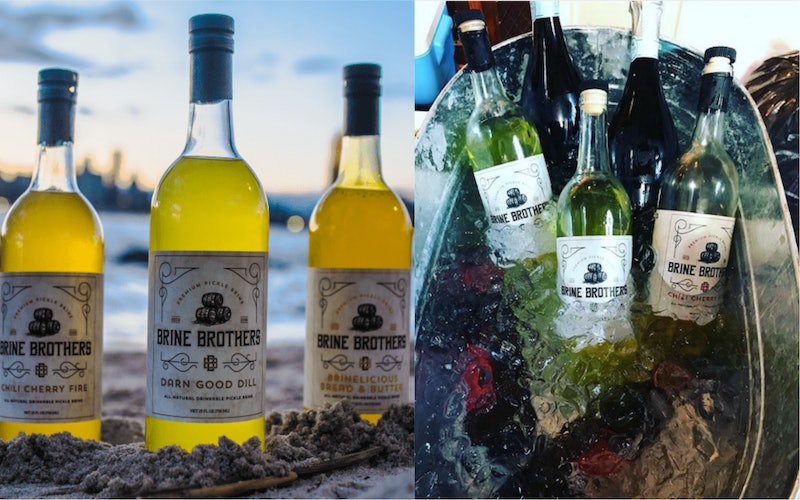 Given the proliferation of all things pickle- and brine-flavored recently, it was really only a matter of time before I started wondering, “Gee, I wonder if pickle wine is a thing?” After all, I did just discover that pickle beer exists, on top of my existing knowledge of pickleback shots — so why not wine? Well, as far as I have been able to determine pickle wine is not a thing — but that’s OK, because it turns out that pickle brine that comes in a wine bottle is a thing. It’s made by New Jersey-based company Brine Brothers, and, well… the bottle is honestly prettier than some actual wine bottles I’ve seen in my time. So, y’know, if drinking your brine either out of a can or straight out of the pickle jar isn’t classy enough for you, you’ve got options. Life is a rich tapestry.

According to Drink Me Mag, friends Harris Derner and Michael Belicose teamed up to create Brine Brothers in 2016 — and somewhat hilariously, the whole thing came from one common problem with which many of us can probably relate: Hangovers. On a recent episode of the web series WTFood?, Derner told Delish’s Lindsay Funston that at one point, he noticed that the only times he would wake up after a night of drinking without a hangover were the nights he drank pickleback shots. He further elaborated to USA Today that, although he enjoyed pickle brine in shots and cocktails as well as a hangover preventative, he had a hard time finding the stuff anywhere but in actual jars of pickles. So, he and Belicose decided that if they couldn’t find pickle brine available just on its own, then they were going to start a company that would solve their own problem — and voila: Brine Brothers was born.

It’s worth noting that there really isn’t any such thing as a “hangover cure”; as Live Science noted in 2008, there are so many symptoms that go along with hangovers that there isn’t really one single thing that can address all of them. But although you can’t expect to knock back a suggested hangover remedy and magically begin to feel better in minutes, there are a few things you can do to help — and drinking pickle brine might be one of those things. Alcohol is a diuretic, so you’ll definitely need to hydrate to get yourself back in top form again; accordingly, those who believe in pickle brine as a hangover remedy claim that the salt and vinegar help your body replenish its electrolytes, or that the salt in the brine will encourage you to drink more water.

As Medical News Today notes, it’s worth remembering that there is conflicting scientific evidence about whether pickle brine helps athletic performance due to the sodium content or electrolytes; nor is the idea that drinking pickle brine inspires greater water consumption backed by any research. Some folks swear by it, though, so if you think pickle brine helps you feel better after a night of heavy drinking, then go ahead and drink it.

Brine Brothers’ pickle brine comes in three varieties: Darn Good Dill, Chili Cherry Fire, and Brinelicious Bread and Butter. Darn Good Dill is a classic dill pickle brine for the purists in the house; Chili Cherry Fire packs a punch with hot red peppers; and Brinelicious Bread and Butter brings the sweetness of bread and butter pickles to your glass. Each type of brine comes in a classy, 25 fluid ounce glass bottle; they’re $8 a pop, or $34 for a three-pack. You can even get a variety pack with one bottle of each type, if you just can’t choose which to grab.

The brines are “best enjoyed when chilled to 38 degrees,” according to the Brine Brothers website — but that’s if you’re going to drink them straight-up. They can also be used to cook, as in the Pickleback Chicken Wings recipe linked to from the Brine Brothers website — or you can even use it to make actual pickles. All you really need to do is pack the veggies of your choice in a jar with pickle brine and let ‘em sit for a while.

You can buy Brine Brothers’ bottle pickle brine online from their website; head there to hit the shop. May all your pickle-flavored dreams come true.