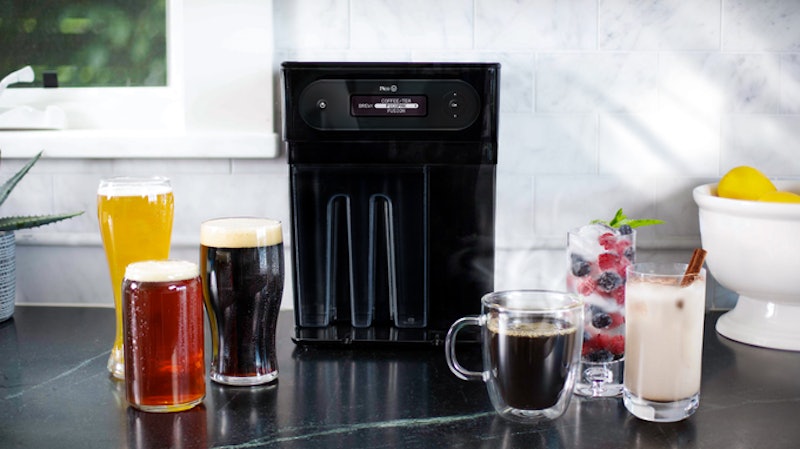 If you’re a fan of DIY craft beverages — like local beer, or single batch kombucha — you’re in luck: Today, the makers of PicoBrew are launching a Kickstarter campaign for the Pico U, the first-ever universal beverage appliance that lets you make craft beer, coffee, and even custom kombucha all from the comfort of your own kitchen — and all from the same device.

PicoBrew has invented and crowdfunded super cool brewing appliances over the past eight years — including the Pico Pro and the Pico Model C — but the Pico U would be the most compact, counter-friendly, and versatile product to date. While other PicoBrew products provide a convenient way to brew craft beer at home, the Pico U can brew a wide array of customized beverages. According to the Kickstarter campaign, you can use the Pico U to “brew a refreshing pitcher of iced horchata, ginger lemon kombucha, citrus dry soda, yerba mate chai tea, vanilla cocoa cold brew, golden milk, and more.” Of course, you can also still brew your craft beer with PicoPaks, and if you want, you can also make the perfect cup of pour-over coffee for yourself using the device.

Following the success of the original PicoBrew models, the company created new brewing technology for the innovative device. The Pico U utilizes “precise temperature control” to customizes the water temperature at different stages of brewing depending on your drink of choice. Additionally, PikoPaks — small, biodegradable brewing mixtures — can be used to create the perfect beer with just the right amount of balanced flavor. “With up to 4 [sic] stages in one recipe, Pico U can use high heat and flow rates to extract rich flavors, and then mellow things out to tease out subtle aromas without overheating delicate ingredients,” PicoBrew explained on the Kickstarter page.

Bill Mitchell, a former Microsoft executive and engineer, co-founded PicoBrew with his brother, Jim, and another former Microsoft engineer named Avi Geiger in 2010. Mitchell told USA TODAY that in order to achieve “the grand goal of getting [a Pico U] on every counter, we knew we had to reduce the size and the price, too.”

According to the Kickstarter campaign, you can preorder a basic model of the Pico U that brews coffee, tea, and other beverages — with the exception of beer and other carbonated drinks — for $169. Or, you can opt to preorder the Pico U Deluxe, which makes beer along with all other beverages, with a pledge of $189 or more. Investing in a Pico U may be a good idea if you’re an avid coffee drinker, or if you like craft beverages because, let’s be honest, buying kombucha or craft beer on the regular can add up quickly. The fact that you can customize your drinks to your personal tastes? Even better. Not to mention, when the Pico U Kickstarter campaign is over, USA TODAY reported the brewing devices will retail for $249 and $299 in stores and online. So, if you’re thinking about purchasing a Pico U, it’s definitely better for your budget to buy it sooner rather than later.

"We think if you get there with the right price point, the right utility and the right physical size, we can realize the vision of getting the world brewing and they can brew a lot of different things,” Mitchell told USA TODAY about the Pico U. “We think this universal beverage machine just opens up this whole new realm of creativity that goes way beyond beer." So, if you’re all about creating signature drinks, the Pico U is right up your alley.

More like this
How To Use The Like To Know It App To Buy Influencers’ Faves
By Emma Carey
I Tried The $20 TikTok Viral Oishii Strawberries — Here's What I Thought
By Sophie Hanson
Trust Me, Pickle Martinis Are The New It Drink Of The Season
By Emma Carey
The Finger Lickin’ Good KFC x HYPE Collab Serves A Bucket Bag For Chicken
By Darshita Goyal
Get Even More From Bustle — Sign Up For The Newsletter