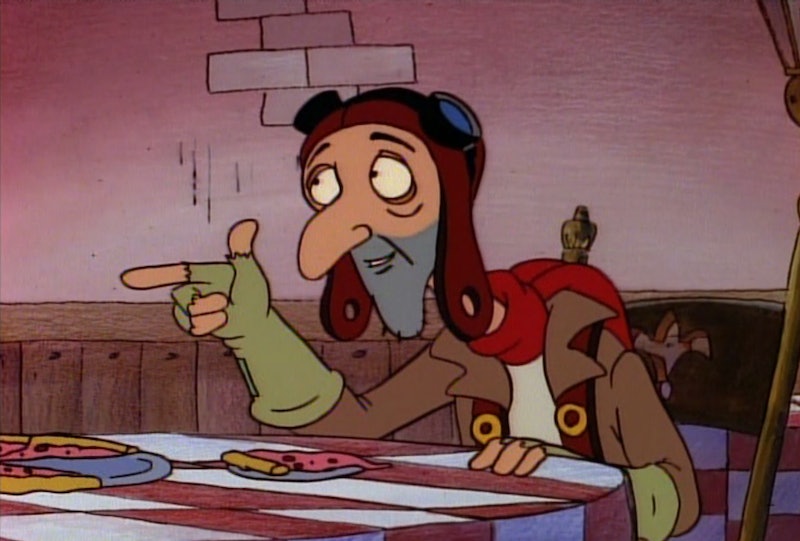 Usually, watching your favorite childhood shows is just a fun, nostalgic way to take a break from being a grown-up. But sometimes, seeing those classics as an adult makes you notice the deeper meanings that went totally over your head as a kid. That's probably how the Hey Arnold! Pigeon Man theory started circulating on Reddit and making '90s kids question everything. The theory posits that rather than flying off into the sunset with his beloved pigeons at the end of the episode, Pigeon Man committed suicide in front of Arnold, who remembered it differently to cope with the trauma. Yeah, it is dark.

Luckily, in an interview with Bustle at San Diego Comic-Con, Hey Arnold! creator Craig Bartlett not only addresses the theory, but reveals that we'll be seeing Pigeon Man's fate for ourselves in Hey Arnold!: The Jungle Movie when it premieres on Nickelodeon later this year.

Pigeon Man returns in the movie not only because Bartlett wanted to show fans every single one of their favorite characters, but because he hoped to put that theory to rest. "There was a kind of stupid internet rumor that 'Pigeon Man' was a suicide show, which really, really irritates me because there are a lot of things about that that are wrong," Bartlett says.

"They made it sound like we wrote a suicide story and then the network wouldn't let us do it and then we had to write some ending that was OK. ... No, the network didn't make me do anything, we wanted to tell a story and we told it."

According to the series creator himself, at the end of the episode, after giving Arnold a moving speech, "[Pigeon Man] gets on his pigeons and flies to Paris." So we can officially all breathe a sigh of relief that we didn't watch something utterly tragic as kids without realizing it.

Just in case there's anyone who doubts Bartlett, he tells Bustle that Pigeon Man will be seen on the roof in The Jungle Movie, so all fans will know with certainty that he is alive and well.

And that's not the only lingering Hey Arnold! mystery that the movie will resolve. "I knew just from comments over the last 10, 15 years what people were dying for, so I just made a list," Bartlett says of how he went about writing The Jungle Movie.

So if those questions have been plaguing you since Hey Arnold! went off the air in 2004, you won't want to miss The Jungle Movie. But until then, remember to always wash your berries before you eat them, and fly towards the sun.