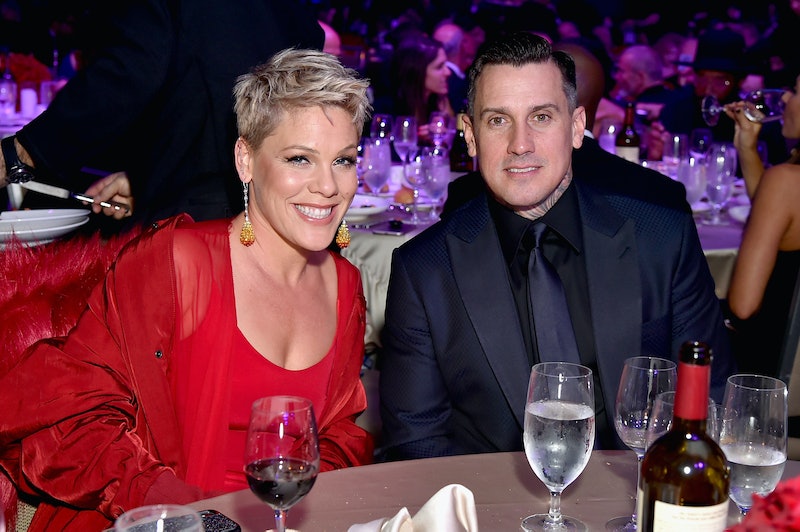 Valentine's is over but, y'all, any true romantic knows that real-life love is 365 days a year. And it's always great to have some positive celebrity role models to give you that cute AF relationship goals vibe. Especially when the couple in question are open and honest about the realities of actually being in a relationship. The timeline of Pink and Carey Hart's relationship is as real as you can get, and has led to them being known as one of the strongest couples in showbiz.

The pair have absolutely had their ups and downs, but who hasn't? Pink once revealed that she got so furious with Hart that she slashed all the tyres in one of his cars. Speaking on the Ellen show, Pink explained how she managed to cut herself so badly in the process that she ended up having to get 13 stitches. Although that was one pretty intense incident, her openness about the highs and lows of their relationship is refreshing, real, and relatable. And, in allowing themselves to be complex humans, Pink and Hart seem to have found the secret to a successful marriage and being great parents to two cute AF kids.

So, where did it all begin?

Hart, a competitive motorcross racer at the time, was competing in Pink's hometown Pennsylvania. They met and, needless to say, cupid drew back his bow and the pair began dating. After a wee while, she asked Hart to appear in her famous Just Like A Pill video, and he accepted, he revealed in an interview with the Daily Telegraph.

It was only for a short time, y'all, but fans were worried that this was it for the cool AF pair. Emo fringes are good for hiding tears though, y'all.

Not one to be constrained by nonsensical gender norms, in 2005, Pink went ahead and popped the question. And in a super romantic way. The singer wrote the question "Will You Marry Me?" on a board and held it up on the sidelines of one of Hart's races. He pulled over and, of course, said yes.

Yes, Pink made an honest man of Hart in 2006 in a Costa Rica ceremony. The singer wore a gorgeous white dress with a jet black sash that looked flipping amazing.

The pair split up for just under a year in 2008 due to busy schedules. In an interview with redbook, Pink explained the heartwarming way that she and Hart got back together:

"Eleven months after we broke up, he asked me to fly to Las Vegas to perform on New Year's Eve at his club ... [A]fter sound check I told him that he needed to come to my room. I had made him a photo album of all the cards he had ever given me, of all the photos of our entire relationship. I spent months on this album. On the last page, I pasted a photo of me from a really bad movie I made years ago with my neck slit and blood everywhere. Next to it I wrote, 'This is me without you.' On the next page, there was a picture of a baby. And I wrote: 'The rest is unwritten.' The divorce papers that we never signed were behind that page. I was like, 'The rest is up to you.'"

That year, Hart made another appearance in one of Pink's music videos. This time it was for the incredibly catchy So What.

Pink and Hart welcomed their first child into the world in 2011, and speaking to the Guardian, Pink low-key gushed about what a super dad he is: "He’s like a rock. He’s a good man. He’s a good dad. He’s just the kind of dad I thought he’d be and then some".

Making a perfect quartet, little Jameson was born in 2016.

Today: Living Happily As A Family In Sunny California

Proof that life is a bunch of ups and downs and not necessarily an easy ride, but totally worth it, Pink and Hart are one of the most goals AF couples in the celeb sphere, and, along with their two young children, they make an adorable foursome.