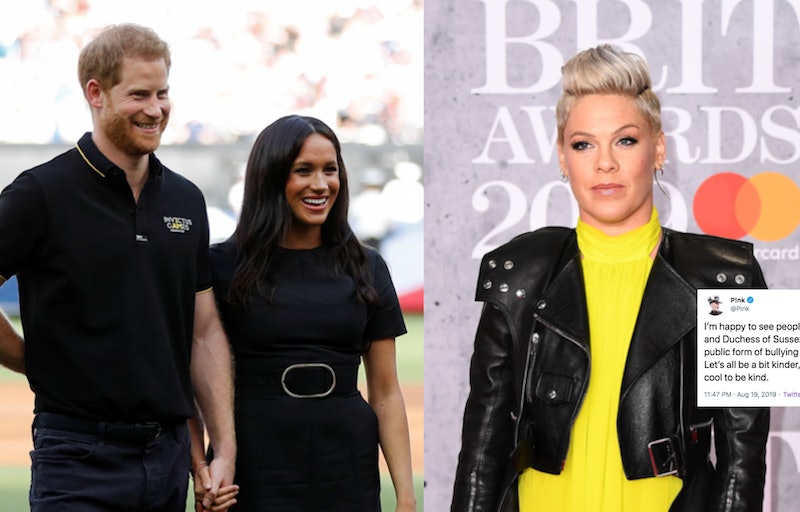 The list of celebrities who are more than willing to voice their support for the Duke and Duchess of Sussex continues to grow. The royal couple received an unprecedented amount of backlash this week from multiple outlets, criticizing their recent use of private jets despite their ongoing fight against climate change. But now Pink is defending Prince Harry and Meghan Markle's character, calling this attack from the press "the most public form of bullying" she's ever seen and suggesting that everyone try to show a little more kindness to people in general.

"I’m happy to see people coming to the defense of The Duke and Duchess of Sussex," read the singer's tweet, which she posted on Monday, Aug. 19. "The way people treat her is the most public form of bullying I have seen in a while. It’s out of control. Let’s all be a bit kinder, huh? Let’s show our children that it’s cool to be kind."

However, Pink isn't alone in coming to Prince Harry and Markle's aid. Shortly after British tabloids began attacking the couple's character, Sir Elton John stood up against the "distorted and malicious" criticism by posting a heartfelt message on his personal Instagram account. John felt obligated to defend Prince Harry's character, not only because of his close friendship with the late Princess Diana, but also because one of the private jets had been used by the royal family in order to visit John's home in Nice, France.

"After a hectic year continuing their hard work and dedication to charity, David and I wanted the young family to have a private holiday inside the safety and tranquility of our home," John explained in the post, while adding that the private jet was for the royal couple's own protection:

"To maintain a high level of much-needed protection, we provided them with a private jet flight. To support Prince Harry’s commitment to the environment, we ensured their flight was carbon neutral, by making the appropriate contribution to Carbon Footprint™"

Meanwhile, daytime talkshow host Ellen DeGeneres also voiced her opinion over how unfairly she felt the Duke and Duchess were being treated, especially given all of their generations contributions to charities and vital causes. "Portia and I met Prince Harry and Meghan in England to talk about their work on wildlife conservation," DeGeneres tweeted on Monday, Aug. 19. "They were the most down-to-earth, compassionate people. Imagine being attacked for everything you do, when all you’re trying to do is make the world better."

Of course, this is not the first time Prince Harry and Markle have faced public scrutiny. Many celebs have spoken about how unfairly the duo is treated on pretty much a daily basis, particularly when it comes to the U.K. press. Actor George Clooney touched on the matter during an interview with Good Morning Britain, which took place back in March. "‘It seemed a little unjust, she hasn’t done anything except live her life," Clooney said at the time, as per People. "She’s a really kind, intelligent woman."

Let's just hope that both people and the press can keep Pink's sentiment in mind and bring a little more kindness into the world moving forward.