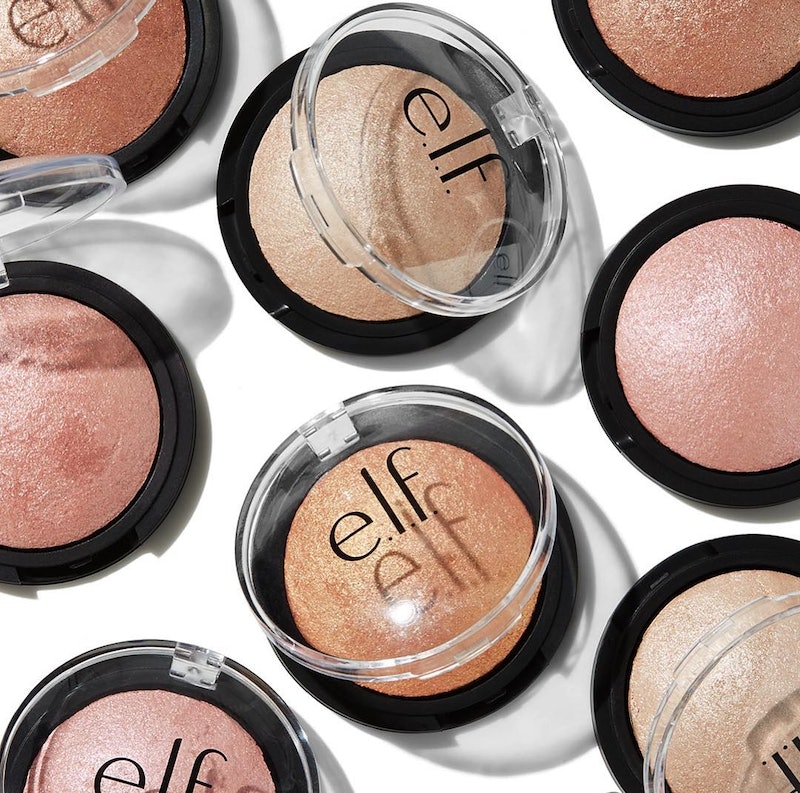 Everyone loves a good affordable fine. Whether it's foundation, primer, blush, or whatever your product of choice is, who doesn't want to save some cash on their beauty routine. After all, it's expensive out there. Now, you can cop Pinterest's most popular highlighter on the cheap, and for such a low price, why not take a chance on a new way to get your glow going.

According to Allure, Pinterest's most popular highlights include ELF Cosmetics' Baked Highlighter. If you're familiar with drugstore makeup (and isn't everyone?) and aren't lucky (or wealthy) enough to buy all your beauty goods at Sephora, the name ELF will certainly ring bells. The brand has built up a reputation for offering some of the most affordable products in drugstores. From brushes to eyeshadows to magnetic face masks (yes, really), it seems that ELF has expanded their selections in a major way over the past few years, and people are taking notice.

This time, it seems that it's their highlighters that beauty fans have noticed. ELF's Baked Highlighter comes in three different shades and can be purchased anywhere from Target to ULTA to the ELF website. The best news, though? It's the cost. One of Pinterest's most popular highlights is only $4. Yes, you read that right. In even better news, according to the Target website, the retailer is selling the product for a mere $2.99. Since the price is right, is this your new holy grail?

The highlight comes in three different shades: Moonlight Pearls, Blush Gems, and Apricot Glow. But do they work? An affordable highlighter may be popular online, but in real life, what's the tea? Thankfully, that's what the world has beauty gurus for, and they've certainly tested this ultra-shoppable product before.

Guru Tati Westbrook loves the Baked Highlighter. While she admits that it's not going to give you a blinding metallic glow, she does give it a major compliment by comparing it to the Hourglass Ambient Lighting palette, a luxury highlighter that retails for $62 at Sephora.

Sylvia Gani didn't give the ELF highlighter a good review the first time she tried it, but, as it turns out, there's a trick to this affordable find. Subscribers explained to her that you need to scrap just a bit off the top of the product. Once she did, Gani definitely approved.

As for Laura Lee, she wasn't much of a fan of the product, but she did have another hack on how to use it. According to her video, you should try wetting your brush before applying the highlighter. Perhaps that combined with scrapping off the top could make this a must-have.

ELF wasn't alone in its inclusion in Pinterest's roundup of top highlighters, though. There was actually a list of five, and while most were most high-end products. ELF did have an affordable friend.

According to Pinterest, ColourPop's Super Shock Cheek Highlighter is the other affordable option if you need to get your glow on. For fans of the brand, that shouldn't come as a surprise. ColourPop's highlighters have long been one of their staple products, and at only $8 each, they're a steal compared to higher end brands. Plus, if you've seen gurus apply these beauties, you know just have intense their payoff is.

If you're looking to save money (and who isn't?), now may be the time to check out Pinterest's most popular highlighter. With ELF's $4 Baked Highlighter and ColourPop's Super Shock Cheek Highlighters on the list, there's no reason not to have the best glow on the block.