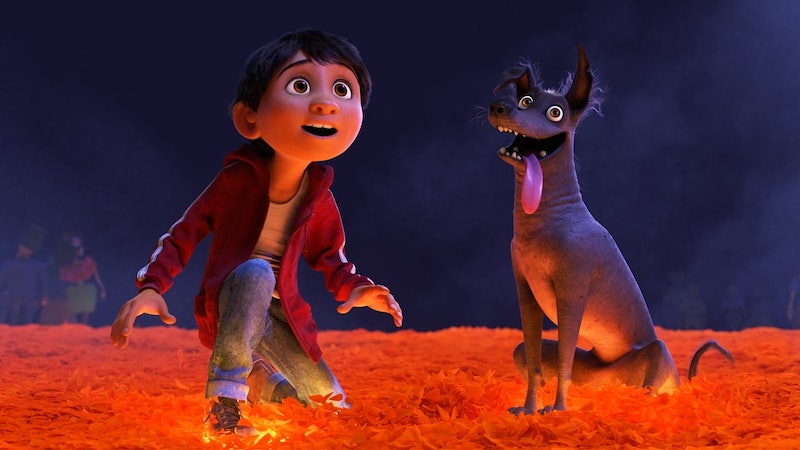 There’s a scene in Pixar’s new movie Coco where the main character’s great grandmother, the eponymous Coco, sees an old photograph of her absent father, his face having long been torn out by Coco’s embittered mother. “Papa!” the old woman cries, briefly waking from her Alzheimers-like stupor. It’s a heartwarming moment, but it's deflated by the guitar Coco's father is holding — bone white with a calavera-shaped headstock, the strings coming forth from the skull’s hollow eye sockets. The guitar's design is cliche Mexico — which isn't surprising considering that Coco, a movie about Dia de Muertos, frequently reduces its imagery to heavy handed stereotypes.

In a lot of ways, Coco represents progress for non-white representation in animated movies. In 1943, Disney made its first foray into depicting people of color with Saludos Amigos (Hello Friends!), which sees Donald Duck and Goofy travel to various countries throughout Latin America. Yet they speak to and see very few Latin Americans, and the residents of a traditional Andean village shown in the film are all the same coppery brown and possess similar facial features to the stock Natives in Peter Pan. Only two Latinx speak in the whole film: a red-faced Peruvian child who has only one line, and a Brazilian parrot named José Carioca, who teaches Donald how to Samba. The vast majority of the film consists of Donald, Goofy and the animators interacting with stubborn animals and the scenery, devoid of any troublesome non-white inhabitants.

In the years since, there's been plenty of change — some for the better, some for the worse. In movies like Aladdin, Mulan, The Lion King, and Pocahontas, the animators seemed to take joy in featuring non-white environments and creating non-white protagonists — while playing fast and loose with the geography and culture (why is Jasmine, a Persian inspired princess, living in India’s Taj Mahal, for instance?). The last decade or so, though, has seen substantial growth, as shown by last year's Moana, with Vanity Fair reporting that Disney hired an "Oceanic Trust" of anthropologists, artists, cultural experts — not to mention almost entirely Polynesian cast — to tell the Polynesian story.

But Coco is a mixed bag. The movie started out with controversy, as in 2013, Disney's attempt to trademark the name "Dia de los Muertos" for the project was met with harsh rebuke by many in the Chicanx community. To the credit of all parties involved, Disney stepped down, hired Mexican-American cartoonist and critic Lalo Alcarez as a consultant, and then built upon the processes of cultural competency it had used with Moana. As shown by IMDB, the studio hired a Mexican-American lead writer and co-director, and also hired at least three Mexican descendant cultural consultants and an all-Latinx lyrics team.

And for the most part, it pays off. The movie brings the viewer into Mexican history and culture, featuring cameos by an eccentric Frida Kahlo and a silver-masked El Santo (an iconic Mexican luchador) along with the typical Pixar Easter eggs. Miguel's story is even accompanied by a papel picado narration, literally giving life to the colorful banners strung during festive occasions. Throughout the film, characters slip from Spanish to English as if it's the most natural thing in the world — which, for many of us, it is.

Perhaps the most touching ode to Mexican Americans, though, is in the animation style. The realms of both the living and dead brim with painstaking detail. Close-up shots of Miguel's face show every freckle, and the thicker, slightly coarser hair follicles that many mestizos run their fingers through every day. Brown people get precious few chances to see themselves portrayed onscreen, and so to see our skin and hair treated with such love and care and nuance is world-changing.

If only this effort had been extended to Black Latinx as well. Mexico is a diverse country, yet there is no one in the realms of Coco — living or dead — who is darker than copper. Latinx are already largely erased in Hollywood, with Latinx characters making up just 3.1 percent of 900 movies released in 2016, according to a study by the Media, Diversity, & Social Change Initiative at the University of Southern California. So why must we make things worse by erasing all those who do not fit a U.S.-centric view of how Latinx people, specifically Mexicans, look?

It's easy, possibly a reflex, for Mexican-descendant people to be hypervigilant for the insults and stereotypes thrown at us. When even other Latinx refer to Mexicans derogatorily, insinuating that we’re only around illegally and rely on day labor to get by, and when white people consume tacos, Frida Kahlo, and sugar skull face paint like popcorn then spit out our people like kernels, and when we've heard these messages since childhood, we train ourselves to identify micro-aggressions as efficiently as possible. And to some people, Coco might not seem offensive at all; star Gael Garcia Bernal recently told Bustle that "we're kind of done with" Mexican stereotypes overall, as "in this time that we live in... there’s no room for those pejorative representations."

But that's not to say that our frustration isn't warranted. Coco depicts a large, clustered family, fiery tempers, irresponsible fathers, and a wily vagabond’s attempts at illegal immigration, all Mexican cliches we've seen on-screen far too often before. Still, some of what Coco does in terms of representation is truly good to see. There's the stern yet loving Abuela, who wields her huarache like a boomerang; the industrious, caring, tight-knit family trying their best to help Miguel grow into a reliable, stable adult; the all-too-common tension between honoring your family and forging your own destiny; the wry smattering of morbid humor; and the nuanced group of characters and body types to love. The bilingual soundtrack, too, bops along with Mexican pop, techno, folk, and Mariachi, and the stars, particularly 12-year old Anthony Gonzalez (Miguel), bubble over with warmth and depth.

So can the two sides balance out? Do the ugly reminders of history and the use of cliche pollute Pixar’s colorful universe no matter what good Coco contains, or does a white-owned company's decision to tell a complex story written, directed, cast, and assisted by Mexican-descendant artists become its own sort of revolutionary act? There's no one right answer, but Coco will, most certainly, leave you thinking long after you leave the theater.