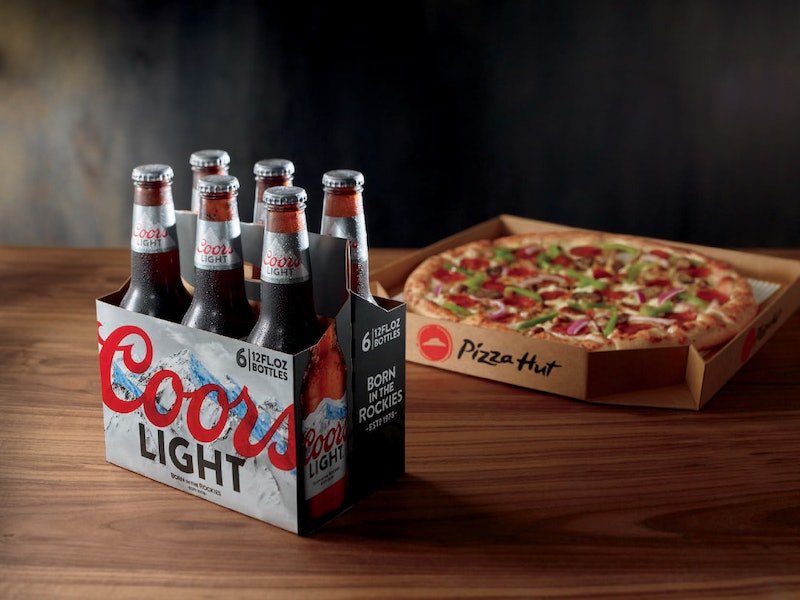 What is a more quintessential party menu pairing than pizza and beer? Nothing, that's what. For decades people having enjoyed the two while watching football and celebrating birthdays, not to mention as staples for every college party. The only downside is that historically, you have needed to make two stops on the way home from work to snag both your pizza and your beer. Now that Pizza Hut is delivering six-packs of beer with its pizza in a new test program, they're removing that extra step, and make this predicament a thing of the past. In fact, a press release announces the chain plans to expand its beer delivery program to more than 100 stores across Arizona and California.

According to AZCentral, Pizza Hut first began to offer six-packs of the beverage for delivery at select locations in Arizona late last year. Its location at First and East Pierce streets in Phoenix was the first franchise in the country to offer the service. The new promotion, a partnership with MillerCoors LLC, will offer free delivery to customers who order a six-pack of Coors Light, Blue Moon, or Miller High Life with their online or mobile pizza order. The beer will be delivered in a cooler so as to ensure it is cold upon arrival to customers.

"Offering beer delivery has enabled us to provide a service to our customers that others cannot, which has proven to be successful during the first few months of the pilot. As a Pizza Hut franchisee," explained Mark Peterson, owner of HOT Pizza, a Pizza Hut franchise, in the press release. "I'm always looking for ways to innovate my business, and beer delivery is a great way for us to deliver an even better experience for our customers."

Zipporah Allen, the chief market officer of Pizza Hut, further explained the decision: "Many Pizza Hut restaurants are already licensed to serve and distribute beer, without third party services, additional fees, or extended wait times. Expanding the pilot program is a natural way for Pizza Hut to get our customers the perfect pizza and beer combo they're craving, delivered right to their doors."

Pizza Hut may be the first big pizza chain in the country to offer the option of beer delivery, but it's not the only casual eatery chain experimenting with boozy additions to its repertoire.

Earlier this year, Starbucks announced the addition of a Reserve Store to its corporate headquarters in Seattle. A collaboration with Italian bakery Princi, the Starbucks Reserve Store serves the full Princi menu which includes soups, salads, artisan breads, and pizza. But, the highlight? A full mixology bar that serves traditional Italian cocktails as well as local beer, wine, and liquor. Notable bar menu items include an Aperol Spritz, a Milano Torino, and a Negroni Sbagliato. The coffee chain experimented serving alcohol at traditional storefronts in the past, with the company adding beer and wine to the menu of upwards of four hundred stores in 2010. Due to a shift in focus, though, the promotion ended at all stores in 2017, Forbes reports.

Select locations of supermarket chain Whole Foods also offer customers the chance to sip a little rosé while they shop. For $5, customers can enjoy a glass during Wine Down Wednesdays promotion.

But, it is hard to improve on the perfection that is beer and pizza. Folks in Phoenix, Tucson, Glendale, Prescott, and Winslow, Arizona, as well as those in Los Angeles, Bakersfield, Riverside, Sacramento, Santa Barbara and Santa Clara can get their beer and pizza fix now. The service will reportedly be expanding to restaurants in Anaheim, Fresno, Huntington Beach, and Redding late on this month.