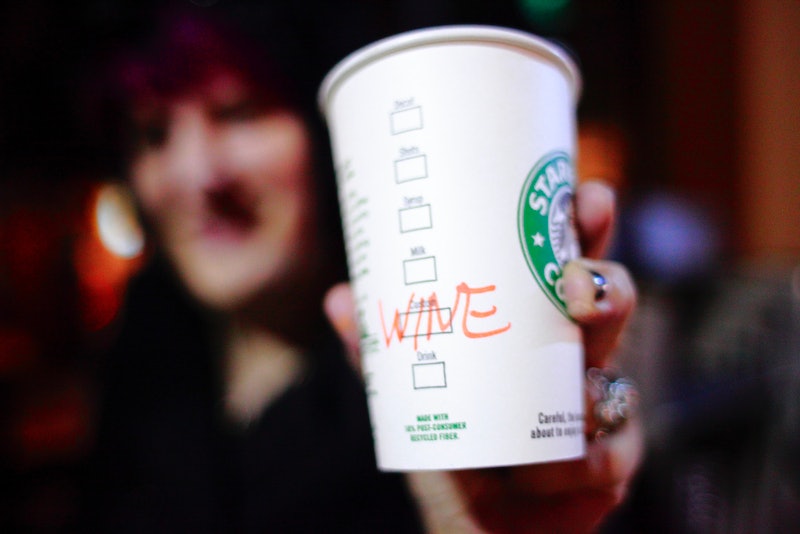 According to Mercury News, Starbucks has applied for liquor licenses for 15 Bay Area locations. If the licenses are granted, these locations will join the 37 (by my count, at least) other Sbux spots that currently participate in the “Starbucks Evenings” program — a sort of evening-long happy hour during which, from 4 PM onward, participating locations serve wine, beer, and a fancy-schmancy small plates menu in addition to the coffee chain's usual offerings.

Not going to lie, guys — from what I can see from the Starbucks website, that small plates menu looks pretty tasty. I mean, Starbucks isn't usually the first place I go when I want food — for me, it usually falls under the “I desperately need a sandwich and this is the only thing around” umbrella — but bacon-wrapped dates with balsamic glaze? Artichoke and goat cheese flatbread? Truffle mac and cheese? I think I speak for many of us when I say, sold!

The Starbucks Evening program, by the way, isn't new; we first got wind of its beginnings in 2012. The idea even predates that particular tidbit, though: According to The Street, there's even one location in Portland, OR that's been serving booze since 2011 (for the curious, it's the one outside the ground floor exit of Powell's City of Books in the Pearl District. All of that means nothing to me, but I assume Portland residents will understand) — and in 2010, the chain began testing wine and beer at a Seattle location (the one on Olive Way. Again, this means nothing to me, but it probably means something to folks who actually live in Seattle). Over the years, some 37 locations in the U.S. have joined the program, mostly in metropolitan areas: Chicago, LA, Atlanta, Washington, D.C., and Orlando, in addition to Seattle and Portland.

So how do residents of San Francisco and the Bay Area feel about Starbucks Evenings coming to their neck of the woods? As you might expect, it's a bit of a mixed bag. One resident, Christine La Monaca, told KTVU, “I think being open later and having a small drink menu would be good"; however, another — Michael Tardiff — said, “There are so many other great areas to… get happy hour and stuff in San Francisco, so no, it probably wouldn't be my first place.” One person speaking to Mercury News brought up my own thoughts on the matter: Said Maria Sanches, “It seems kind of weird. I've always seen [Starbucks] as a coffee place, so I don't know how that's going to work out. For a glass of wine I would probably go to some other place.”

At the same time, though, it makes a certain amount of sense. We've probably all arranged to meet a friend for coffee after work at Starbucks at some point in our adult lives; it's easy, it's convenient, and they're everywhere. You can still get everything on the regular Starbucks menu once 4 PM rolls around, so look at it as a neat addition — if you thought you wanted coffee, but decide that you'd really like a glass of wine instead, you don't have to go through the bother of finding a new spot to meet. And with places like Chipotle and Taco Bell serving alcohol (or rather, almost serving alcohol, in Taco Bell's case), I wonder if maybe fast food and fast casual places with booze might not be the way of the future.

In any event, though, Starbucks still has to jump over the hurdle of actually getting those liquor licenses approved before it can start serving alcohol in the Bay Area; as such, you may not want to get too excited just yet. Still, though — it could be fun, no?