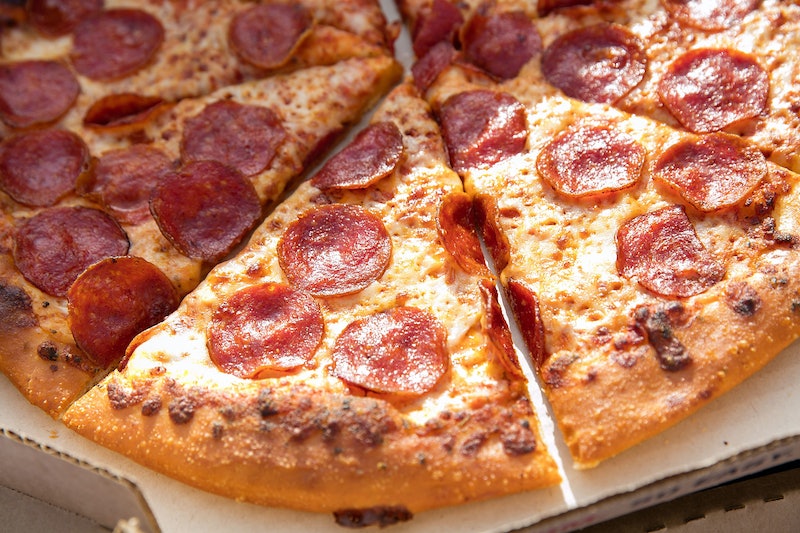 If you're the kind of person who thinks Prince Harry and Meghan Markle are a great couple but nothing in comparison to combination of pizza and wine, you're going to absolutely swoon over this news break: Pizza Hut is now delivering beer and wine — starting now.

No, it's not something you dreamed up during a hangover couch nap on a Sunday afternoon, it's a real thing that Pizza Hut announced in an interview with CNNMoney. According to the company, they're fully aware of the fact that many customers are pairing their pizzas with booze every time they order, because it's just a known fact that alcohol brings out the pizza in pizza. So, to make things easy for us all, they're going to start toying around with the idea of delivering pizzas with a side of booze, and that pilot program process starts today. Thank your lucky stars, your dreams are coming true. Dragging yourself to the liquor store in your pajamas when you just ordered delivery pizza so that you wouldn't have to leave the house, totally defeats the purpose.

Beginning with the very lucky Phoenix, Arizona, six-packs of Anheuser-Busch brands — including Budweiser, Bud Light and Shock Top and Kilt Lifter, which is made by Arizona-based craft brewer Four Peaks — will slowly start to be tested out in delivery for a flat fee of $10.99. Then, starting in January, the company will add wines to their delivery drinks menu. The concept, while to us might sound revolutionary and epic, is actually a pretty logical next step for the company that already serves beer and wine in many of their restaurants. Essentially they're just trying to better translate their in-dining experience to their delivery dining experience. And I think I can speak for everyone here and say: we approve. Send us all the pizza and all the booze.

Oh, and fun fact: if you're sitting there wondering how your delivery driver is possibly going to show up with a hot pizza and a cold beer, know that Pizza Hut is a few steps ahead of you. While they have a state-of-the-art hot delivery bag that keeps the pizza warm and crisp, they've also created a booze bag that keeps things just the right temperature. And because the booze won't be coming to you through a third party, you won't have to pay any extra hidden fees. Yes, they really do think of everything.

Before you start bawling your eyes out and cursing the company for leaving you and your city out, know that they're totally hinting at a nationwide adoption of this service. While there's been no official confirmation about the plan's expansion, all signs point to Phoenix acting as a test kitchen for this epic update. You know, they just want to see how smooth it runs, see what the feedback is like, see which beers and wines people are excited about, and make some changes before they add this option to all of their delivery menus. So while it might be a bummer if you don't like in Phoenix, it's actually better for everyone that they take some time to figure out how to best run this operation, that's surely going to be a big hit.

In the meantime, just remember that you can also order cookies, brownies, mini apple pies, and icing dipped cinnamon sticks along with your pizza — surely that will tide you over until your city is granted access to the golden delivery booze menu, won't it?