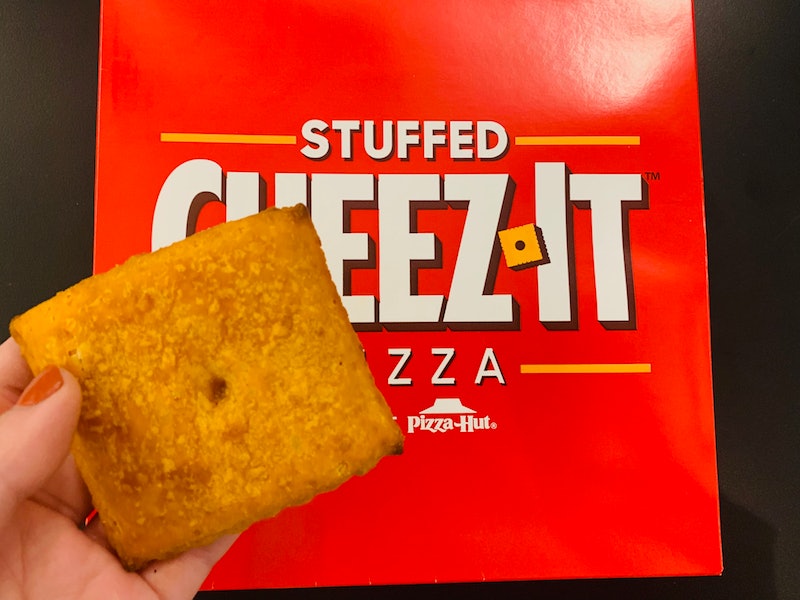 As someone whose body composition is maybe 11% water and 89% Cheez-Its, I am delighted to inform my fellow cheese lovers that there is yet another Cheez-It innovation on the horizon — the likes of which we mere mortals could probably never fathom on our own. Pizza Hut launched a Stuffed Cheez-It Pizza today, which is, thankfully, exactly as it sounds: A Cheez-It which has then been stuffed with more cheese, cannibalizing itself and, in the process, making all of our dreams come true. It's available nationwide starting Sept. 17 for a limited time, which is to say, it looks like I know what I'll be eating for dinner for the next few weeks.

Per Pizza Hut, the new creation is comprised of "baked jumbo squares topped with that distinctly sharp, real cheese taste you know and love from Cheez-It baked to toasty perfection," which is then "stuffed in true Pizza Hut style with either cheese or pepperoni and cheese, served up with a side of marinara dipping sauce." The Stuffed Cheez-It Pizzas will come in packs of four, with a regular menu price of $6.49, and the cosmic price of what I assume is my firstborn, as I have never laid eyes on something I have wanted so much in all of my years on this earth.

I make this alarming statement with confidence, as Bustle had the opportunity to sample the Stuffed Cheez-It Pizzas before they hit the menu. It really does taste almost unnervingly like a Cheez-It — I only use the word "unnerving" because you're then anticipating it to crunch like one, and then what happens instead is so majestic it's almost unholy. You bite into the Cheez-It cheese straight into the Pizza Hut cheese and it's basically like you've cycloned yourself into an unfathomable, glorious cheesy abyss. Which is to say, I ate the first ones of these so fast that I can't really remember what happened between the first and last bite, except that it was very, very good. (My personal opinion is that the pepperoni version was better than the plain cheese, because it added a delightfully savory/saltiness to it, but you truly can't go wrong either way.)

In another week, Cheez-It fans will have another way of ordering the new menu offering when it gets added to Pizza Hut’s $5 N’ Up Lineup on Sept. 25, where it will retail for $6 if you buy two or more items on the $5 N’ Up Lineup menu. That menu includes a lot of delicious combinations of words, like "Double Order Of Breadsticks," "Ultimate Hersheys Chocolate Chip Cookie," "Stuffed Garlic Knots," and "Cinnabon Mini Rolls," which all happen to be the names of the rest of the children I didn't already surrender to Pizza Hut in exchange for the Stuffed Cheez-It Pizzas. There are some delicious days ahead of us, y'all — just make sure to get in on it sooner than later, because this particular cheesy collab is only around for a limited time.