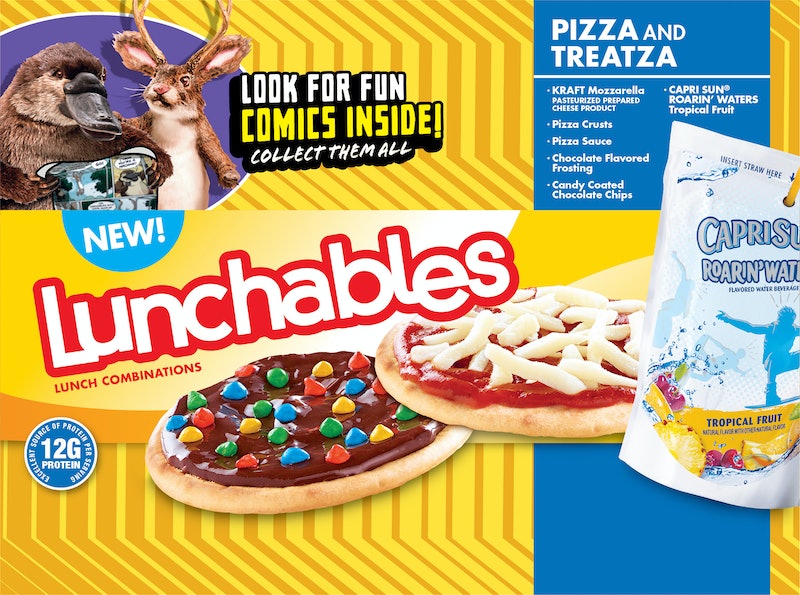 Excellent news, ‘90s kids who are now fully-functioning adults: Pizza and Treatza Lunchables have returned, which means you can absolutely pack yourself one for lunch now. Yes, even when you’re heading to work, not grade school. Seamless? Pffft. Lunchables is where it’s at.

"Lunchables always like to excite their fans with options that bring the mixed up fun to lunchtime," a Lunchables representative tells Bustle via email. "The brand has watched as demand for Lunchables Pizza and Treatza has grown over the years, and thought now, when parents and their kids are gearing up for the school year, is the perfect time to bring back a fan favorite."

According to Delish, the relaunch of this beloved lunch box —which let you make not just mini-pizzas, but also dessert pizzas — includes all the things you remember: A couple of pizza crusts, tomato sauce, and mozzarella for the regular pizza; chocolate frosting and rainbow chips for the dessert pizza; and a Roarin’ Waters Capri Sun to quench your thirst.

Available now (as in right this very minute), they’ll set you back about $2.99 per box and can be found in the refrigerated section of a variety of major grocery stores and food retailers — specifically Target, Albertson’s, Safeway, Shoprite, Meijer, SuperValu, Kroger, HyVee, Piggly Wiggly, Woodman’s, and WM. A representative for the brand tells Bustle that they will remain a permanent product offering.

Lunchables were originally launched in the late 1980s as a way to pick up bologna sales. At the time, they consisted only of little circles of lunch meat, squares of cheese, and crackers, offering the ease of a sandwich with less work required. The timeline is a little hazy, but general consensus is that desserts got added to the line sometime around 1991, with drinks coming along around 1994.

Confession: I actually don’t remember Pizza and Treatza Lunchables. I think I may have aged out of the Lunchables demographic by the time they came around; I have firm memories of eating the cheese-and-crackers version (which was the only one available at the time) in my elementary school cafeteria, and I basically lived off the regular pizza ones during middle school — but those either came with no dessert at all or with miniature chocolate bars, rather than with a whole pizza crust to be decorated in frosting and candy as I saw fit. Clearly I missed out.

However, they definitely made a mark on the part of the millennial and Gen Z generations that do remember them; they've been mourning their loss ever they disappeared. (According to a Lunchables representative, Pizza and Treatza Lunchables were taken off shelves in the early 2000s.) All of this longing and nostalgia has given rise on Twitter to loads of tweets like this one:

As well as a Change.org petition lobbying for the lunchtime favorite’s return.