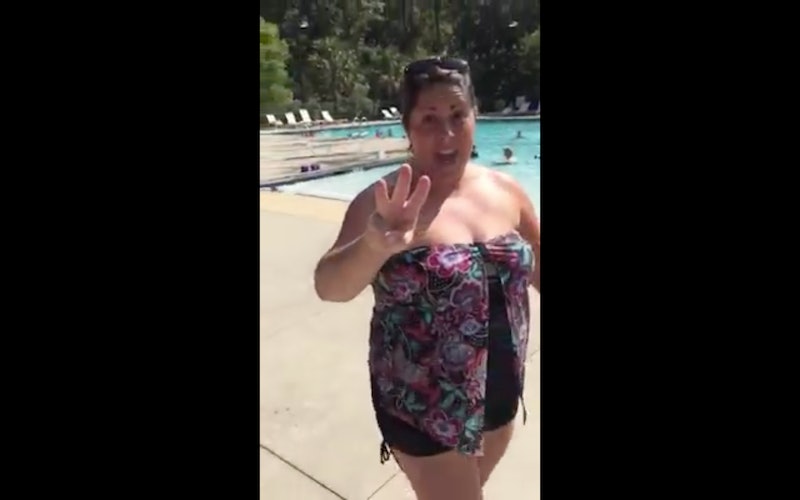 Another woman is joining Permit Patty and BBQ Becky in the ranks of Facebook infamy after calling the cops on black people for minor transgressions. On June 24, Stephanie Sebby-Strempel, dubbed "Pool Patrol Paula," allegedly assaulted a 15-year-old black boy at a neighborhood pool in Summerville, South Carolina, according to multiple reports — and later allegedly assaulted a police officer.

The video posted by the boy's aunt has been viewed 1.4 million times since it was posted about a week ago. Her larger Facebook post, which contains the video and five other photos of Sebby-Strempel and her husband, has 16,278 shares as of this article's publication.

The 38-year-old allegedly told the group of friends that "they did not belong and they had to leave," according to an incident report from the Dorchester County Sheriff's Office, as quoted by The News & Observer.

The 15-year-old boy and his friends had been invited to the neighborhood pool by a friend, the boy's lawyer, Marvin Pendarvis, told The New York Times. "She obviously took a look at them and said they don't belong there," Pendarvis told the newspaper. "She had no reason to single them out. They weren't doing anything."

The News & Observer reports Sebby-Strempel also used racial slurs as the group began to leave the pool. According to the police report obtained by the newspaper, Sebby-Strempel walked toward the 15-year-old and hit him in the chest before following him toward the exit. She then "hit him in the face at least twice," according to The News & Observer.

"No child including mine or anybody else's ever, ever, deserves that type of abuse or treatment or to be struck not once, not twice, but three times by someone that is upset because of the color of someone's skin, and they feel as though they don't belong at their swimming pool," Deanna RocQuermore, the boy's mother, said at a press conference. The boy's name has not been released because he is a minor.

Sebby-Strempel was arrested on June 25, the day after the alleged incident at the pool. USA Today reported that she was arrested on suspicion of third degree assault, resisting arrest and assaulting a police officer. She allegedly pushed an arresting officer into a wall and injured their knee, and then bit another detective's arm, breaking the skin, according to The News & Observer.

She also lost her job as as result of the video's publication. Sebby-Strempel was an independent consultant for a skincare company called Rodan + Fields, according to CNN. "After assessing statements from law enforcement and determining that this former Independent Consultant's actions violate our policies, she is no longer affiliated with Rodan + Fields," the company said in a statement to the network.

Sebby-Strempel was released on a $65,000 bond, according to local TV station WCSC. Her representative at that bond hearing said the charges weren't worrisome. "With regard to that one, we're not terrible concerned with it but will say there are certainly more than one side of the story on that charge," Sebby-Strempel’s rep told the judge.

Sebby-Strempel's case brings to mind "BBQ Becky," as the internet dubbed a white woman who called the police on a group of black men who were allegedly grilling in a part of an Oakland, California park where charcoal grills were not allowed. Last week, a white woman in San Francisco also attempted to call the police on an 8-year-old black girl who was selling bottled water outside of AT&T Park, earning her the nickname "Permit Patty." So "Pool Patrol Paula" marks just the latest in an unconnected string of viral videos showing the police being called on black people for no apparent reason.

More like this
Chris Kaba's Family Continue Fight For Justice After Viewing Police Bodycam Footage
By Sophie McEvoy
These 2 Women Could Be America’s First Lesbian Governors
By Tess Garcia
Women Around The World Are Cutting Their Hair In Solidarity With Mahsa Amini
By Darshita Goyal
Here's What Jeffrey Dahmer's Dad Has Said About His Other Son, David
By Grace Wehniainen
Get Even More From Bustle — Sign Up For The Newsletter