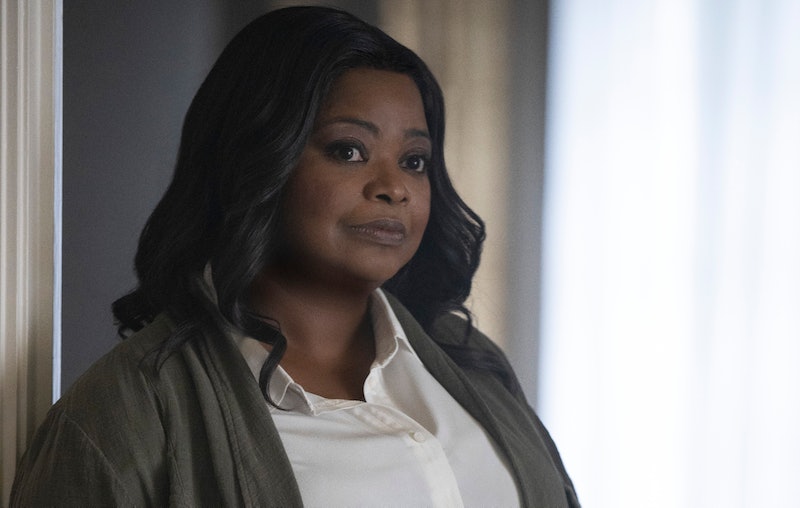 In Apple TV+'s latest series, Truth Be Told, Octavia Spencer plays Poppy Parnell, an investigative journalist who fears that her articles led to the guilty verdict of Warren Cave. The young man was found guilty of murdering Chuck Buhrman and with Warren in prison for 18 years, Poppy revisits the case through a true crime podcast. While there are plenty of true crime podcasts and documentaries out there, Truth Be Told was influenced particularly by Sarah Koenig's Serial podcast. And even though the two cases — and the working relationships between journalist and their respective subjects — aren't exactly the same, Koenig's work certainly influenced Poppy in the new series.

Koenig's Peabody Award-winning series carefully investigated the details of the case against Syed, who was found guilty of murdering his ex-girlfriend Hae Min Lee in Baltimore in 1999. Truth Be Told is based on the novel Are You Sleeping by Kathleen Barber, who shared in a Q&A just how much Serial inspired the book. So it was only fitting that Koenig acted as a consultant on a fictional show about a reporter doing a retrospective true crime podcast that was loosely based on her work.

As Koenig outlined in the first episode of Serial, she had been contacted by a family friend of Syed's to reexamine his case. The connection was that Koenig had previously been a reporter for The Baltimore Sun and had written articles about a defense attorney who had been disbarred — the very same attorney who defended Syed. Poppy's involvement with Warren's case is much more direct. In the Truth Be Told trailer, Poppy claims, "I helped seal Warren's fate with a series of articles." Now, the journalist wonders on her podcast if Warren (played by Aaron Paul) is innocent and if so, if she is responsible for his possible wrongful incarceration.

Spencer told Entertainment Weekly that she spoke to journalists for the role of Poppy "to understand what it means to be the bearer of truth or to not tell the truth, and [the responsibility of] how you present information to the public." She also spoke with Koenig about how to present a podcast. "She was a resource that I could ask about anything related to podcasting, basically the how-to," Spencer told The A.V. Club, citing the difference between being an actor onscreen and telling a story through a microphone. "It's a different beast. [Koenig] literally gave me the how-to 101."

Spencer told EW that she loved listening to Serial. "I remember thinking, wow, this is based on someone's life [and] realizing that I was so engrossed with the story itself, but that it actually happened to real people," the Oscar-winning actor said. "[It was great] to be a part of a story that not only challenges the viewers in that way, but also what journalism means, and how anyone basically with an interest in a particular subject can basically start a narrative and a podcast."

Truth Be Told isn't based on a real story or podcast, but through Poppy, the show will examine how the true crime genre can have real-world effects. Something someone like Koenig knows all too well.

More like this
Netflix Shut Down 'Bridgerton' S3 Rumours About A “Very Dark” Storyline
By Bustle
Everything To Know About The 'Daisy Jones & The Six' TV Series
By Maxine Harrison and Brad Witter
The Mysterious Gunther Corporation From 'Gunther’s Millions' Has Dissolved
By Brad Witter
Yes, Maurizio Mian's Cult In 'Gunther’s Millions' Was About Eugenics
By Gretchen Smail
Get Even More From Bustle — Sign Up For The Newsletter
From hair trends to relationship advice, our daily newsletter has everything you need to sound like a person who’s on TikTok, even if you aren’t.