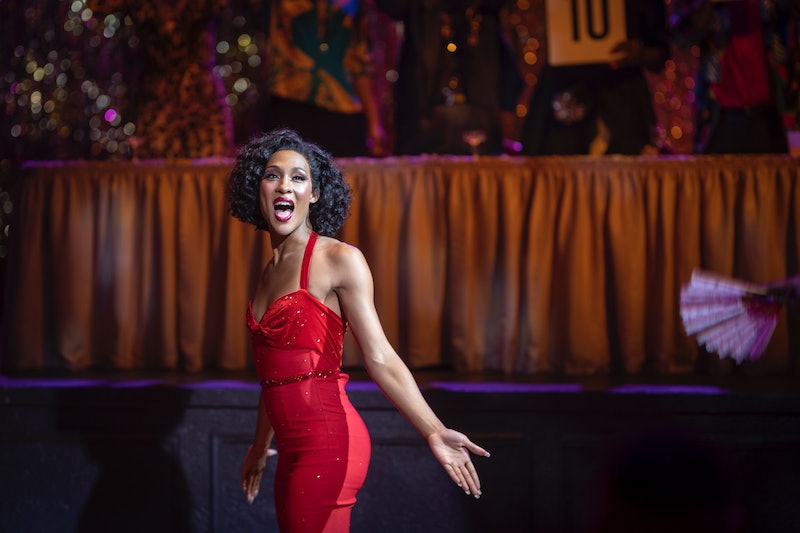 Spoilers for Pose Season 2 finale ahead. Pose’s Season 2 finale was a roller-coaster ride of heartbreaking moments and triumphant revelations that hint at a hopeful future for the House of Evangelista. Angel and Papi made a leap in the fashion industry and got engaged, Damon is a house father and traveling the world and there are two new possible children who need Blanca’s Midas touch to improve their lives. Blanca’s future on Pose still feels uncertain with her career essentially ending after it led to a scary decline in her health, but actress Mj Rodriguez tells Bustle that her character has come to a new realization about motherhood that will help Blanca hold on to her trademark optimism during this new chapter in her life.

“When she was heartbroken [after Damon, Angel, and Papi leaving], she was dealing with what every mother eventually deals with her babies flying out of the nest and venturing out to find places on their own,” says Rodriguez via telephone prior to the finale’s release. “And, I think in this episode, she realized that her babies will come back and seek her help when they need it. When it comes to the younger kids, she knows that these kids don’t have the guidance that they need. These are new kids that are brimming with hope and a slew of possible talents and she sees that. She looks in these kids’ faces and sees what Damon and Angel had to go through...she sees their faces in these other kids. That entices her to push harder and fight.”

Blanca’s continued fight for both her children’s welfare and the community overall progression was what led her to stand up out of her wheelchair and triumphantly lip-synch Whitney Houston’s iconic version of "The Star-Spangled Banner." The national anthem has been a subject of discussion in recent years due to professional athletes, notably Colin Kapernick and Megan Rapinoe, acknowledging how the song’s lyrics about freedom don’t align with the social injustices faced by marginalized communities.

However, Rodriguez believes that Blanca connects with the song for several reasons, including her right to freedom and Whitney’s general influence on her community at the time.

“I think Blanca chose that song to not only stand firm in who she is within a country that was completely against her at that time, but she also wanted her community to know that they have the right to be alive and be who they are no matter what,” affirms Rodriguez. “She wanted to try her best to be a shining example of that. She’s very vocal and transparent and did that to show that she’s strong and to also pay homage to Whitney.”

Her triumphant return to the ballroom was a hopeful ending to the season, but what will happen to Blanca next. Only the writers and producers know the answer but, like most fans, Rodriguez really wants to see Blanca in better physical health, especially with underage kids under her wing, and a loving relationship. It’s not clear what happened to the sexy lifeguard from last summer’s girls’ trip, but hopefully her short-lived romance with him was just a precursor of what’s to come in Season 3. Sure, there’s always Angel and Papi, but MJ firmly believes that the more positive depictions of trans women’s romantic relationships there are on TV, the better.

“Not a lot of trans women’s love lives are seen through their own eyes,” states Rodriguez. “They are always seen through the lenses of someone else. Women like myself need to see themselves in full, actualized relationships…It’s only right to see Blanca where she has two kids, three grown kids who are almost like they are in college and doing their own thing, and a steady life with a man who is treating her right.”

Blanca’s future on Pose will certainly have its ups and downs as she navigates a world that wants to erase her existence and stigmatizes her due to her HIV positive status. But, her life is also filled with hope as she continues to provide a loving home for those who are lost and discarded and stand up for right to love, life, and liberty. She may be going through a rough patch now, but there’s no hurdle to high to keep Mother down.