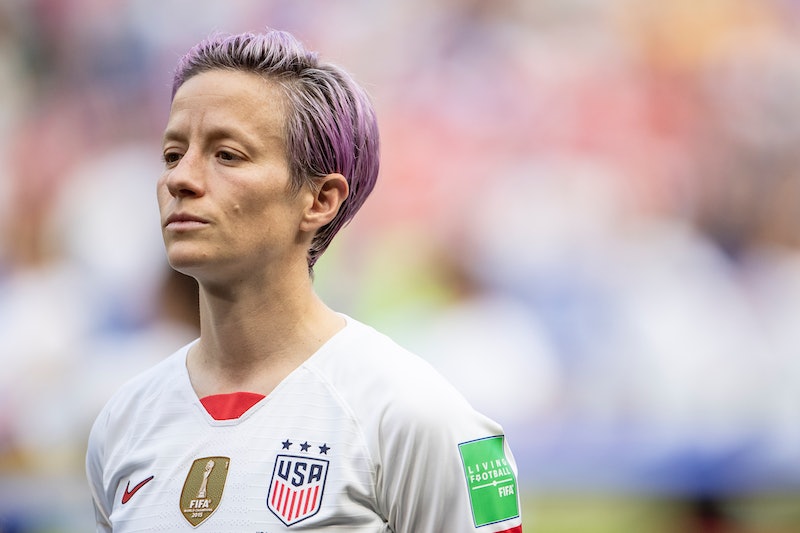 The professional soccer player who recently helped the U.S. National Women's Team win their fourth World Cup title isn't afraid to talk politics. In a recent profile with The New York Times, Megan Rapinoe explained why athletes should be political. Some might think politics should be separate from professional sports, but the 34-year-old athlete highly disagrees, especially as someone who is also a public figure.

After The Times asked Rapinoe, "Do you have any sympathy for the idea that sports should be a nonpolitical oasis?," she unapologetically answered,

"I don’t understand that argument at all. You want us to be role models for your kids. You want us to endorse your products. You parade us around. It’s like, we’re not just here to sit in the glass case for you to look at. That’s not how this is going to go. Yeah, I don’t [expletive] with that concept at all."

There are many other professional athletes who agree with Rapinoe. From former NFL star Colin Kaepernick to skier Lindsey Vonn to the NBA's LeBron James and Stephen Curry, now more than ever athletes are letting their political voices be heard. Like Rapinoe said, they aren't just athletes who "sit in the glass case," but they have their own beliefs and access to a public platform. For Rapinoe, now is the time more than ever to voice exactly how she feels, even if she's doing it in a non-verbal way. For example, she's previously protested the National Anthem by kneeling or keeping her arms by her side rather than putting her hand over her heart.

And every time she spreads her arms wide after a win or scoring a goal, that's partially Rapinoe's way of taking a stand against Donald Trump. "It was probably born out of a little arrogance. Like, are you not entertained? What more do you want?" she told The Times about her now famous pose. "And it was sort of saying to Trump — but more to detractors in general — that you will not steal our joy from us as a team, as the L.G.B.T.Q. community, as America. It was kind of a [expletive] you, but nice."

But, she's made plenty of verbal remarks in regards to politics too. In June, Eight by Eight magazine asked Rapinoe about visiting the White House if her team won the World Cup. Her answer? Rapinoe said that she wasn't "going to the f*cking White House."

Following her response, Trump partly tweeted, "I am a big fan of the American Team, and Women’s Soccer, but Megan should WIN first before she TALKS! Finish the job!" Rapinoe later apologized for how she phrased her Trump comments, but she didn't apologize to the president. "I stand by the comments that I made about not wanting to go to the White House, with exception of the expletive," Rapinoe said during a June press conference (via The Times). "My mom would be very upset about that."

When it comes to politics, Rapinoe said she's just all about unifying everyone, not just "everybody to the left." She explained to The Times,

"My big, I don’t know, 'message' right now is that every person has a responsibility to be a participant in this society and make it a better place for everybody, in whatever capacity they can. And I’m just trying to do the best that I can to inspire people to feel confident that they have the ability to be an active participant in this country, in their community, in their family. And having hard conversations is the only way we can start to move forward."

If you think Rapinoe should stop talking politics, the athlete has made it clear that she's not practicing silence anytime soon.