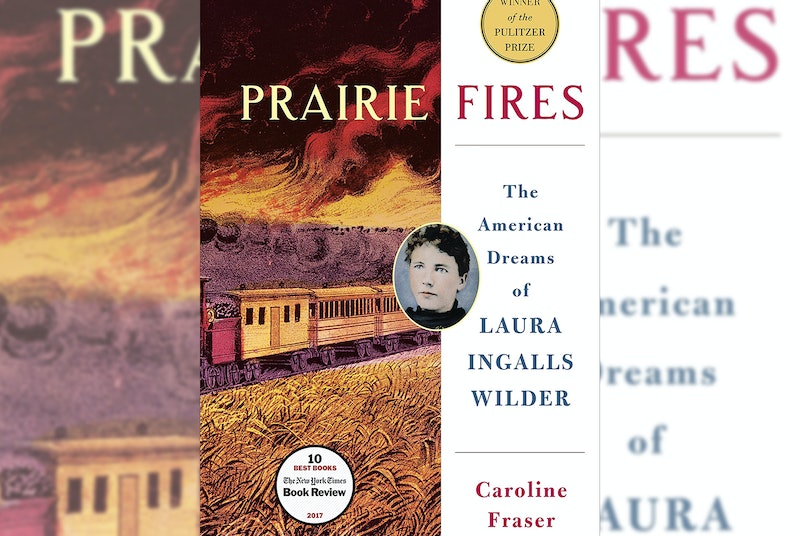 If asked to name the favorite book of my childhood, I can’t say that Laura Ingalls Wilder’s The Little House series would necessarily be the first that comes to mind. But they were undoubtedly the most ubiquitous books of my childhood — that gingham-patterned boxed set of nine children’s novels was a staple in the elementary school classrooms I grew up in, as well as on my own bookshelves at home. I read them, and read them again, usually skipping These Happy Golden Years and The First Four Years — the last books of the series, which told of Wilder’s teenage years and early married life, two things that I’m sure seemed moderately dull and impossibly far away to childhood self. My mother, who read the novels to me, discovered the novels in her own coming-of-age reading, and she never outgrew her fondness for Laura and Mary, Pa and Ma, and the little houses they inhabited throughout America’s flyover country in the years well before anyone was flying over anything.

Admittedly, this fondness has been checked in recent years. Wilder’s portrayals of both black and First Peoples are notoriously racist throughout The Little House books — not to mention frequently embellished or downright fictional, as readers of the recently-published Prairie Fires: The American Dreams of Laura Ingalls Wilder by Caroline Frasier, the first comprehensive historical biography of Wilder, will discover. And it’s no secret to readers that the pioneering spirit Wilder celebrates was the same spirit in which white Americans dislocated, enslaved, and killed First Peoples in colonizing the west. (Frasier addresses this as well, although Wilder's fictionalization of her own experiences is definitely the biography's focus.) The Association for Library Service to Children has even recently removed Wilder’s name from a children’s book award, in recognition of the racism her books contain.

In spite of this, Wilder’s novels are still those that have stood the test of time in my memory. I can still recall scenes from The Little House books with precision: Laura and Mary making molasses snow candy before the holidays, Pa playing the fiddle while a surveyor teaches them how to dance polka… the list goes on. They were novels that must have, at least in part, inspired my love of fiction and storytelling. And though I know now that Wilder’s novels have always been “autobiographical fiction,” when she wrote about sap harvesting and meat smoking, tree felling and fiddle playing, and the cozy confines of a prairie-bound covered wagon, I believed her. Which is why Frasier’s Pulitzer Prize-winning biography, Prairie Fires — a biography not just of Wilder, but of her daughter, Rose Wilder Lane as well — totally changed my relationship to the novels I’d read growing up.

...they were undoubtedly the most ubiquitous books of my childhood — that gingham-patterned boxed set of nine children’s novels was a staple in the elementary school classrooms I grew up in, as well as on my own bookshelves at home.

As the first comprehensive historical biography of Laura Ingalls Wilder, Prairie Fires takes a much deeper (and far less rose-colored) look at the charming, relatable anecdotes that Wilder filled her novels with. Drawing on unpublished manuscripts, letters, diaries, and land and financial records, Prairie Fires demonstrates the feat of fiction writing Wilder committed by turning her grueling, poverty-filled, and at times ethically questionable childhood into the stuff of American dreams.

“As children, we thought we knew her," Fraser writes, in Prairie Fires. “She was the real-life pioneer girl who survived wildfires, tornadoes, malaria, blizzards, and near-starvation on the Great Plains in the late 1800s.” She goes on to write that The Little House books were "a profound act of American myth-making and self-transformation.” And later: “Swamped in pious sentimentality, dimmed and blurred by the marketing of the myth, Wilder has become a caricature, a brand, a commodity.”

Prairie Fires looks at the Frontier Thesis, the argument that conquering of the frontier was critical to the formation of the character of America and its people. “Millions of people… came to hold it dear, treasuring the fantasy that a fistful of dollars and a plow could magically produce not only a farm, but a nation,” Fraser writes. “Since 1893, scholars have analyzed, deconstructed, and debunked the Frontier Thesis, nothing its sentimentality and biases.”

Certainly, in a less academic way, even my young self knew that this was true. If I grew too starry-eyed about the long-gone American prairie life, my mother would jokingly remind me that the Ingalls family bathroom was located outdoors.

"If I grew too starry-eyed about the long-gone American prairie life, my mother would jokingly remind me that the Ingalls family bathroom was located outdoors..."

As Prairie Fires demonstrates, Wilder didn’t just take her grueling and impoverished upbringing and find the quaint, cookstove-warmed, silver lining — she was a central figure in the creation of a myth that did, in fact, weave itself into the fabric of the United States’ identity. She did this while largely omitting the realities of the dislocation and genocide of America’s First Peoples, the corruption of America’s emerging railway and banking systems, and the events that primed the country for the Great Depression. Wilder also, whether she recognized this or not, ignored the environmental disaster of the industrial revolution. “Without knowing it, Charles Ingalls, Almanzo Wilder, and the other settlers who flooded into the Great Plains in the 1870s tore away those protective grasses and their roots, exposing bare soil to intense heat, evaporation, and drying winds,” Fraser writes.

She did this while largely omitting the realities of the dislocation and genocide of America’s First Peoples, the corruption of America’s emerging railway and banking systems, and the events that primed the country for the Great Depression.

But what’s so startling about Fraser’s biography isn’t how it reveals the myriad ways Wilder glossed over America’s complex history with westward expansion — a rhetorical choice hardly unique to her — but rather how she glossed over her own history, and that of her family, as well.

The intrepid, fiddle-playing Pa Ingalls that readers came to know and love was, in fact, a generally-penniless squatter who deforested land he didn’t own, staked claims that weren’t his to stake, and ran away from debts he couldn't pay. Wilder and her daughter spent much of their adult lives making money as “yellow” journalists: Lane wrote largely fictitious and unauthorized biographies of then-popular celebrities, and Wilder wrote farm journal articles that touted the benefits of a frontier life both mother and daughter knew was a pipe dream, one that had led to insurmountable financial debt and, at times, risk of imminent starvation in their own lives. There is no mention of the wages a nine-year-old Laura was forced to earn to keep her family financially afloat. The American Dream that The Little House books tout is one the Ingallses, nor the Wilders, ever truly realized.

“The life experience she drew on — the model provided by her parents — was complex, comprised of equal parts recklessness and passivity,” reads Prairie Fires. “While the family had weathered disaster after disaster, their lives never attained true security. Rarely was there foresight or planning. Their lives were balanced on edge, constantly uprooted and often imperiled. At many junctures, catastrophe was barely averted, and the children were often made aware of their poverty.”

The American Dream that The Little House books tout is one the Ingallses, nor the Wilders, ever truly realized.

Certainly, The Little House novels were written for children. But even as an adult reader, it’s easy to believe Wilder and her family existed outside of time. Whether it was Wilder’s writing itself, or the fact that her characters lived in such remote expanses of prairie they really appeared a single, isolated universe, The Little House books read like a world all their own, free of historical context. “Glimpses of historical events can be seen in offhand references in Wilder’s memoir, like blurry figures in the background of a photograph,” Fraser writes. “A passage describing the family’s first autumn back in Wisconsin, for instance, recounts how ‘one day the sun was nearly hidden by smoke all day and when dark came the sky was reddened by fire,’" — an unknown reference to the fires that raged across Wisconsin and Illinois on the night of the Great Chicago Fire. In another example, for all Wilder's writing, the Civil War might as well not have taken place, though many a frontiersman fled westward rather than fight.

Perhaps in our digitized, social media-crazy, truth-attacking age, it’s difficult to imagine a time when facts — and fictions — weren’t easily proliferated worldwide at the click of a button and to consider the possibility that Wilder’s omissions weren’t always deliberate ones. Long seen as a testament to the American spirit of grit, resilience, perseverance, and self-reliance, I now see The Little House books as something emblematic of another characteristic inherent to the American identity as well: That of a people constantly rewriting their own history, at any cost.