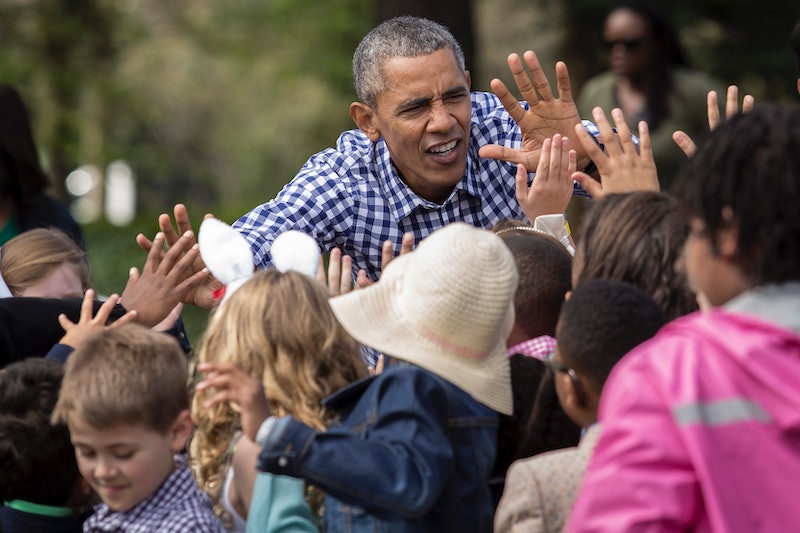 Once Lauren Kelly, the deputy social secretary for Barack and Michelle Obama, met then-Sen. Obama in Iowa back in 2007, she knew she wanted to join his team. "I was just inspired with their story and who they are and their message of bringing the country together," Kelly tells Bustle of watching the Obamas on the campaign trail. And after watching them throughout the past eight years, Kelly reveals Obama's cutest behind-the-scenes moment that she witnessed in the White House.

"It’s always funny when kids go in for hugs or scream when they see the president or first lady. I remember once the president was doing a group photo with a bunch of little kids, and they just really went in for a group hug after," Kelly says. "He loved it. It was this adorable moment, and I will never forget 20 little kids... he was sitting down, and they just kind of tackled him a little bit."

Kelly has seen the president on countless occasions and with countless people, but this group-photo-turned-group-hug is one moment she says she'll never forget. And that candid encounter reflects the Obama mantra Kelly tells me has stuck with her throughout the years. "Something I heard the president say once that I loved was: 'Be kind and be useful.'"

Although Kelly primarily works in the first lady's office, she helps with the president's events too, "so we really get to see a lot of interesting things," she says. Of all the events she's helped planned, Kelly says one of her favorites involved the Pope. At the beginning of her time as the deputy social secretary, Kelly was tasked with hosting the Pope at the White House for one day. "It was wonderful to be a part of making that day go smoothly and making that a memorable day for the president and first lady," Kelly tells Bustle. "I will never forget that day."

"My first briefing with the president was a little intimidating, to say the least."

Before these events take place, the Social Office staffer in charge of that event is supposed to brief the president or first lady. Pictured above in the red dress, Kelly briefed them ahead of the 2013 Presidential Medal of Freedom ceremony. However, she tells me that at her first event — the National Teacher of the Year award, which honors exceptional teachers from every state — she expected someone else to take the reins. Instead, she hit the ground running and immediately started working with the Obamas directly.

"My first briefing with the President was a little intimidating, to say the least, but after a while, you realize that it is your job to inform them about the event, and you focus more on making sure they have all of the information they need," she says.

Since they met in 2007, Kelly says she's always wanted "to have any piece of supporting these really awesome people," and she's done exactly that. Among the several hundred events she's helped plan and execute for the president and first lady, she says watching 20 little kids tackle Obama to the ground in a group hug will be one of her most fond memories of working behind the scenes in the White House.

Images: This official White House photograph is being made available only for publication by Bustle. The photograph may not be manipulated in any way and may not be used in commercial or political materials, advertisements, emails, products, promotions that in any way suggests approval or endorsement of the president, the first family, or the White House.