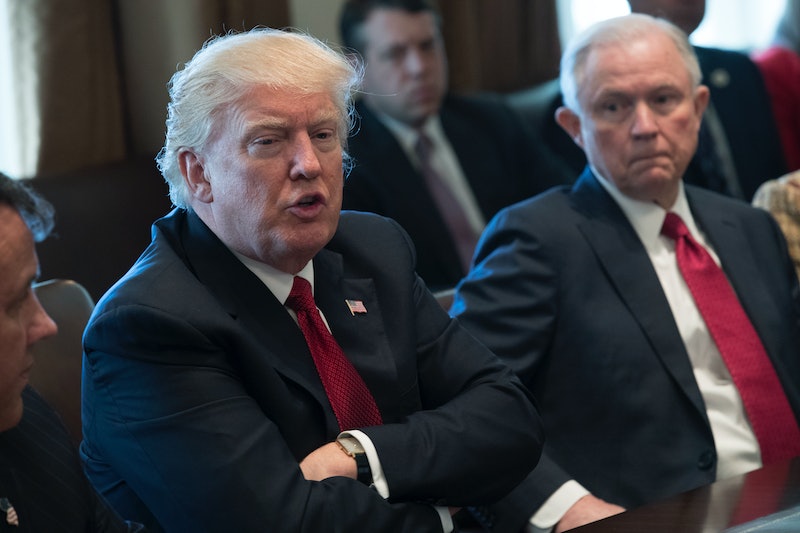 This year has been full of concerns that President Donald Trump's friends and allies are dropping like flies. Unfortunately, the latest high-profile White House beef does nothing to quell those rumors, as Attorney General Jeff Sessions and Trump are allegedly feuding now. In fact, Sessions has supposedly even offered to step down from his position, though White House Press Secretary Sean Spicer has denied ever having that conversation with the attorney general. Bustle has reached out to the White House for comment.

As any reality-TV scholar knows, the juiciest feuds dissolve from what seem like solid friendships. Early aboard the Trump bandwagon and the first sitting senator to endorse him during his campaign, Sessions seemed to be someone Trump trusted. Back in February 2016, the Alabama Senator couldn't say enough nice things about Trump, telling crowds at an appearance in Huntsville that the then-candidate was leading a "movement":

I told Donald Trump, this isn’t a campaign, this a movement. I believe that the movement is afoot — that must not fade away. It has the potential to have the American people’s voices heard for a change.

As for Trump, it was common knowledge that he held Sessions in high esteem— enough to appoint him to the position of Attorney General. However, the honeymoon period of these two bros attending rallies, meeting with foreign diplomats, and vowing to defend executive orders in the Supreme Court didn't last.

Suspicions kicked-off earlier in June, when Trump subtweeted Sessions about his frustrations over his travel ban. (Does it still count as a subtweet when he @'d the State Department? Let me know.)

“The Justice Dept. should have stayed with the original Travel Ban, not the watered down, politically correct version they submitted to S.C. [the Supreme Court]," he said in a blustery series of 6:30 a.m. EST tweets.

This palpable frustration was a far cry from the days where it was reported that Trump was angry that people weren't defending Sessions enough prior to him recusing himself from Russian investigations in March.

As The New York Times reported, Trump later began to blame Sessions' recusal for the deepening of the Russia inquiries that culminated in the appointment of special counsel Robert Mueller. But the drama of it all doesn't end there.

As the New York Times' Peter Baker noted on Twitter, on Wednesday Trump declined to answer questions from reporters about whether he still had confidence in his Attorney General pick. (Because sometimes silence is the only answer you need.)

While Sessions' offer to resign hasn't led to any line-up changing moves or devastatingly brief dismissal letters, the alleged tension between Trump and his former-ride or die doesn't seem likely to just blow over.