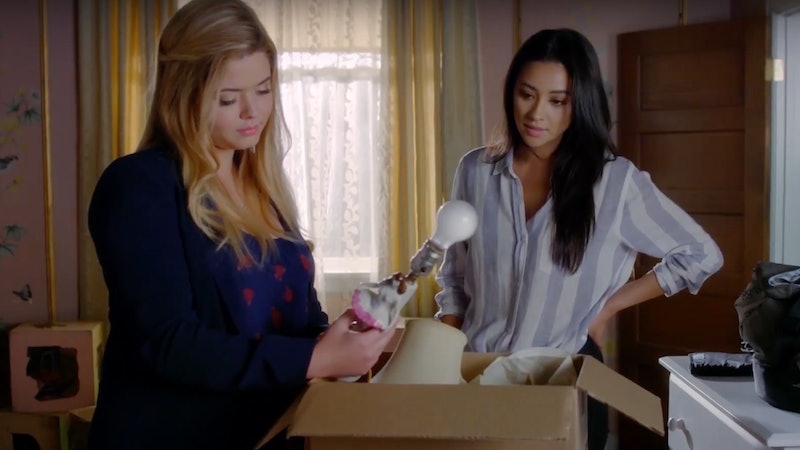 Despite their many relationship troubles, Pretty Little Liars' Emily and Alison are back together. Showrunner I. Marlene King tweeted the update on June 30 after a fan asked how the couple was doing on their wedding anniversary. Per King's tweet, it certainly sounds like the fan-favorite couple is better than ever.

"Emison is going strong," King tweeted, definitively. "They are reunited and loving each other hard." She also gave an update on the couple's twin girls, adding, "Plus they are great moms, raising their daughters to be strong women who are true to themselves and their identities."

This is a major update, especially considering that the last fans heard, in the PLL spinoff, Pretty Little Liars: The Perfectionists, Alison and Emily had gotten divorced. The shocking news followed their relatively happy ending on PLL, where they were very much in love and raising their twin daughters together. (You remember how A.D. stole Emily's eggs and impregnated Alison without either of their consent or knowledge, right?)

During a June Perfectionists reunion, Sasha Pieterse opened up about her character Ali divorcing Emily (played by Shay Mitchell). According to TVLine, Pieterse called Ali signing the divorce papers a major "turing point" for her character. That said, she did say that the unexpected — and unwelcome — divorce remained "a soft spot for all of us."

It doesn't appear that Mitchell ever commented on Emison's divorce, but she told Entertainment Tonight in January of 2017 about Emily possibly ending up with Ali in the final season of PLL, "This is the most romantic season thus far and all I can say is that Emily will end up with someone who she cares deeply about."

In the PLL series finale, Ali and Emily got engaged, but fans never saw their actual wedding. The divorce definitely came as a surprise for loyal fans, but it's good to know that the Emison is living a happy life after all those years of being tortured in Rosewood.

More like this
Everything To Know About 'Only Murders In The Building' Season 3
By Gretchen Smail and Kadin Burnett
'Bridgerton's Regé-Jean Page Is The World’s Most Handsome Man
By Darshita Goyal
Rupert Grint Just Shared A *Major* Update About Ron Weasley’s Future
By El Hunt
'RHOSLC' Star Jen Shah Refuses To Do A Post-Sentencing Interview With Andy Cohen
By Brad Witter and Jake Viswanath
Get Even More From Bustle — Sign Up For The Newsletter
From hair trends to relationship advice, our daily newsletter has everything you need to sound like a person who’s on TikTok, even if you aren’t.