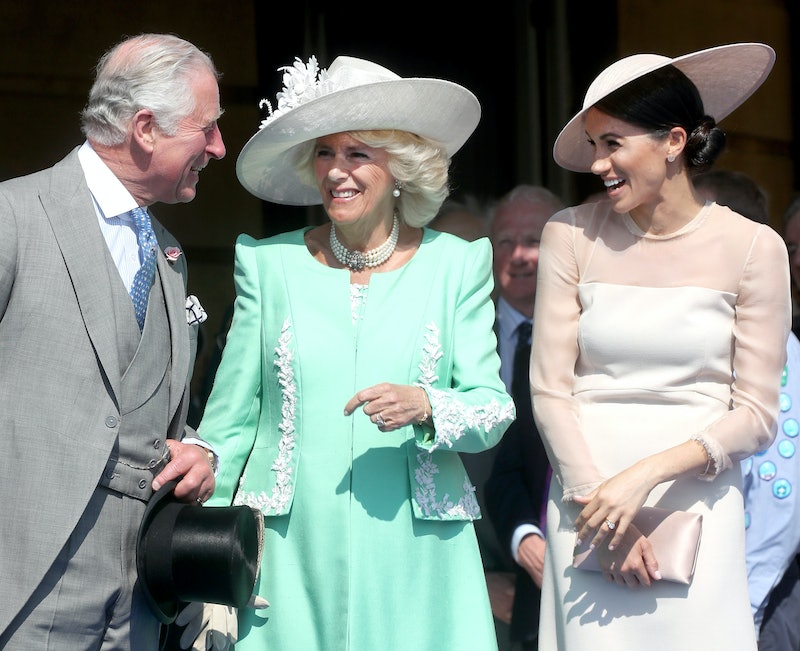 In any family a good relationship with your in laws is ideal. But when that family is royal, the pressure is really on. But a certain new Duchess seems to be taking it all in her stride and getting on with the most important members of the Royal Family like a house on fire. Especially her father-in-law — in fact Prince Charles and Meghan Markle's relationship and chemistry is so strong that it may be reshaping the entire bonds of the royal family.

Recent reports highlighted that he's reportedly nicknamed her Tungsten after her "tough and unbending" nature. But it's not just the nickname, Prince Charles and the Duchess of Sussex couldn't be on better terms according to body language experts. The Royal Family's latest outing to Ascot and Meghan's first day at the races gave onlookers plenty of hints and clues to analyse. Carole Railton, author of The Future of Body Language, tells Bustle that Prince Charles and Meghan's friendly chat shows how the newest royal is gaining confidence. "Meghan has become more controlled in her attire and behaviour since her engagement. Her recent interaction with Charles at Ascot shows how her confidence in her royal role has grown," she says.

And according to Railton, the pair's relationship may even border on flirty, though I'm sure it's purely platonic. She explains:

"Recent pictures show Charles leaning in towards Meghan, quite close and exactly opposite her. Meghan has responded with her head slightly tilted to one side showing interest in what he is saying and sometimes a smile that could even be contrived as flirting."

Despite what Meghan's latest moniker might suggest, it seems that it's Meghan's lighthearted approach rather than her serious side that's impressing Prince Charles. Apparently it's encouraging him to show a more fun side to his personality, which was on full display during the Queen's Trooping of the colour ceremony. "Charles seems to be fascinated by Meghan, even nipping back to chat with her and Harry on the palace balcony," says body language expert Judi James. "And the way his face is wreathed in smiles as they talk suggests he finds her company both interesting and fun.

"The responsibilities of married life might have brought out a more serious, caring side to her own prince but with his dad Meghan seems to have unearthed a more fun side that has been hidden over the years," adds James.

As we've seen, Meghan is an absolute pro when it comes to putting people at ease. She makes the Queen beam from ear to ear, she was a true pal to Countess Sophie of Wessex when she had a bit of bug drama at the races, and she and the Duchess of Cambridge seem to be firm friends. Not that anyone should be surprised that Markle is charming the royals' socks off - she's worked her way up in the tough world of acting, she's committed to worthwhile humanitarian causes, and is by all accounts an amazing human being. They're lucky to have her and it seems like they're well aware of it.

And Prince Charles is no different, as just like she does with the rest of the Royal Family, Meghan appears to be making a real effort to show her interest in her new father in law.

Railton tells me: "They are very comfortable in each others company chatting and smiling as in a close relationship. Its never easy to be directly in front of someone unless you are really comfortable in yourself."

And it's not just Meghan who is feeling more at home in her new family, Charles appears much more comfortable as a father-in-law to his youngest son's new wife. "Charles too seems to have relaxed into his role," says Railton. "Firstly, he took the arm of Meghan’s mother at the royal wedding and now can be seen supporting and interacting with Meghan in a way that is far more natural than we expect from the royals." The pair also cemented their bond when Prince Charles famously stepped into walk the now Duchess of Sussex down the aisle at her wedding to Prince Harry.

James explains that their close relationship and sense of ease around each other might be thanks to a shared sense of humour: "The way Charles is often seen beaming and pointing a finger as he chats with Meghan suggests he's the one in raconteur mode, telling jokes that clearly make Meghan smile."

Rumour has it that Meghan has tried to bring Prince Harry closer to his dad and Camilla and according to James, there's plenty of evidence in Meghan and Charles' rapport to back up the speculation. "Meghan seems to have been set on growing the closeness between Harry and his father and Camilla, and the current bouts of relaxed smiling from both Charles and his mother the Queen suggests she might be succeeding," she comments.

So it seems like Meghan Markle has this Duchess thing all wrapped up. Not only is she handling official events with senior members of the Royal Family like an absolute pro, but she might even be helping the Royals become a better family. I've gotta say, I'm impressed.