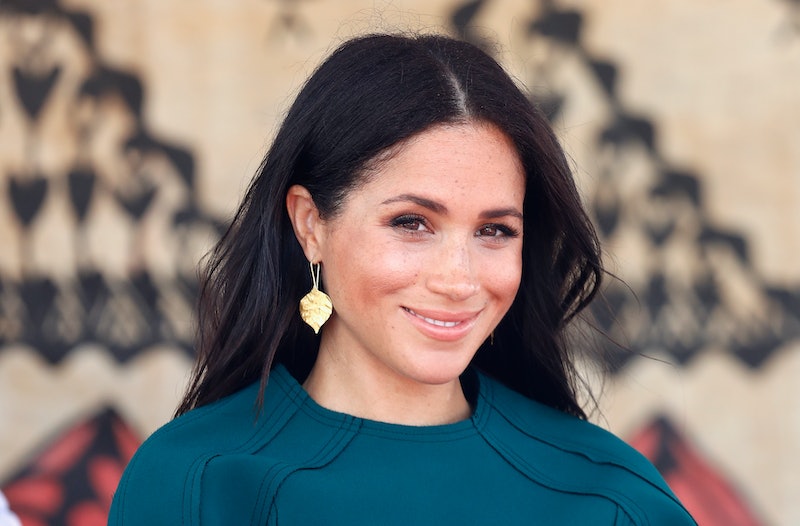 Meghan Markle has become a total fashion icon during her time as an actress and as part of the UK royal family. From her gorgeous structured evening gowns to her pared-down daywear and, of course, that wedding dress — it's clear that style comes naturally to her. So a particular headline, which suggested that Prince Charles gave Meghan Markle some fashion advice during her Australasia trip last year, certainly caught my eye.

Yep, apparently Meghan's father in law thought it was necessary to step in to share his words of style wisdom when the Duchess was on her royal tour. According to the Daily Mail, the Prince advised Markle against wearing a tiara during a dinner in Fiji, hosted by the president of Fiji Jioji Konrote. The reason? He reportedly said it would be too "extravagant," and that wearing tiaras was outdated and reflective of a bygone era in certain areas of the Commonwealth such as Fiji.

"Meghan did not understand all of this because she was new to the role and so Prince Charles told her that it would not be appropriate," a source explained to the Mail. "It was very kindly done," they added.

Another source apparently told the Mail: "The Prince, having travelled to all these places many times over many years, is very well placed to give advice on such matters."

I have reached out to Prince Charles' representatives at Buckingham Palace to discover how true these rumours actually are, but they have declined to comment.

During the event in question in Fiji, Markle wore a stunning blue dress by Safiyaa. Despite reportedly being advised not to wear a tiara, she still looked vibrant, and accessorised with a pair of oversized silver diamond earrings. These were thought to be borrowed from the royal collection, the Daily Mail writes.

While the Duchess of Sussex did not sport a tiara that night, across the world at Buckingham Palace, The Duchess of Cambridge wore a large diamond and pearl headpiece on the same night at a state banquet.

Meghan did, however, wear a tiara on her wedding day as part of her bridal ensemble. According to Harper Bazaar, the beautiful diamond and platinum bandeau tiara, which was owned by Queen Mary, was borrowed from the Queen's private collection. She wore this alongside her beautiful minimalist wedding dress, which was designed by Givenchy's Clare Waight Keller.

Prince Charles' reported advice about the tiara to the Duchess of Sussex could be viewed as caring piece of advice to the newbie royal. The pair certainly seem to have an amicable, close relationship, and have done since Prince Charles walked Markle down the aisle at her and Prince Harry's wedding.

The two have also been photographed often sharing a joke or two, and looking at ease in each other's company. The Duchess appeared to exchange friendly remarks with Charles at his 70th birthday party, for example, which was Markle's first appearance after her marriage to Prince Harry and as a fully fledged member of the royals.