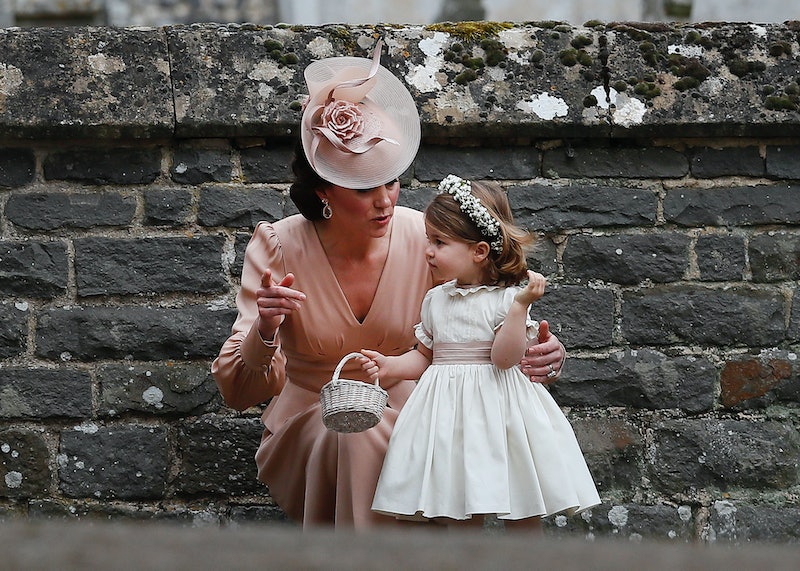 Well, it's now finally official: Pippa Middleton is married. The socialite and younger sister of Kate Middleton married her fiancé James Matthews on Saturday, May 20 at St. Mark's Church in Englefield. While all the attention was on the bride, who wore a stunning white lace gown designed by British designer Giles Deacon, the true stars of the wedding had to be royal siblings Prince George and Princess Charlotte.

Pippa Middleton's royal niece and nephew joined the highly anticipated wedding as members of the bridal party. Prince George served as a pageboy, which is essentially a ring bearer who walks down the aisle before the bride, while Princess Charlotte was a bridesmaid. According to a report from The Telegraph, Charlotte was supposed to walk down the aisle alongside her aunt. You're probably thinking that it's a little risky to make two toddlers play such important roles in an even more important event, but it's actually very common in British culture for children to participate in weddings. After all, just take a look at the bridesmaids and pageboys in her big sister Kate's wedding.

Two-year-old Princess Charlotte wore an all-white dress with a frilled collar, all secured by a light pink bow. She also donned an adorable flower crown and beige leather shoes. The 3-year-old pageboy wore a white, collared shirt with olive green slacks and white, knee-high socks. Both of their ensembles were designed by Pepa & Co.

While I'm not sure just how adorable the two siblings looked while the intimate ceremony was taking place, I do know that they managed to steal the show outside of the big event without even really doing much.

At one point Charlotte was photographed having a super cute moment with the Duchess of Cambridge, while both siblings were later pictured inside the church standing next to one another holding a heart made out of flowers. Excuse me as I try and stop myself from bawling.

Congrats to the happy couple! It's so sweet that her niece and nephew were part of the big day.