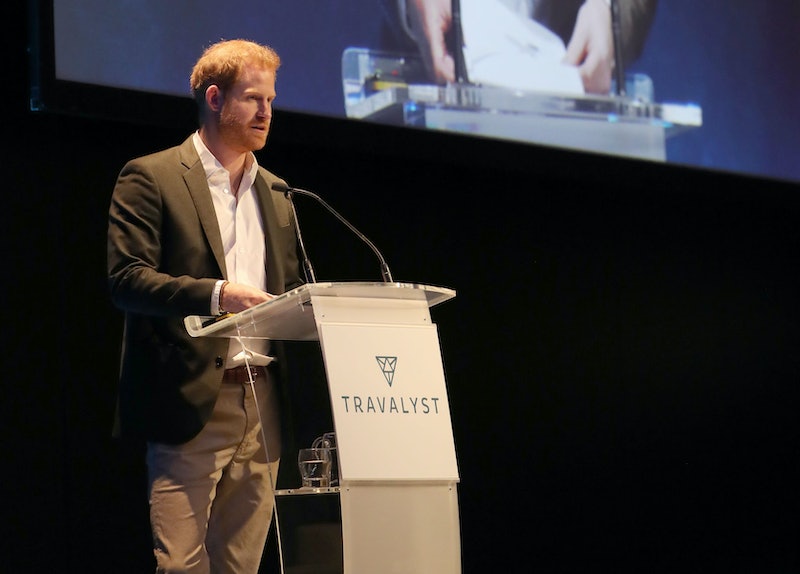 Since Harry and Meghan decided to step back from royal duties, the question has been — what does their future hold? Harry arrived back in the UK yesterday (Feb. 25) for his final round of royal engagements, and today spoke at a summit in Edinburgh about his new travel initiative, Travalyst, which he formed in collaboration with Booking.com, Skyscanner, Trip.com, TripAdvisor, and Visa.

The initiative, which is fronted by Harry, aims to reduce the tide of environmental damage caused by tourism across the globe.

As Hello reports, before the royal arrived onstage to deliver his speech, host Ayesha Hazarika said to the audience: "He's made it clear that we are all just to call him Harry. So ladies and gentlemen, please give a big, warm, Scottish welcome to Harry."

The speech included comments about the remarkable economical implications of the travel industry. "Tourism is one of the world’s largest economic sectors – generating nearly $9 trillion globally each year," Harry said. He explained that the prediction is, by 2030, tourism will grow to over 1.8 billion travelers, meaning the time to act to save the environment is now, before it's too late.

The reasons behind Harry's partnership with Travalyst was further detailed in a post shared on his and Meghan's Instagram account. The post, which shows some of Scotland's most famous tourist locations and events, reads: "Travalyst is working to ensure the industry can better support communities that face increasing challenges of overcrowding, pollution, and the climate emergency."

Interest in environmental projects has long been a family affair for the Windsors and is an ideal move for Harry in this new chapter of his life.

Harry's father, HRH Charles, Prince of Wales, has been vocal in his concerns regarding the environment and climate change over the last four decades. According to his website, he is the patron for several environmentally friendly projects and is passionate about a sustainable and earth-friendly future.

Harry's brother, HRH Prince William, Duke of Cambridge, has also spoken about in his concerns for the planet's future. In 2019 he unveiled the Earthshot prize which the Guardian reports is "the most prestigious environment prize in history" and aims to encourage the development of new solutions to protect our planet from climate change.

After all the media speculation regarding Harry and Meghan's post-royal life endeavors, projects like seem to give us some indication of where they're headed.