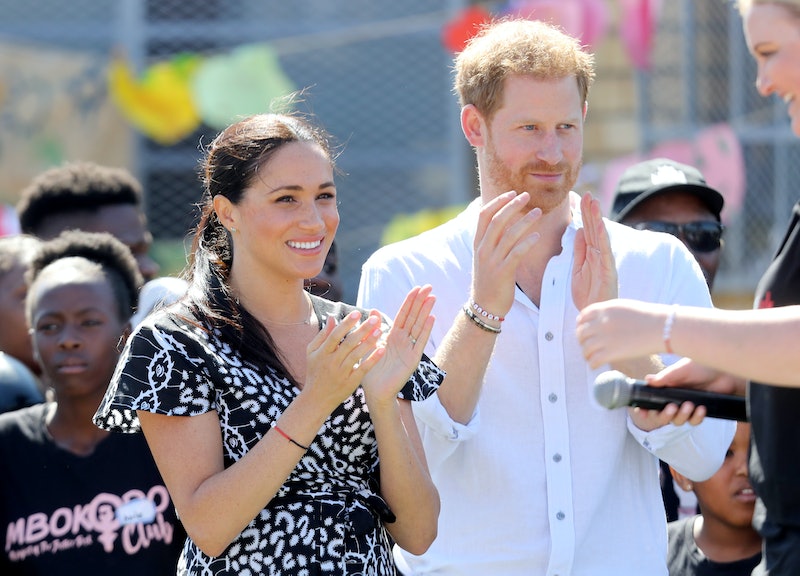 Following his statement denouncing several British newspapers for the "false and malicious" media harassment against Meghan, Duchess of Sussex, it was revealed that Prince Harry, Duke of Sussex, has launched a lawsuit over alleged phone hacking against the publishers of The Daily Mirror and The Sun. Buckingham Palace has confirmed the filings on behalf of Harry, according to the BBC, regarding the alleged illegal interception of voicemail messages. Bustle has reached out to the Duke and Duchess of Sussex's press office as well as The Sun and The Daily Mirror for comment, but did not hear back.

According to ITV royals reporter Chris Ship, Prince Harry filed legal proceedings at the High Court in late September against the owner of two of the biggest tabloids in the UK. As reported by The Guardian, Harry and Meghan have four months after the initial filing to decide whether or not to proceed with a lawsuit.

News of Harry's filings come soon after he and Meghan filed a suit against the The Mail on Sunday, and another suit against its parent company Associated Newspapers on Oct. 1, for an alleged invasion of privacy. In a statement published on the official Sussex website, Harry claimed that Meghan has endured a "ruthless campaign that has escalated over the past year, throughout her pregnancy and while raising our newborn son."

The couple publicly stated that they've had enough of the alleged harassment, alleged "misuse of private information," and alleged "infringement of copyright and breach of the Data Protection Act 018," as per Harry's statement. "There is a human cost to this relentless propaganda," he continued, "specifically when it is knowingly false and malicious, and though we have continued to put on a brave face — as so many of you can relate to — I cannot begin to describe how painful it has been."

In that filing, Harry and Meghan specifically referenced The Mail on Sunday's alleged “intrusive and unlawful publication" of a private letter claimed to be written by Meghan to her estranged father, Thomas Markle, published in February. In his statement about the lawsuit, Harry claimed that The Mail on Sunday "purposely misled" readers with the letter "by strategically omitting select paragraphs, specific sentences, and even singular words to mask the lies” the media allegedly "had perpetuated for over a year."

Harry also compared his wife's treatment in the British press to that of his mother, the late Diana, Princess of Wales, who died in a car crash in August 1997 while being pursued by paparazzi. "I’ve seen what happens when someone I love is commoditised to the point that they are no longer treated or seen as a real person. I lost my mother and now I watch my wife falling victim to the same powerful forces," he wrote, adding that his "deepest fear is history repeating itself."

The lawsuits are not the first time that Harry has released a statement admonishing the British press for their treatment of Meghan. In November 2016, Harry issued a statement through Kensington Palace calling out the "abuse and harassment" endured by his then-girlfriend rooted in "racial undertones" due to Meghan's mixed-race background.

According to The Guardian, Harry also complained to the BBC in December 2018 after it broadcast an image from a neo-Nazi site that called him a "race traitor." While the news organization rejected the formal complaint, the BBC did take the image down and later apologized for not warning Harry and Meghan about it ahead of publication. While it remains to be seen whether or not the royal couple will go through with their lawsuit against The Daily Mirror and The Sun, it does underline the Royal Family's commitment to protecting Meghan from perceived harassment from the British press.