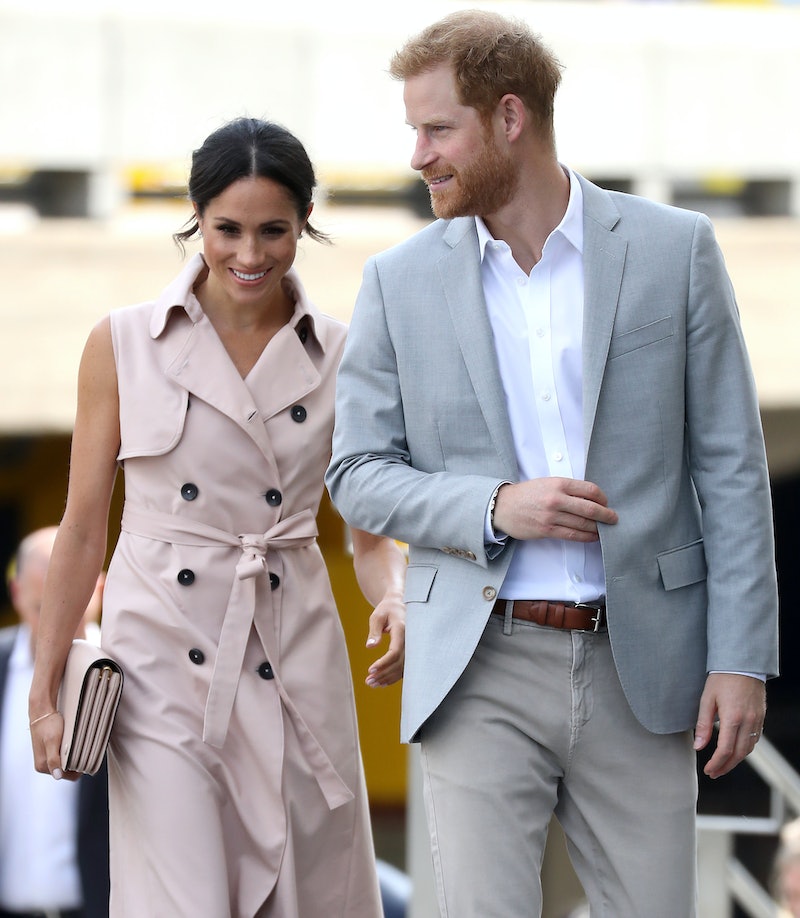 Prince Harry and Meghan Markle might be upgrading their digs soon. The Daily Mail reported Friday that the Queen may have given Prince Harry and Meghan Markle a new house, and it sounds so luxurious. The property in question is Adelaide Cottage, but don't let the word "cottage" fool you. This isn't a quaint "cottage" in the countryside — based on the photos, it looks like a royal mansion.

As the Daily Mail reported, the cottage was built in 1831 for William IV's wife, Queen Adelaide, hence the building's name. The outlet doesn't state how many rooms the cottage has, but it looks pretty spacious in the photos. The outlet also reported that the cottage's master bedroom has "a coved ceiling with gilded dolphins," and the house also has "a marble Graeco-Egyptian fireplace." It sounds like Adelaide Cottage is definitely fit for royalty.

Before their May 19 wedding, the Duke and Duchess of Sussex lived in Nottingham Cottage, a two-bedroom home on the Kensington Palace estate. That cottage holds a special meaning for the two of them, too — Prince Harry reportedly proposed to Markle at Nottingham Cottage.

After the wedding, the two of them moved to "Apartment 1," a 21-room house at Kensington Palace, according to The Express. Apartment 1 is also next to Apartment 1A, the 22-room home where Prince William, Duke of Cambridge, and Catherine, Duchess of Cambridge, live with their children.

If the report is true, this wouldn't be the first property the Queen has given Prince Harry and Markle. She also reportedly gave them York Cottage, a house on Norfolk's Sandringham Estate. (There are rumors that York Cottage is haunted, but it seems like the newlyweds haven't run into any paranormal activity so far.) The Queen often spends the winter months at Sandringham, so the couple would be able to stay close to her at the property.

If Prince Harry and Markle do move to Adelaide Cottage, they'll be moving from the Kensington Palace estate to the Windsor Castle grounds. The two of them were married at St. George's Chapel, which is at Windsor Castle, so the house would have a sweet connection to their wedding day, too.

As for where the rest of the royal family lives, they're scattered around the royal residences. The Queen and Prince Philip, Duke of Edinburgh, live at Buckingham Palace during the week, and they often spend time at Windsor Castle, as well as in Scotland and at Sandringham. Prince Charles, Prince Of Wales, and Camilla, Duchess of Cornwall, live at Clarence House. Prince William and Middleton live at Kensington Palace, as Prince Harry and Markle do, at least for now. Other royal family members, including Princess Eugenie of York and her fiancé, Jack Brooksbank, also live on the Kensington Palace grounds.

If the Queen does give Adelaide Cottage to the newlyweds, it will be far from her first wedding present for the happy couple. In addition to the rumored York Cottage gift, the Queen is also the one who bestowed Prince Harry and Meghan Markle with their titles as the Duke and Duchess of Sussex. Markle was also given a coat of arms after the royal wedding.

It looks like the couple has no shortage of options for places to spend their time in England. And the reports are a clue that whatever rumors might be going around about potential tension, the Queen seems to be on good terms with her grandson and his wife. Kensington Palace hasn't confirmed whether the Duke and Duchess will move into Adelaide Cottage, but it sounds like they have plenty of awesome residences to choose from.