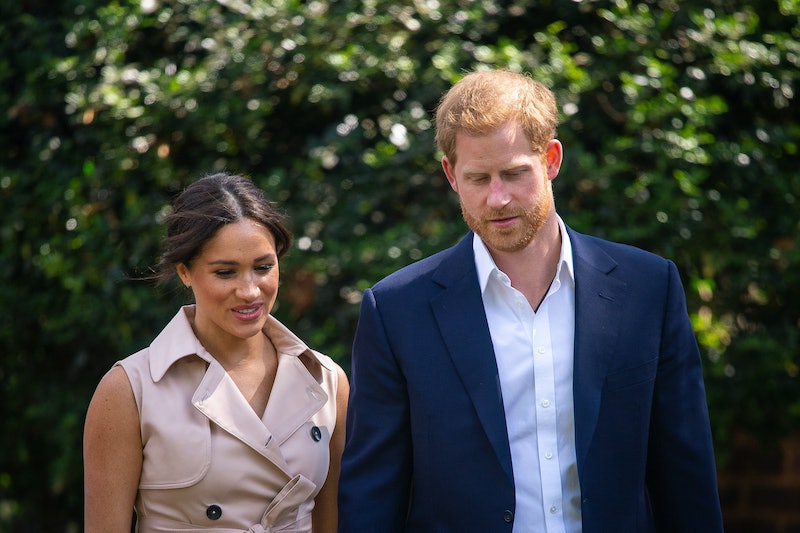 Prince Harry, Duke of Sussex, and Meghan, Duchess of Sussex's family time off has officially begun — and that means the royal couple will be missing a visit from President Trump. On Monday, Buckingham Palace confirmed that Harry and Meghan won't attend a reception for Trump while he's in London for a two-day NATO meeting. Queen Elizabeth is hosting a drinks reception for the president on Tuesday, as reported by People. Although, Harry and Meghan will miss the event due to being on a break from their royal duties, other royals will be in attendance, including Kate, Duchess of Cambridge, Prince Charles, and Camilla, Duchess of Cornwall. Prince William, Duke of Cambridge won't attend with Kate due to his four-day solo tour of Kuwait and Oman.

In October, a royal source confirmed to multiple outlets that Harry and Meghan would be taking time off to spend privately with each other and baby Archie. "The duke and duchess have a full schedule of engagements and commitments until mid-November, after which they will be taking some much-needed family time," the source said. In addition to missing Trump's reception, People reported that the couple will also skip the royal family's Christmas in Sandringham this year, in favor of spending the holidays with Meghan's mother, Doria Ragland.

While Harry and Meghan's time out of the spotlight has been planned for months, this isn't the first time Meghan has missed a visit from Trump. In June, the president visited the U.K. and attended a state banquet with the Queen, Prince Charles, Camilla, Kate, and William at Buckingham Palace. Harry later joined his family, as well as Trump, at a palace exhibit at Buckingham Palace. At the time, Meghan was still on maternity leave after having Archie in May.

Shortly before Trump's June visit to the U.K., The Sun published an interview with the president where he was asked what he thought about Meghan's 2016 interview with Larry Wilmore, during which she called him "misogynistic and divisive." Trump told The Sun that he "didn't know that she was nasty," but he later claimed on Twitter that he never made the comment about Meghan — despite the interview being recorded.

In the same interview, he also praised Meghan saying that she would be a "very good" American princess. "It is nice, and I am sure she will do excellently," he said. "She will be very good. I hope she does (succeed)." Meanwhile, Meghan hasn't officially spoken about Trump since she married Harry, but she made it clear in her 2016 interview that she wasn't a fan of his politics.

"Trump has made it easy to see that you don't really want that kind of world that he's painting," Meghan said at the time.

More like this
Prince Harry Incorrectly Recites Christina Aguilera’s “Genie In A Bottle” Lyrics
By Jake Viswanath
Here’s Why Tyler Perry Helped Prince Harry & Meghan Markle When They Moved
By Marina Watts
James Cameron May Come To Regret His 'Titanic' Door Experiment
By Stephanie Topacio Long
The 2023 Super Bowl Commercials Feature A 'Breaking Bad' Reunion & Missy Elliott
By Alyssa Lapid
Get Even More From Bustle — Sign Up For The Newsletter
From hair trends to relationship advice, our daily newsletter has everything you need to sound like a person who’s on TikTok, even if you aren’t.