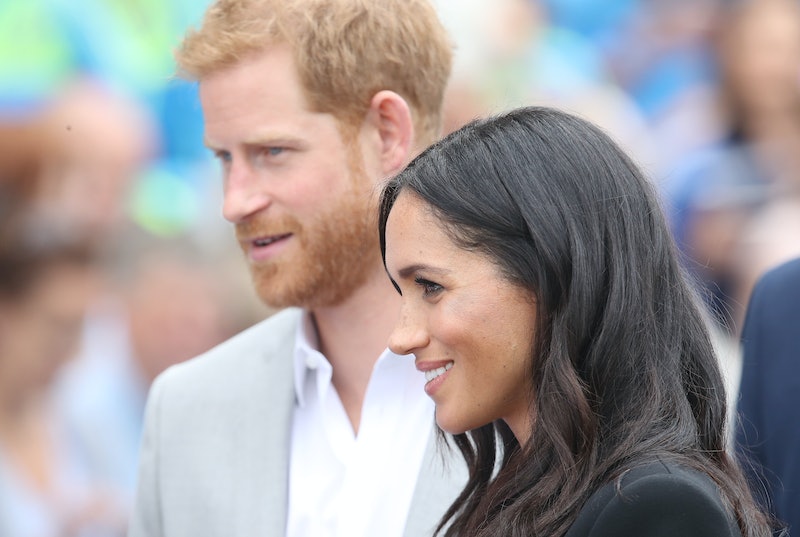 Prince Harry and Meghan Markle are unsurprisingly still captivating the nation, and their recent two day trip to Ireland got me feeling kinda jealous. No, it wasn't to do with my single self crying over them holding hands (so cute), it was the massive team supporting them throughout their first official tour that had me green-eyed. Although, my jealousy got me wondering: who's in Prince Harry and Meghan Markle's entourage anyway?

If you've marathoned The Crown like I have, it's no secret that the royal's have a very supportive team behind them on their official tours. From a private secretary to advisors to PAs to stylists, these important people make sure that the tour is carried out as smoothly as possible.

If only I had this sort of reinforcement when I brave my local shopping centre.

The entourage was jointly put together by Harry and Markle, according to Hello! magazine, and was 11-strong. Among the group was celebrity stylist George Northwood, who was reportedly paid for privately by the Duchess — much like Kate Middleton did for her official visit to South East Asia in 2012. Northwood is also the genius that styled her hair for her wedding reception in May, reports Vogue. Previously, he has styled the likes of Alexa Chung and Rosie Huntington-Whiteley too, according to The Sun.

Similarly, the Duke and Duchess of Cambridge had a pretty impressive entourage for their visits to Stockholm and Oslo earlier this year. Arriving with a team of 13 rather than 11, they comprised of a similar amount of private secretaries, stylists, press staff, and senior advisors, according to the Guardian.

And those outfits, goodness. Markle's close friend and reported stylist Jessica Mulroney — whose three children were an integral part of Markle's wedding party — flew to the UK last week to prep the Duchess on her wardrobe before recent royal events, according to Good Morning America. This included Prince Louis' christening, for which she wore Ralph Lauren. Mulroney also reportedly styled Markle in the stunning Dior dress she wore at the Royal Air Force 100th Anniversary, as well as that gorgeous Givenchy skirt and sweater she wore on her arrival in Dublin, as reported by Harper's Bazaar.

With all this excitement surrounding the couple, you may be wondering: Why was Ireland the chosen destination for the couple's first tour? Well, it's all about grabbing that powerful excitement and energy and channeling it into important causes, including a visit to the Gaelic Athletic Association and a chance for Harry and Markle to pay their respects at a memorial for the Irish Famine.

The trip was also to aid a strong relationship between England and Ireland, according to Canadian magazine Maclean's, referencing a four-day visit made by Prince Charles and Camilla, Duchess of Cornwall that occured less than a month before Harry and Markle's trip.

Much in the same, Harry's father and stepmother's visit to the green isle was to "highlight the essential partnership and friendship between the two nations, as well as the deep connections between their people," as stated in the official press release for the tour.

If this two-day trip is anything to go by, I'm confident that Harry and Markle have a seriously supportive network around them when the pressure is on. But it's still okay to be a little jealous, though. I mean, c'mon.