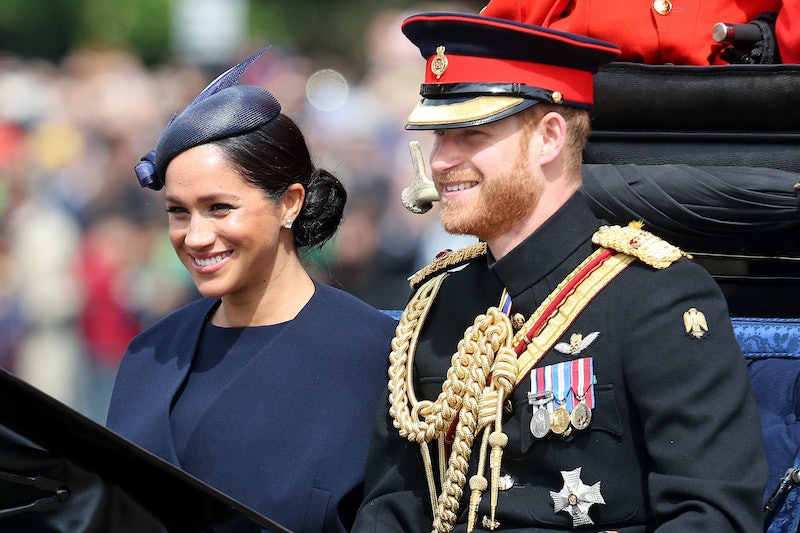 Baby Archie is less than two months old, but his first international trip is already booked. On Thursday, Prince Harry and Meghan Markle confirmed their South Africa tour with an Instagram post. Not only did they fill their fans in on the details that have been put together so far, but they also announced that this is their "first official tour as a family," which is so exciting.

The post included a photo of Markle and Harry together, along with a caption that laid out the route they'll be taking this fall. It seems that they're heading out this fall, and will be hitting Malawi, Angola, and Botswana.

"TRH The Duke and Duchess of Sussex are excited to announce that they have been asked to carry out a tour to Southern Africa this autumn. The Foreign and Commonwealth Office have requested a visit to South Africa as well as The Duke carrying out visits to Malawi and Angola. His Royal Highness will also do a short working visit to Botswana on route to the other countries. The Duke and Duchess are really looking forward to meeting so many of you on the ground and continuing to raise awareness of the high impact work local communities are doing across the commonwealth and beyond. This will be their first official tour as a family!"

This news comes after royal communications about the upcoming visit surfaced on Twitter.

Although they haven't announced an official date yet, the tour is scheduled to begin in the fall, which gives Archie plenty of time to get a little bit bigger before he hits the road. This will definitely be an exciting time for their family as they get to travel with their son for the first time... and it's exciting for the royal family fans who get to see Archie in action along the way.

And as for Markle? She already made her first post-baby public appearance earlier this month at Trooping The Colour, and there's no doubt she'll be seen out and about long before she and Harry set off for Africa.

The trip will be a good way to introduce Archie to the rest of the world, since at this point, only a few photos of him have surfaced. Aside from the photo call that Markle and Harry did the week their baby was born, the only other time they've shared a photo of him was on their Instagram account in honor of Father's Day.. and it was the first time that the public got a good look at his face (which, of course, is adorable, as you might imagine).

Also, that tiny hand gripping onto Harry's? Cutest thing ever.

By the time the tour begins, Archie will be bigger, wiser, and may even be able to hold his own head up.

It seems like fans have a lot to look forward to when this tour kicks off later this year. Photos of Archie chilling in South Africa with his parents? Yes, please.