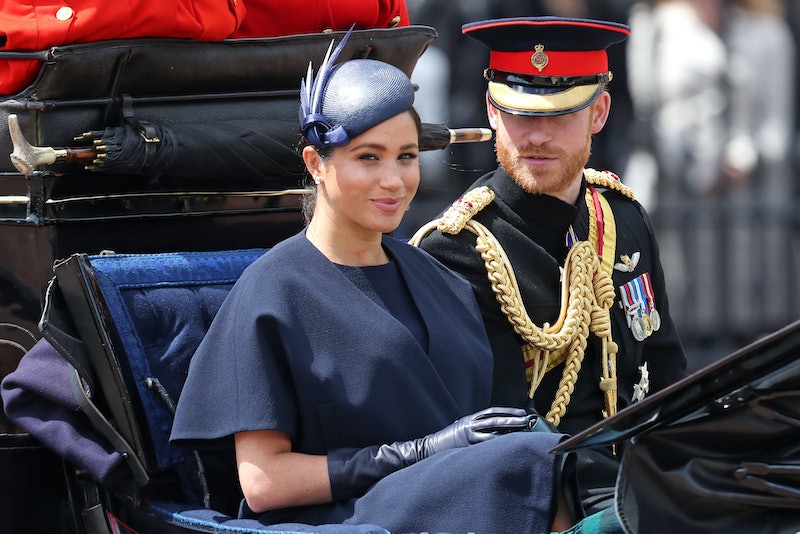 The Duchess of Sussex has returned. Meghan Markle's Trooping the Colour appearance on Saturday, June 8, marked the royal's first official return to the public eye since she and Prince Harry introduced their son Archie to the world at a May 8 photocall inside Windsor Castle. And while the newborn sadly wasn't with her, what better occasion for a day out than the Queen’s official birthday parade?

Of course it was a full family affair, too. Markle — clad in a sleek, navy Clare Waight Keller for Givenchy ensemble and Noel Stewart hat — arrived at the London fete in a carriage with Harry, as well as sister-in-law Kate Middleton, Duchess of Cambridge and mother-in-law Camilla, Duchess of Cornwall. Later, she joined the Queen, along with more members of the royal family — including Prince William and his children Princes George and Louis and Princess Charlotte — to watch a flyover by the Royal Air Force, a yearly tradition, according to Kensington Palace.

Although the Queen actually turned 93 on April 21, the parade is held in June every year to great fanfare, including gun salutes in central London at midday: a 41 gun salute in Hyde Park, a 21 gun salute in Windsor Great Park and a 62 gun salute at the Tower of London, per family reps. The royals' official Twitter account also noted that the Queen celebrates her official birthday privately but has attended the event every year of her reign, except once in 1955 when it was cancelled due to a strike.

Markle's appearance doesn't mean her maternity leave is over yet, however, as the new mom isn't expected to officially return to her royal duties until October, according to Vanity Fair's Katie Nicholl.

“The Duchess is still on maternity leave and will not be returning to full time work until the fall,” an unnamed source told VF. “It was important to her to be at Trooping today out of respect to the Queen. She’s mirroring what the Duchess of Cambridge did on her maternity leave. You’ll probably see her at a few engagements but she won’t be back to work properly until later in the year.”

Until then, Markle will be soaking up first-time motherhood at her and Harry's home at Frogmore Cottage in Windsor, which they relocated to from Kensington Palace earlier this year. According to The Telegraph, the 10-bedroom house "has more than enough space for the family to grow, with a nursery for their baby, and room for a gym and a yoga studio — should they want one."

When the royal couple officially introduced Archie last month, Markle called motherhood "magic" so far, and added, "It's pretty amazing, I have the two best guys in the world so I'm really happy."

Today's celebration was actually Markle's second Trooping of the Colours appearance, having first attended last June, just weeks after her and Harry's fairytale royal wedding. That year's event was also the couple's first official public appearance since returning from their honeymoon.

In just one year's time, Markle's life has changed dramatically, both moving to a new home and becoming a mom for the first time. But one thing that's remained the same is how beautifully she still fits in with the her royal family.