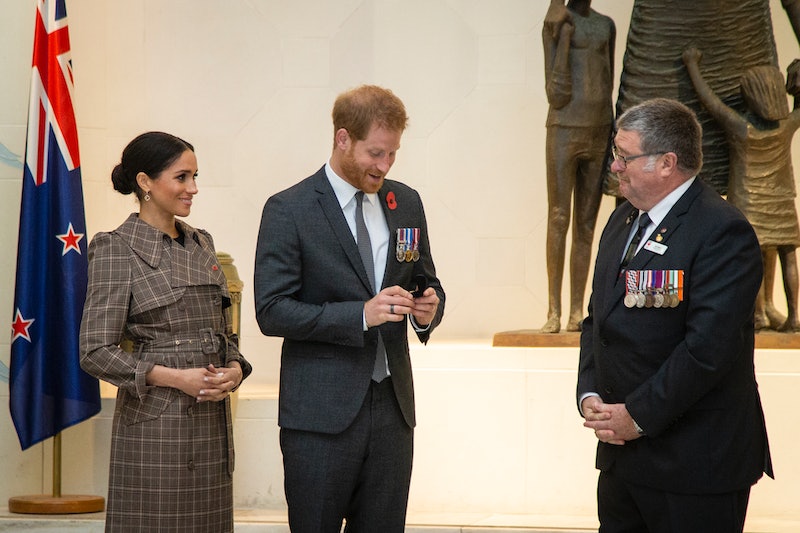 The past couple weeks have been an exciting time for royal watchers, as the Duke and Duchess of Sussex embarked on their 16-day tour of Australia, Fiji, Tonga, and New Zealand. To begin their last leg of the trip, Prince Harry and Meghan Markle arrived in Wellington, New Zealand on Oct. 28 where they visited the Pukeahu National War Memorial Park. At the war memorial, Prince Harry received New Zealand’s highest military honor, a medal called the "Badge in Gold," to honor the work Prince Harry has done with injured veterans. It was a proud moment for both of the royals, and Meghan got to participate in the ceremony by pinning the medal to Harry's suit, People reports.

Royal New Zealand Returned and Services’ Association president BJ Clark awarded Prince Harry with the medal, and in a picture shared by the Kensington Palace Twitter account, you can see Meghan Markle beaming proudly during the ceremony. The medal that Prince Harry received came at the perfect time, seeing as the Invictus Games just ended on Oct. 27 in Sydney, Australia, and that special event demonstrates Prince Harry's dedication to promoting rehabilitation for injured veterans.

As much well-deserved attention as Prince Harry received on the royal couple's first day in New Zealand, Meghan Markle later took the spotlight at a celebration of the country's 125th anniversary of universal female suffrage. Markle commended New Zealand for becoming the first country in the world where all women were allowed to vote. "Women's suffrage is about feminism, but feminism is about fairness," Markle said, according to the BBC. As People notes, this was the third speech that Markle gave on the royal tour, and it's been a great chance for the world to see how well the Duchess of Sussex fulfills her royal duties. Most would probably agree that she's been flawless.

Between Prince Harry receiving New Zealand's highest military honor and Meghan Markle's empowering speech, it seems that the Duke and Duchess's royal tour is ending on a high note. If only it could go on forever.

More like this
The Difference Between The Royal "Institution" & "The Firm" Shows Who's Really In Charge
By Savannah Walsh and Meguire Hennes
Prince Harry Will Be Able To Wear His Military Uniform After All
By Darshita Goyal and Sam Ramsden
10 Photos Of William, Harry, & Their Cousins Honoring The Queen Together
By Stephanie Topacio Long
Oprah Winfrey Revealed Her Hopes For Prince Harry & The Royal Family
By Maxine Harrison
Get Even More From Bustle — Sign Up For The Newsletter