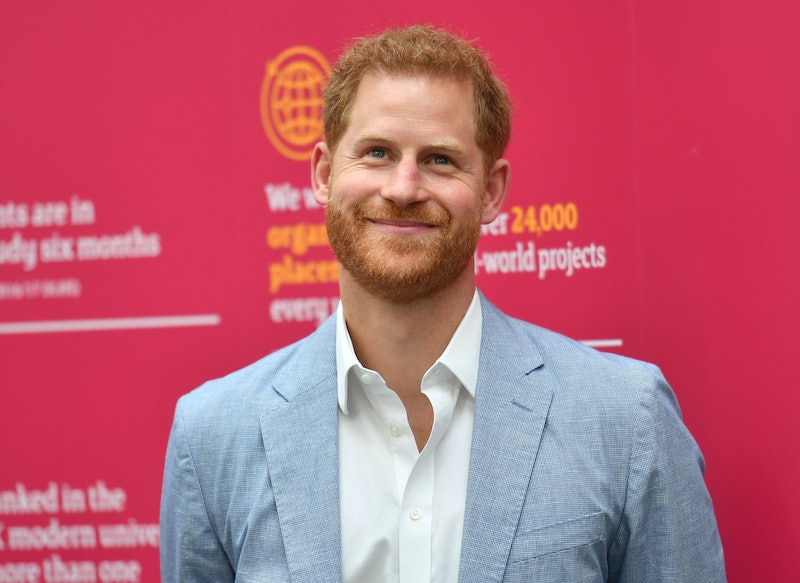 As royal watchers know, Prince Harry goes on numerous engagements from time to time in order to bring attention to some incredibly important causes. But, his most recent outing may have been one of the most special yet. As E! News reported, Prince Harry's latest engagement has a tie to Princess Diana, making his outing all the more special.

The Duke of Sussex visited the Sheffield Children's Hospital in England on July 25, 30 years after his late mother did the same. Harry visited the hospital recently to help open a new £40 million wing and to meet with some of the patients, including adorable 2-year-old Noah Nicholson, who was very much enamored by the duke's beard. The prince directly followed Diana's footsteps as he got to sign the visitor's book, the very same one that she signed during her visit in November 1989, per E! News. Additionally, he got to look through a book that contained photos of her visit, which just added another, meaningful layer to an already special engagement.

To make his visit even more special, the hospital even sent Harry home with a couple of gifts for his son, Archie Harrison Mountbatten-Windsor, whom he shares with wife Meghan Markle, as E! News went on to note. Not only did he get a stuffed teddy bear of the hospital's mascot, Theo, but he also received an adorable, custom-made blanket for Archie that featured his name, his parent's conjoined monogram, and a red, white, and blue color scheme in honor of his American nationality. Basically, it was the most perfect gift ever.

This is far from the first time that Harry has taken a note from Diana when it comes to the causes that he supports. As People noted in June, the Duke and Duchess of Sussex's upcoming trip to Africa will see the couple carrying out Princess Diana's legacy. While the late royal did extensive work in the continent, one of her visits to Angola in 1997, in particular, in which she walked through an active landmine area while donning protective gear courtesy of the HALO Trust, was one of her most iconic. The purpose behind the iconic moment was to raise awareness for the fight against landmine use.

According to Town & Country, Harry, a patron of the HALO Trust, has taken up the same cause years later, and has spoken out against the use of landmines, just as the Princess of Wales did. Since the prince, along with Markle and their son, is expected to visit Angola during his tour, there's a good chance that he could follow in Diana's footsteps by addressing the landmine issue once more.

On June 27, it was officially announced via Instagram that the Sussex family would head on a tour to Africa in the fall. The family-of-three is set to head to Angola, South Africa, Malawi, and Botswana, with their post detailing, in part:

"The Duke and Duchess are really looking forward to meeting so many of you on the ground and continuing to raise awareness of the high impact work local communities are doing across the Commonwealth and beyond. This will be their first official tour as a family!"

If Harry does honor Diana's legacy in some way during his upcoming visit to Africa, as he has done many times before, it will just make the Sussex family tour that much more special.