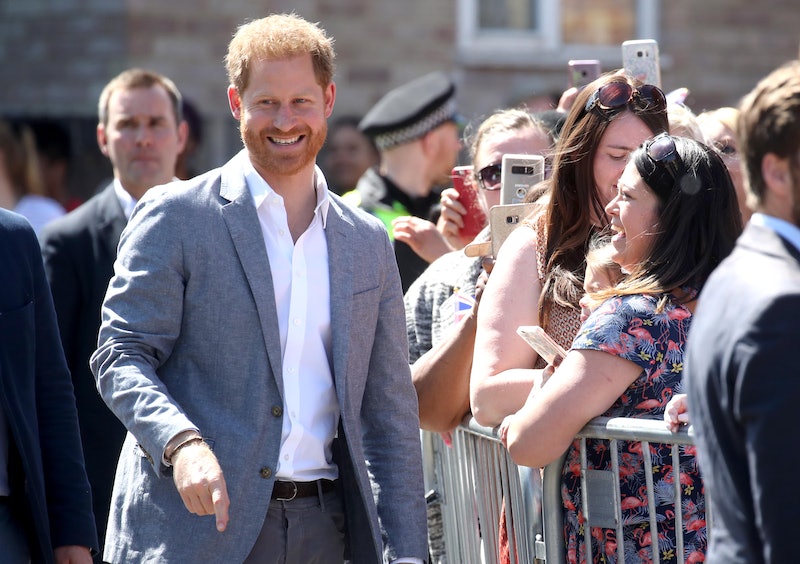 Prince Harry may be a new parent to baby Archie Harrison, but he's not taking a break from his royal duties just yet. On May 14, the Duke of Sussex visited the Oxford Children's Hospital and even answered some questions about his bundle of joy. According to ELLE, Prince Harry had the sweetest thing to say about baby Archie proving that the royal has totally taken to fatherhood.

The Daily Mail's royal correspondent, Rebecca English, revealed on Twitter that Harry had a small conversation with one of the people at the hospital, Ida Scullard, about the newest addition to the British royal family. “He said he's getting used to the baby and how Archie has fitted into family life," Scullard said, "He said he just feels part of the family, and he can't imagine life without his son.” Does it get any sweeter than that?

Adorably enough, the duke also related that he had a bit of a sleepless night recently thanks to his son, but that he wouldn't change it for anything in the world. As I'm sure many royal watchers can agree with, it's such a joy to hear that Harry and his wife, Meghan Markle, have taken to parenthood and that baby Archie has fit in seamlessly into their lovely family.

Of course, this isn't the first time that the Duke of Sussex has gushed about his baby boy. On May 6, when he announced the birth of his son, he described just how amazing it was to greet his little one. In his statement, he also gave a shoutout to his wife, and to all women, for their strength when it comes to the birthing process. He said:

"It’s been the most amazing experience I could ever possibly imagine. How any woman does what they do is beyond comprehension. But we’re both absolutely thrilled and so grateful to all the love and support of everybody out there. It’s been amazing so we just wanted to share this with everybody."

He continued to say:

"I haven’t been at many births; this is definitely my first birth, but it was amazing, absolutely incredible. And as I said, I’m so incredibly proud of my wife and as every father and parent would ever say, your baby is absolutely amazing. But this little thing is absolutely to die for. I’m just over the moon."

At the time of this announcement, Harry did not reveal to reporters what the baby's name was. The name reveal, and a photo op with the whole family, came a couple of days later. On May 8, it was announced via the Sussex Royal Instagram account that the child's full name is Archie Harrison Mountbatten-Windsor (he does not have an official royal title, hence the use of a surname).

If you're wondering where Archie's surname comes from, it was decided in 1917 by King George V that his descendants would carry the "Windsor" surname, according to the royal family's website. In 1960, Queen Elizabeth and Prince Philip decided to add Philip's last name of "Mountbatten":

"The effect of the declaration was that all The Queen's children, on occasions when they needed a surname, would have the surname Mountbatten-Windsor."

Based on Harry's recent comments about Archie Mountbatten-Windsor, it's clear that the Duke and Duchess of Sussex's little one has completely captured his parents' hearts.

More like this
Tyler Perry Makes Rare Comment About Meghan Markle & Prince Harry's Love Life
By Radhika Menon
'The Crown's Matt Smith Reveals Prince Harry's Hilarious Response To The Series
By Bustle UK
Prince George Made The Cheekiest Comment About Prince William
By Sam Ramsden
The Prince William & Rose Hanbury Rumours, Explained
By Frances Stewart and Sam Ramsden
Get Even More From Bustle — Sign Up For The Newsletter