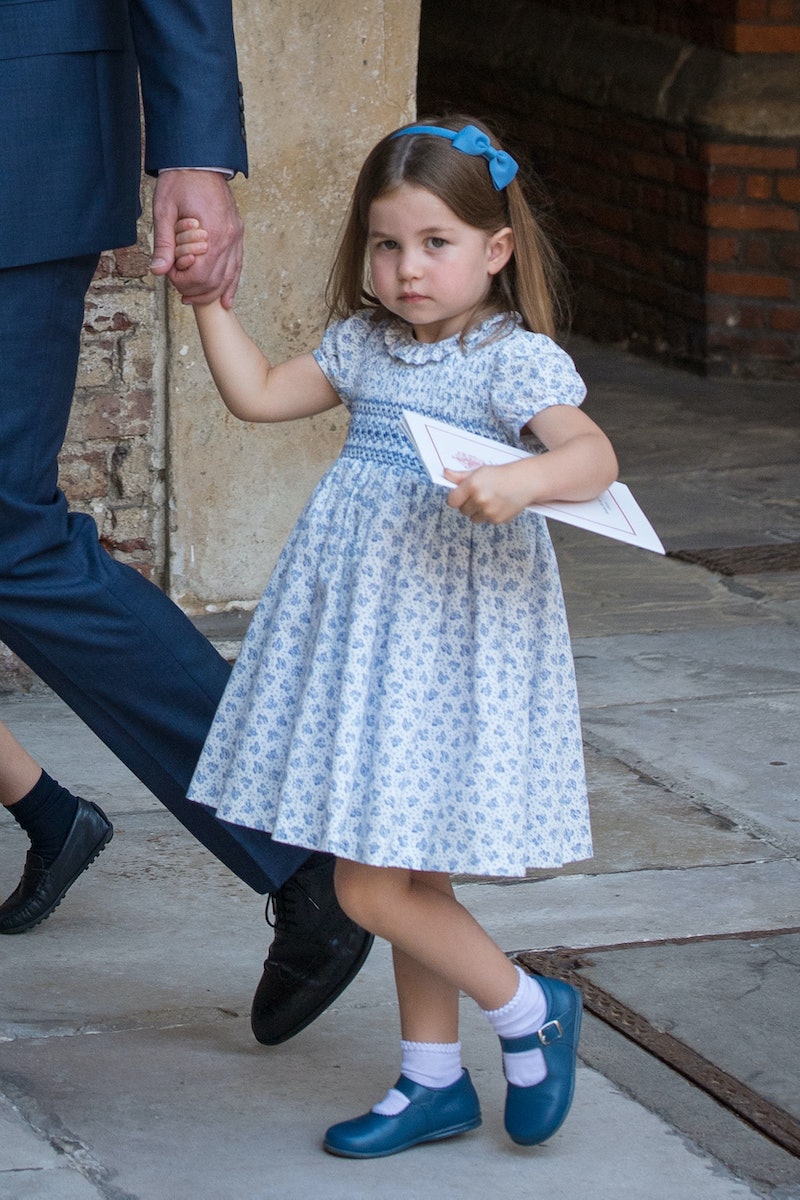 Princess Charlotte comes from a long line of stylish women, so it's no wonder that at just four years old she is already exhibiting signs of fashion sense. Princess Charlotte donned her first royal accessory this month, and fashion pundits everywhere are taking note. The royal just debuted a very sophisticated unicorn purse, proving she has a keen eye for color and trends. The unicorn fad has been in fashion for years.

The fashion accessory made news on July 22, when the Irish Guards celebrated His Royal Highness's Prince George's sixth birthday on Instagram. The account posted a never-before-seen photo of Prince George, his siblings, and the Irish Guard's mascot, Domhnall. "Domhnall and the irish guards would like to wish HRH Prince George a very happy birthday. Always ready to serve," the caption read.

The photo might have been posted in honor of the birthday boy, but Princess Charlotte stole the show with her on-trend outfit. Wearing a pink floral dress with a Peter Pan collar, Princess Charlotte accessorized her look with a unicorn clutch.

The clutch consisted of the head of an iridescent unicorn with pearl blue ears and horn. The strap came from the side of its head, which the princess held onto during the photo.

The royal women have a long history of using handbags for different purposes while out in public outings, so Princess Charlotte is just carrying out royal tradition with her unicorn clutch.

Queen Elizabeth, for example, uses her purse to signal social cues to a room full of guests or political dignitaries. When Her Majesty wants the room to know that she would like to leave dinner in the next five minutes, she reportedly puts her bag on the table to signal to the guests that the party is nearing to a close.

Royals also use their clutches to get out of any awkward touching. It is a royal etiquette rule that a person is not allowed to touch a member of the royal family unless they first extend the contact. However, in order to establish immediately that a royal does not intend to give out handshakes or hugs, often times the women go out holding a clutch with both hands. Kate Middleton is especially a fan of this move.

Anya Hindmarch, the designer behind these bags, told the Telegraph, "We used to laugh when we designed what she called her 'cleavage bags,' little satin clutches which she would cover her cleavage with when she stepped out of cars."

Princess Charlotte is now joining a long tradition of purse lovers in her royal family.