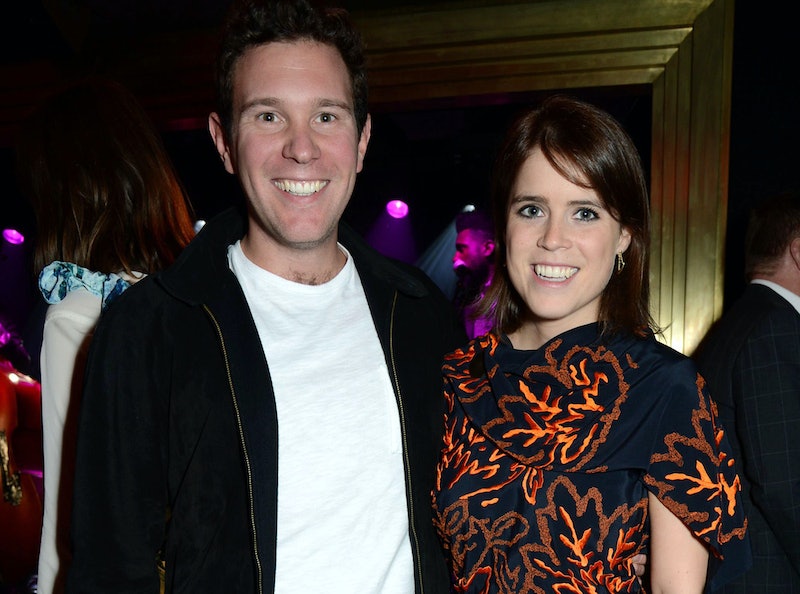 Princess Eugenie and Jack Brooksbank are expecting a lot of people at their wedding. The couple have invited 1,200 members of the public and more than 800 friends and family members to watch them become husband and wife at St. George's Chapel in Windsor Castle on Oct. 12. Their extensive guest list includes some pretty famous names; in addition to the royal family, the couple has also invited David and Victoria Beckham, Robbie Williams, Ayda Field, Ellie Goulding, James Blunt, Naomi Campbell, and Kate Moss. Now that is some list. Can you imagine Princess Eugenie's royal wedding seating chart?

Well, not everyone invited will get a seat in the church. According to the BBC, the lucky members of the public chosen to attend will watch the wedding from inside the grounds of Windsor Castle, but they won't actually be in St. George's Chapel. "The invitees will be able to watch guests arrive and a live broadcast of the service," it reported.

However, that certainly won't leave the church empty. CNN reports that more than 800 friends and family will be seated inside the gothic chapel when the ceremony takes place. But where will everyone be seated and how is it decided?

Ahead of the big day, Eugenie and Brooksbank would have had to discuss in detail with their wedding planners just where each of their many guests would sit. You see, the church is divided into three main sections; the left choir, the right choir, and the nave seating along the aisle. It is tradition that the Queen and the rest of the royal family sit in the righthand choirs, closest to the altar, as was seen when Prince Harry married Meghan Markle back in May.

There has been some speculation over whether Eugenie's mother Sarah Ferguson, Duchess of York, and father, Prince Andrew, Duke of York, will sit together at the ceremony given that they divorced in 1996. However, despite splitting, the former couple are still close friends and both live still live at the Royal Lodge in Windsor. While it is expected that Ferguson will arrive at the ceremony alone, according to the Express, she will be sat near the royal family.

With regards to the nave seating, which is comprise of rows to the right and left of the aisle, this is where Eugenie and Brooksbank's many celebrity friends will be sat. The likes of Pixie Geldof, Richard Bacon, Jimmy Carr, and Tracey Emin will all be assigned seats in this section to watch the service.

Ahead of the wedding, Prince Andrew opened up during an interview with ITV about why the ceremony was taking place at St. George's Chapel. He said: "It was what I was told; where it was going to take place. The Queen very firmly said, 'St. George's is where you are having the wedding.' So, I said, 'Yes Mam,' turned to the right, salute and carry on."

The Duke also offered some touching words about his daughter and his new son-in-law. He added: "She's a chip off the old block. She's a little like her father. She's quite decisive, but she's got a huge heart. Jack is an extraordinary young man; one of the kindest hearts I think I know. He's perhaps met his match with Eugenie and it's a good match. It's wonderful watching them interact with each other because it's almost as if they're a married couple now.

"I have huge hopes. I am sure they will be massively in love for the rest of their lives."