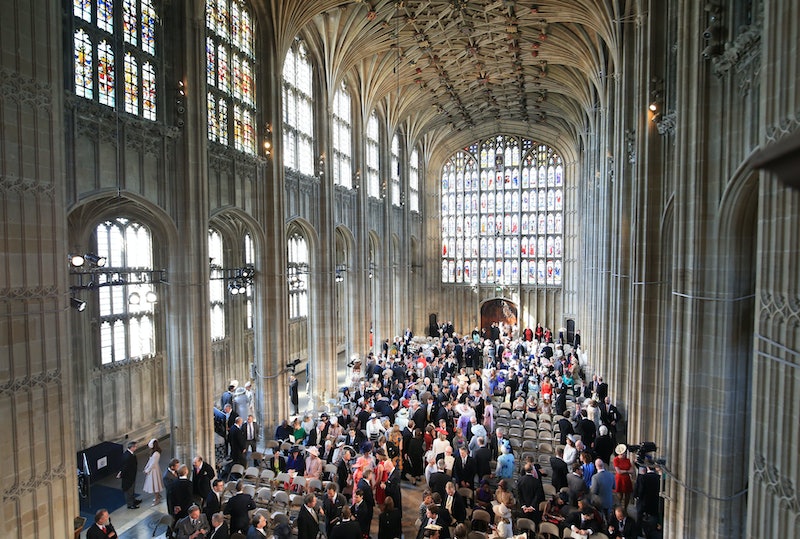 As Meghan Markle and Prince Harry's wedding got underway, fans watching at home had tons of questions. What dress is she wearing? How will the cake taste? What's the seating chart at the royal wedding? As with most things royal wedding-related, the royal wedding seating chart at St. George's Chapel in Windsor Castle was meticulously planned — despite how random it may seem. Here's what you need to know about the guests as they filed into the church prior to Markle and Prince Harry's arrival.

As for the nave seating, this is where Markle and Prince Harry had the most control over who they wanted to invite. As it's not a part of the official choir seating, the nave is made up of rows of chairs lined up to the right and left of the aisle.

Amongst the guests who were seen arriving at the church, the cast of Markle's former USA series Suits (including Sarah Rafferty, Abigail Spencer, and Patrick J. Adams) had all flown to the UK to attend, as well as stars like George and Amal Clooney, Victoria and David Beckham, James Corden, Idris Elba, Serena Williams, Oprah Winfrey, and Markle's close friend Priyanka Chopra. These guests most likely sat in the nave, while Raglund and the royal family — including Queen Elizabeth II, Prince Phillip, Sarah Ferguson, Princess Eugenie, Princess Beatrice, and Prince Charles — were in the choir seating.

As previously reported, Markle did not have a classic bridal party including a maid of honor and bridesmaids; as she could not choose amongst her close friends, Markle opted to enlist the children of her best friend, Jessica Mulroney, as well as Prince Harry's godchildren, and Prince George and Princess Charlotte. This means that Markle and Prince Harry's friends were entirely in the choir seating and the nave seating rather than at the altar with the couple. The only familiar face we saw standing at the altar with the happy couple was William, the Duke of Cambridge, who stood by Prince Harry at the altar as he and Markle exchanged their vows.

As St. George's Chapel is a rather small wedding ceremony venue — it only seats about 200, which is small as far as royal weddings go — the guest list was kept to Markle and Prince Harry's good friends and family, ensuring the day would be a celebration of love and happiness more than anything else. This is, of course, reflected in the seating chart, and the event proved to be a massively star-studded event filled with those who have been known to be close to the couple over the years.

More like this
Kim Kardashian Is Releasing A Line Of Earbuds With Beats
By Alexis Morillo
9 Unmissable Moments To Relive From The Commonwealth Games
By El Hunt
The Best Time To Date After A Breakup, According To Experts
By Bustle Editors
12 Ways You're Sabotaging Your Love Life
By Teresa Newsome and Lexi Inks
Get Even More From Bustle — Sign Up For The Newsletter