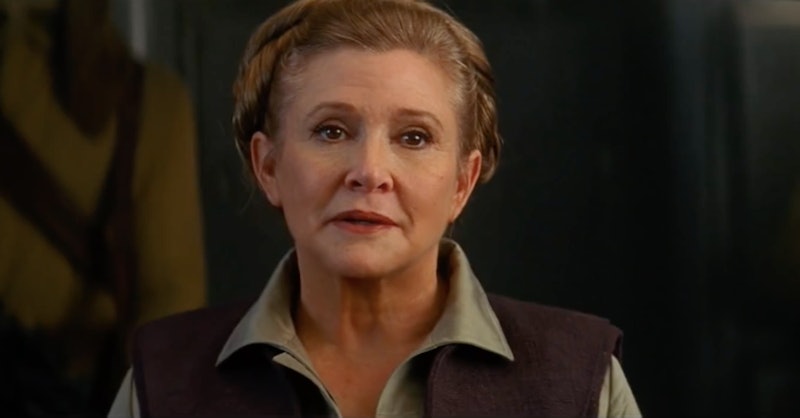 Hear ye, hear ye: We have an unofficial avatar of the Women's Marches all over the world and it's Princess Leia. That's right. Princess Leia was everywhere at the Women's March in Washington, D.C., as well as at various sister marches across the world. The spirit of Princess, the General, Leia Organa Solo was living and breathing in the hundreds of thousands of women and men who took to the streets to peacefully protest President Trump and his incoming administration. Princess Leia appeared on signs aplenty in the crowds. Gosh, Carrie Fisher would be so, so proud. Don't you think?

During the Women's March, Princess Leia's image has become associated with resistance and hope, two tenets of the march itself. Frequently during the march, signs with her face and the slogan, "A woman's place is in the Resistance" appeared. This only drove home the feeling that now, more than ever, it is important to have badass female avatars and idols by our side regardless of whether or not they are fictional.

Fisher, who passed away unexpectedly in December 2016, is remembered for her tenacious, pugnacious, rebel spirit. Fisher was an avowed feminist; she was every one of us. Let's take a moment to appreciate how other women paid tribute to her while continuing her good work.

More like this
Everything To Know About Obi-Wan Kenobi Season 2
By Kadin Burnett
Who Is Liam Neeson's Character In The Obi-Wan Kenobi Finale?
By Kadin Burnett
Did *That* Character Really Die In The 'Stranger Things' Season 4 Finale?
By Grace Wehniainen
Here's Where Your Favorite Characters Stand After The 'Stranger Things' 4 Finale
By Grace Wehniainen
Get Even More From Bustle — Sign Up For The Newsletter