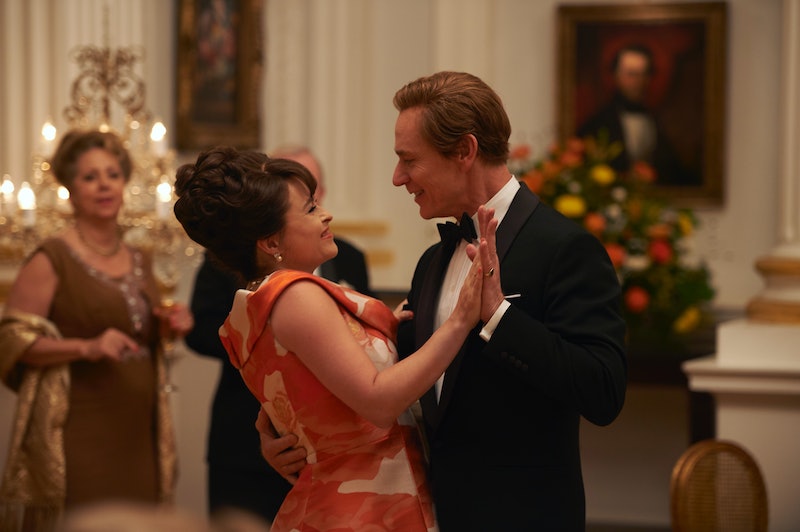 In The Crown Season 3, Princess Margaret goes to Washington. In an episode focused on Queen Elizabeth's sister titled "Margetology," fans see her partying it up with President Lyndon B. Johnson in the name of diplomacy. But, the real story behind Princess Margaret's White House visit was actually a lot less scandalous.

In 1965, Margaret toured the U.S. with her husband Lord Snowdon, visiting Los Angeles to tour the Universal Studio lot and traveling to an Arizona ranch. Their final stop, on November 17, was the White House where they were invited to a black tie dinner hosted by President Johnson and First Lady Claudia "Lady Bird" Johnson.

In the episode, Margaret, played by Helena Bonham Carter, is asked to visit the White House on official royal business. She drinks, dances, sings, and swears with Johnson, earning his respect. Even if it doesn't earn her much of that from her big sister.

In real life, there was some dancing at this party of 150 guests — many stars and politicians, as the cover of Life magazine, below, shows. Margaret's dinner with President Johnson even lasted until the wee hours of the morning, according to a New York Times report following her visit, per Harper's Bazaar. "The party lasted longer than most White House affairs," the 1965 story read. "Margaret and her husband did not leave until 1:35 this morning and the Johnsons, celebrating their 31st wedding anniversary, stayed on until the orchestra struck up 'Good Night Ladies' at 2 a.m."

While Margaret's U.S. tour was dogged by rumors of hard partying in Beverly Hills, by all official accounts, her White House visit was far more tame than The Crown lets on.

The scenes of Margaret swearing and drinking alongside the American president in The Crown come from a place of truth, but they're not explicitly accurate either. When fact-checking Season 3 Episode 2, British historian Robert Lacey told USA Today that there is evidence that some of Margaret's lewdness was real. "She could be that loud in private, and that’s why it’s suggested in that particular episode (that) Princess Margaret got on so well with Lyndon Johnson, who was quite well known for his own crude sense of humor," Lacey told the paper. "There is historical evidence for both of those."

However, royal expert Hugo Vickers rejected the idea that Margaret would be doling out dirty jokes in front of a foreign leader. "It's made up," Vickers told British GQ. "I know it's a drama, but kissing [Lyndon B] Johnson smack on the lips and all that stuff? It's all rubbish.”

Worse, Vickers, who knew the princess personally, believes the episode sends the wrong impression of the royal. "Princess Margaret was a spirited person and she had good conversation," he said, "but she was slightly more serious than people tend to relay. She was intelligent.”

In actuality, Margaret's words from that night were far more plainspoken than the jokes seen in The Crown, as documents housed at the Lyndon Baines Johnson Presidential Library in Austin, Texas show. During her toast, Margaret thanked her gracious hosts across the country who "touched us greatly, and it will make us take home superlatively happy memories of all we have done and seen," per Town and Country.

While it might be fun to believe The Crown's take on Margaret's Washington visit, it appears the princess was on her best behavior. This might not make for the best TV, but did help British-American relations.