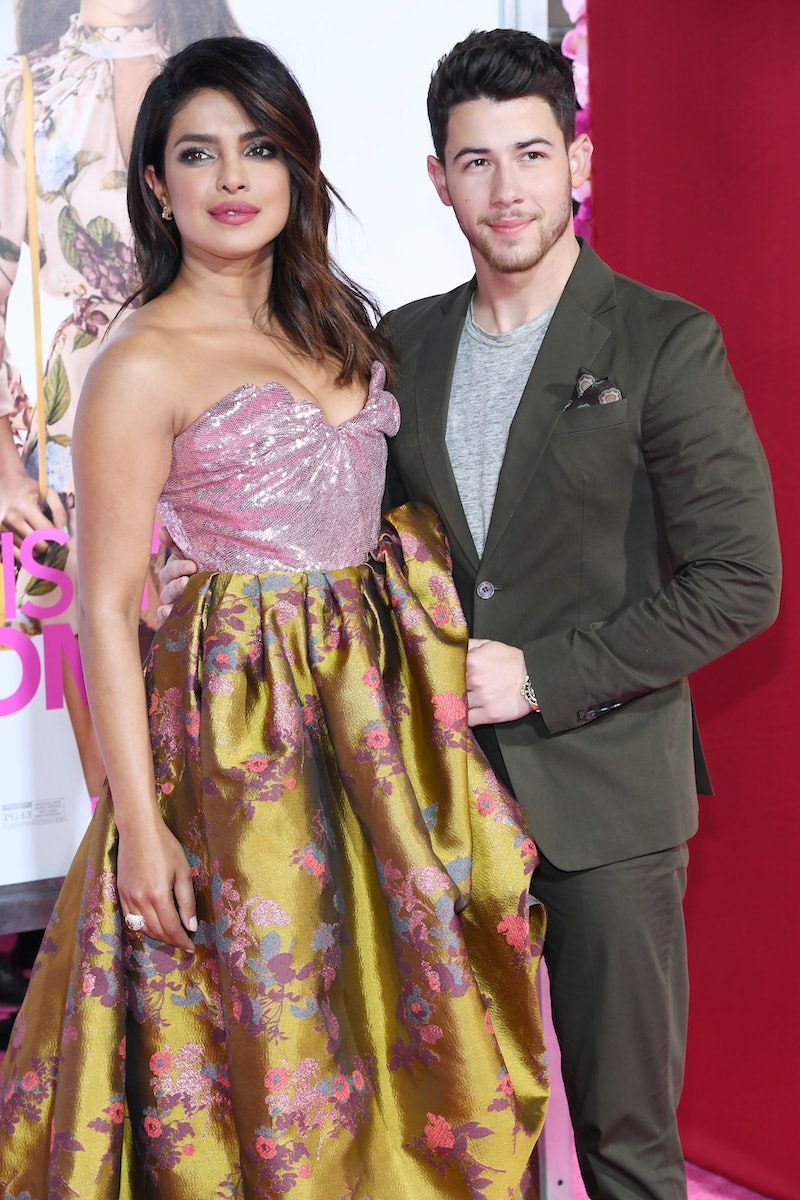 Feb. 14 is right around the corner, which means many couples are getting to ready to celebrate the romantic holiday together. Even Priyanka Chopra and Nick Jonas will spend Valentine's Day — their first as husband and wife — together in the most special way possible. Chopra and Jonas will actually be in London, and if you've been following their love story you know exactly why the city is so meaningful to them.

While chatting with Entertainment Tonight during the Los Angeles premiere on Monday for her new film Isn't It Romantic, Chopra dished about their V-Day plans,

"We were not even supposed to be in the same city together, but we're both in London now coincidentally, so yeah, it should be special."

For those who aren't already aware, Jonas purchased Chopra's engagement ring in London. However, he didn't select it in the traditional way. In a joint interview with Vogue, in which Chopra was the magazine's January cover star, Jonas revealed he shut down an entire Tiffany & Co. in London in order to choose the perfect diamond ring. Better yet, his brothers were with him. That's right, the singer totally pulled an Andrew Hennings from Sweet Home Alabama.

Jonas also dished to Vogue that he knew he was going to marry the former Quantico star after just three dates. That said, they had known each other for about a year and a half at that point in time.

Jonas didn't pop the question in London, but rather whisked Chopra off to Crete, Greece for the proposal, which also served as a birthday trip for her. The former Jonas Brothers singer asked her the big question right after midnight, so their engagement anniversary and Chopra's birthday would be on different days.

"I got down on one knee, again, and I said: Will you make me the happiest man in the world and marry me?" Jonas dished about the proposal. "No joke — she took about 45 seconds. Forty-five seconds of silence."

Chopra said she was speechless, which led to Jonas saying to her at that moment, "I’m going to put this ring on your finger now unless you have any objections." Obviously, the engagement led to the two marrying, which has changed Chopra's life for the better.

As she told ET at the Isn't It Romantic premiere about why she loves being married to Jonas,

"It’s so amazing to have someone out there rooting for you and you know that that’s your partner and you know that they are always on your team and whatever happens that’s your person and that’s such an amazing security and I loved it. I think just the safety and the consistency of it. Just knowing that whatever happens, you’re not in it alone and there is such a beauty to that."

That's exactly what marriage should be. Chopra and Jonas are lucky to have found one another and now they get to enjoy Valentine's Day not only as a couple, but in a city that will forever hold a special memory for both of them.