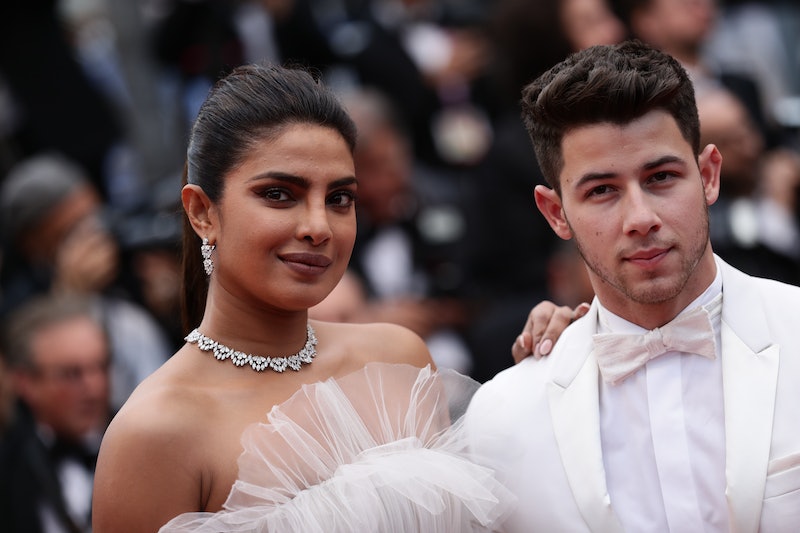 Months after Priyanka Chopra and Nick Jonas said "I do," one of the newlyweds is speaking out aout some of the negativity they received online from those who thought that the couple was "oversharing" when it came to their wedding. According to BuzzFeed, Chopra responded to criticism about her wedding to Jonas with a perfect message about keeping things in perspective.

While she didn't acknowledge any of that, rather unfair, criticism around the time of her December nuptials, Chopra is now opening up about how those negative comments made her feel. In an interview with the Sunday Times, published on June 2, the actor pointed out that people would not mind if she posted photos from her wedding if she "wasn't a famous person." So, why should she refrain from sharing her happiness with the world? She said:

"If I wasn’t a famous person and I’d just got married, don’t you think my Insta would have photos of me and my husband? Just because I’m famous, don’t I have the ability to be proud of being a newlywed without people saying that I’m using my marriage?"

Even though there were those who felt like the married duo was "oversharing" when it came to their wedding photos, Chopra assured everyone in her recent interview that there are many things that she still keeps private:

"I gave up my right to privacy when I became a public person, it's the deal you make with the devil. But trust me, there are lots of things I still keep personal."

Chopra may have chosen to ignore the naysayers around the time of her wedding, but it was a different story when it came to her family members. The Baywatch star's husband, her brother-in-law Joe Jonas, and his now-wife Sophie Turner were all understandably angered by one article in particular that called Chopra a "global scam artist" and claimed that she was using her connection with the "Close" singer to further her own career. (The article was subsequently deleted after receiving backlash and the publication apologized to their readers and to Chopra and Jonas, according to The Guardian.)

Turner even took to Twitter to voice her disappointment in the piece, writing, "This is wildly inappropriate and totally disgusting. Very disappointed that The Cut would give anyone a platform to spew such bullsh*t." Joe felt similarly, as he tweeted, "This is disgusting. @TheCut should be ashamed to have someone write such evil words. What Nick & Pri have is Beautiful Love. Thank u, Next."

As for Chopra, she explained in her recent Sunday Times interview that she wasn't going to let the article get her down. Instead, she chose to focus on her own happiness, which should be a lesson for anyone dealing with a negative situation, "I thought, ‘I’m having a great moment, nothing is going to burst my bubble.'"

In case you missed it, Chopra and Jonas celebrated their union with multiple, lavish, fairytale-adjacent wedding ceremonies back in December 2018. And, of course, the couple went on to post many snaps from their special affair, as newlyweds everywhere are known to do in this Instagram age.

Luckily, based on her recent response, it doesn't sound like Chopra is worried about those "oversharing" naysayers. Instead, she's focused on the positives, including her lovely, newlywed life with her husband.