In a surprise move, it appears that Game of Thrones actress Sophie Turner and Joe Jonas got married in Las Vegas last night, according to a report by Entertainment Tonight. Yup, you read that right. Straight after Jonas took to the stage with his brothers for their reunion performance at the Billboard Awards, the pair hot footed it to a chapel in Vegas to make it official. ET obtained a copy of the pair's marriage license in order to confirm the reports. Bustle reached out to representatives of the couple for comment, with Turner's representative confirming the news, stating, "we can confirm Sophie and Joe were married in Las Vegas last night."

As Entertainment Weekly reports, word of the union first came about when Diplo started sharing content from the wedding on Instagram stories, captioning his post "Gonna hit up this wedding real quick". The footage shows Turner walking down the aisle, while country duo Dan + Shay sang their wedding anthem, "Speechless." Up front, you can see Jonas with his brothers, and Turner surrounded by actress Priyanka Chopra, who is married to Nick Jonas, and Danielle Jonas, who is married to Kevin. Turner looked truly iconic in white trousers, top and a veil, topped off with a bouquet, while Jonas also shared a post of Diplo apparently on the decks at the event.

This comes less two days after The Sun reported that Turner and Jonas were to wed in France in a four day event over Glastonbury weekend. It could well be that the pair still intend to host an event for friends and family, after all, they're following in the footsteps of Nick Jonas and Priyanka Chopra's gorgeous wedding in India.

In true Vegas and rock and roll style, an Elvis impersonator officiated the big day. 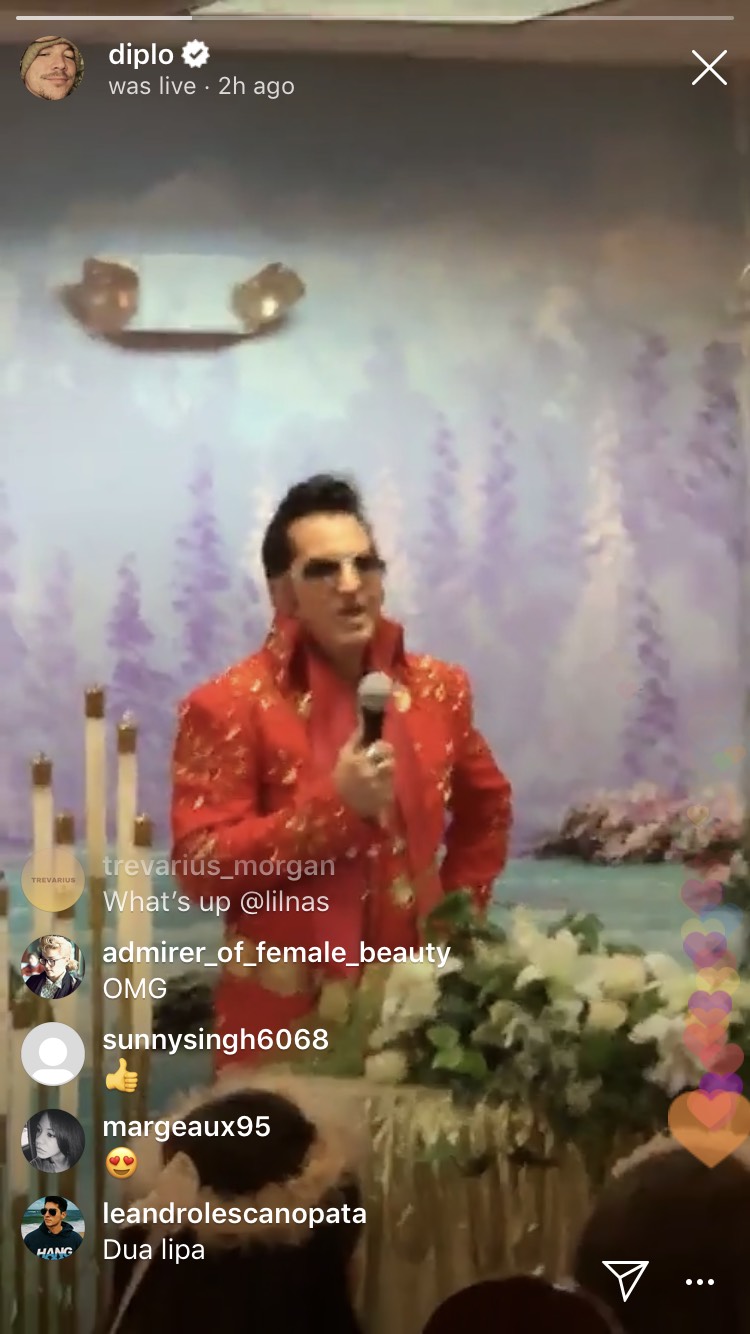 The newlyweds chose to go with a more traditional set of vows, not bothering with anything too flowery. In one of the clips shared by the DJ, Turner repeats the words "I thee wed, and I love you, and I thank God He gave me you". 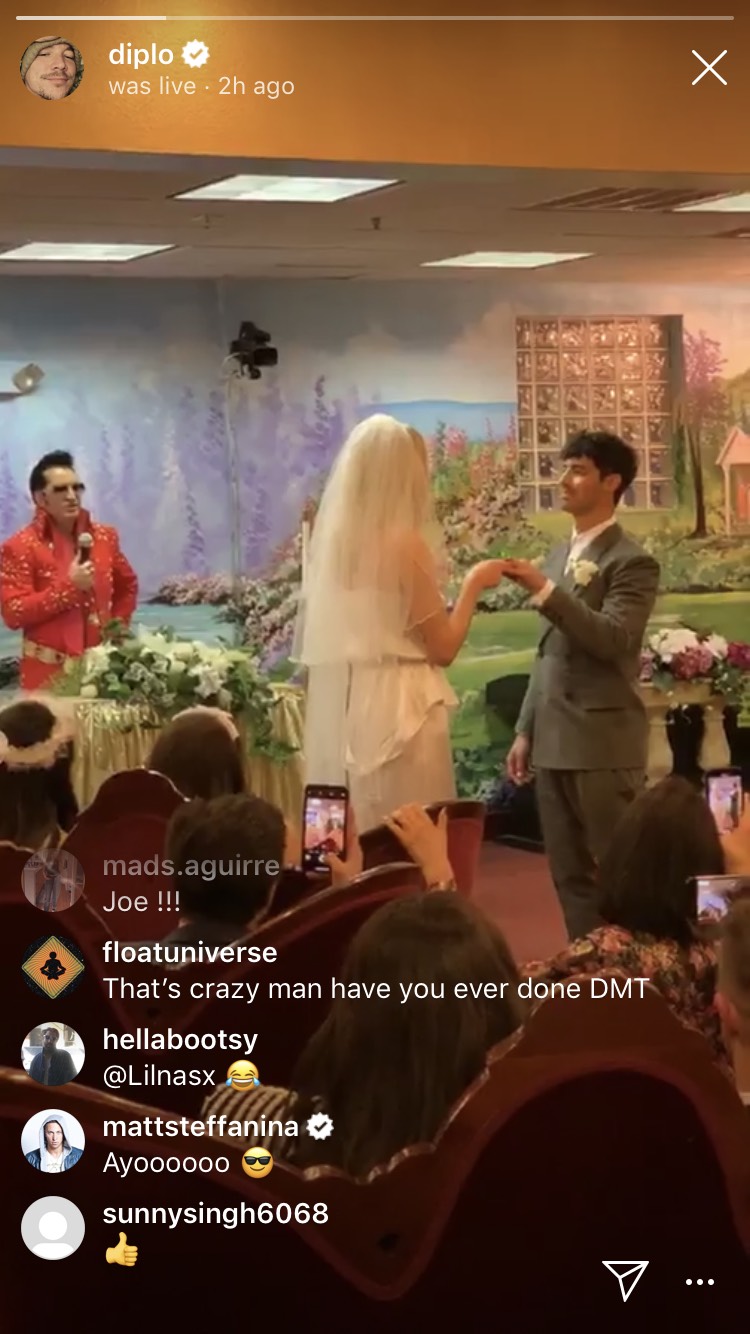 Then the adorable couple, under the king's (Elvis) instruction said together some of the cutest lines ever.

"I promise you, I will never leave you. I will love and trust you all the days of my life".

No stop it, you're crying!

I guess after the outfit choices, the second thing people will think about is the rings. What kind of crazy glamorous rings did they go for? Well in true cute AF style, the pair showed that it ain't all about that bling with a pair of matching ring pops. You know those fake rings you wore as a kid? 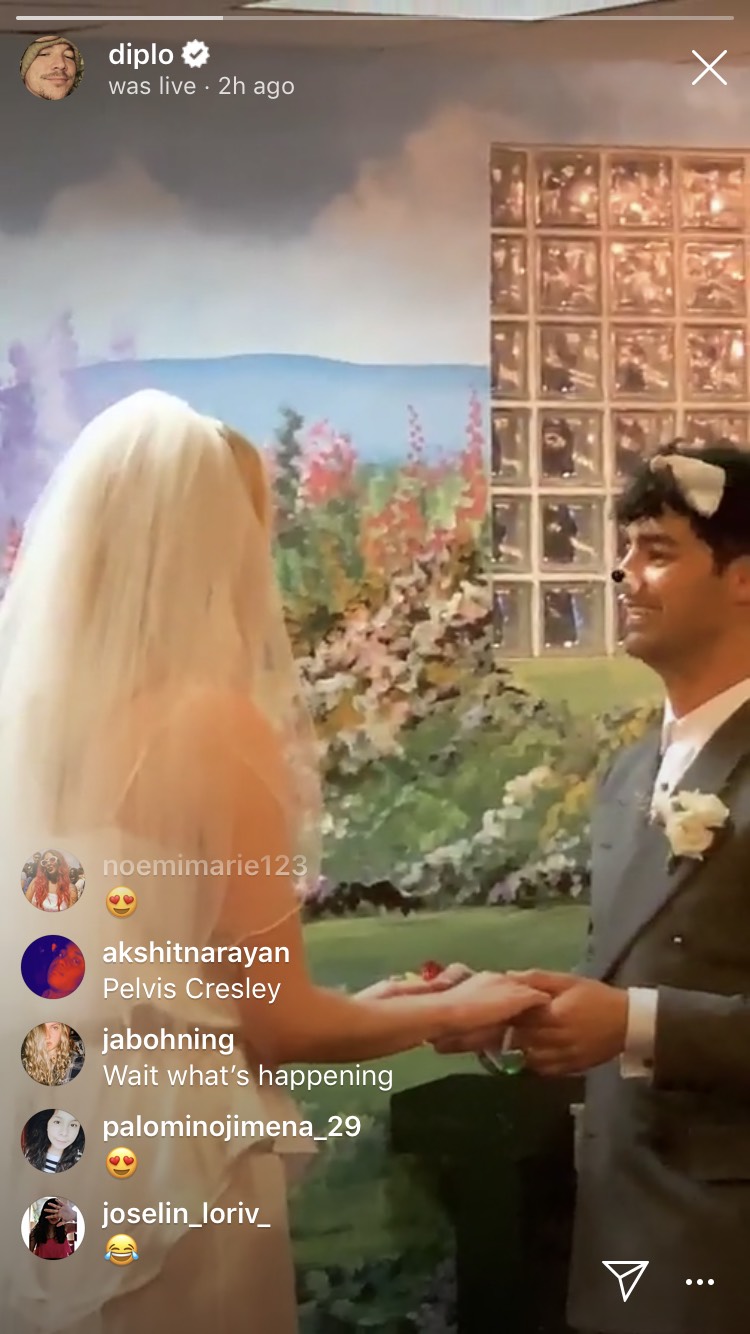 As you can imagine, when Elvis dropped the classic "you may kiss the bride" line, the attendees went off.

There's no official news yet on who were Turner's bridesmaids but Chopra was wearing quite a fetching floral crown and looked proud as punch, rushing to embrace the pair after.

Although no pictures have surfaced of the post wedding reception, one can assume there was a lot of fun to be had. Lord knows both of them know how to have a good time, and it's clear that they are absolute suckers for each other.