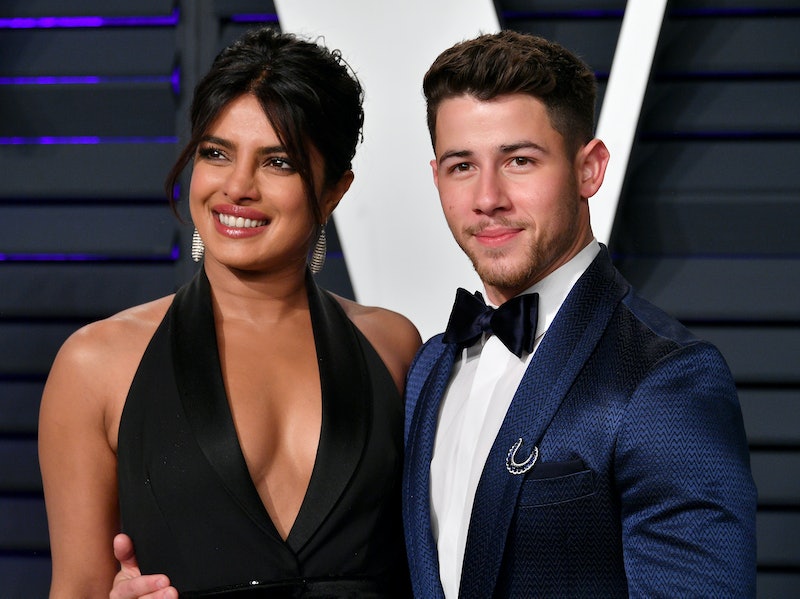 When you have a husband like Nick Jonas, you'd probably naturally want to take to Instagram to boast about all of his impressive accomplishments, which is exactly what Priyanka Chopra did recently. On April 22, Priyanka Chopra posted an Instagram tribute to Nick Jonas and, in the process, showed off just how supportive their relationship is.

Chopra's latest post proved, once again, that she and Jonas are one of the most adorable couples in Hollywood (as if you needed any more convincing of that fact). On Instagram, she shared a cute snap of herself and her significant other on Instagram, writing, "U make me smile. I’m so proud of you! #number1 #husbandappreciationpost ❤️"

Now, it could be that the former Quantico star simply wanted to post a sweet note about her hubby to show how much she appreciates him. But, there might be a specific reason for the post (in addition to being a nice message for her loved one, of course). It could be that Chopra's post is referencing the Jonas Brothers' recent major news that was reported on April 22.

In case you missed it, the group announced that they would release their next album, Happiness Begins, on June 7, following all their recent comeback. So, it stands to reason that Chopra's Instagram post, in which she wrote, on April 22, about how proud she was of her partner, was a tie back to all of the Jonas Brothers' continued success (the group has already released two singles, "Sucker" and "Cool," which have dominated the Billboard charts in the past few weeks).

Even if it wasn't a direct reference to the album news, her post is, at the very least, an adorable way for her to show some love to her talented husband.

The "Jealous" singer has been working hard, right alongside his brothers, Kevin and Joe Jonas, when it comes to the Jonas Brothers' epic comeback. As previously mentioned, following two already popular singles, the band is releasing their newest album on June 7, which they all announced on their various social media accounts. On Instagram, Kevin detailed the album news by mentioning how the brothers are coming back together after finding themselves on their "own paths." He wrote:

"After 7 years of not working together living life and finding ourselves in our own paths we came back to give you our journey in album form. I’m so excited for you to hear Happiness Begins out June 7th. I have to say out of all the albums we have done together I’m the most proud of this one. I wish I could hand it to you now but you will just have to wait a little bit longer."

The group also detailed the news on Twitter by releasing a video in which they each shared how excited they were to release Happiness Begins in June.

Ever since Chopra and Jonas exchanged vows in December, the pair have been one of the strongest, and most supportive, couples in the entertainment industry. They've stood by each other's side through various red carpet events, fun holiday celebrations, and even some work commitments (Chopra, along with the other "J Sisters," Sophie Turner and Danielle Jonas, appeared in the Jonas Brothers' music video for "Sucker"). Basically, given all of these sweet couple moments, it's more than clear that Chopra is Jonas' number one supporter, and vice versa.