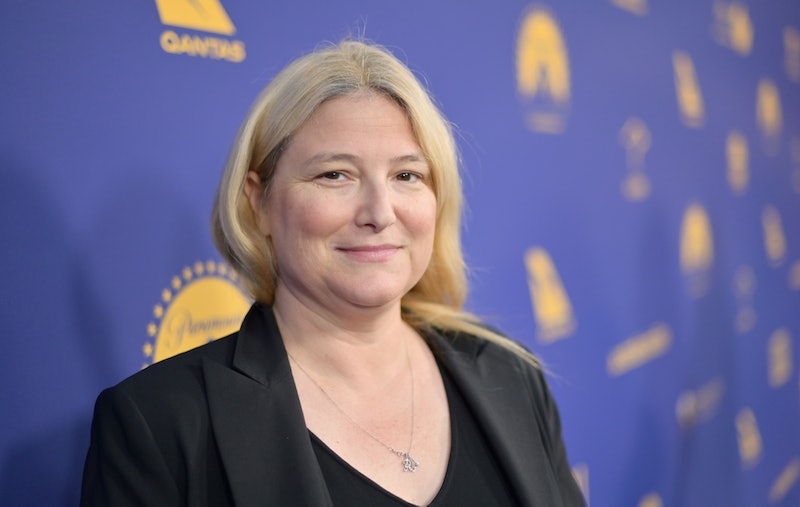 Women in TV and movies have long been relegated to one-dimensional "wife" or "mom" roles, but in recent years, that's finally started to change. According to a recent report from media research agency Shift7, female-led films consistently outperformed male-led movies at the box office from 2014 to 2017. One woman who's contributed to this milestone is producer Bruna Papandrea, who's worked on highly acclaimed, female-fronted projects including Wild, Gone Girl, Big Little Lies, and The Nightingale. And while the subject matter of these efforts vary, there's always one connecting thread: they all make space for women to be seen and heard.

Having grown up in government housing in Elizabeth, South Australia, Papandrea's single mother had to work multiple jobs to support her and her three other siblings — an upbringing that could have discouraged her, but in actuality did the opposite. "Weirdly, there was no pressure put on me and no expectations, which in a way was incredibly liberating because it meant I could grow to be whoever I wanted to be," Papandrea tells Bustle. "In my case, I was so driven to fly."

Now, she's helping others to fly, too. "Because I came from a very, very poor land and grew up with very little, I really have made a personal pledge in my life to try and help women from low socioeconomic circumstances and socioeconomic diversity access different businesses," Papandrea says. "One of the things I'm keen to do is to get women and people of color behind the camera in any way."

To work toward that goal, Papandrea started the production company Pacific Standard with Reese Witherspoon in 2012. Together, they created starring vehicles for Witherspoon in Wild, which follows a woman's journey into the wilderness to mourn the death of her mother and rediscover herself; Hot Pursuit, a cop comedy that Papandrea told Produced By magazine came from a desire to work with Sofía Vergara and recognize more Latina women onscreen; and Big Little Lies, the critically acclaimed series about a group of suburban moms who band together in the face of violence and abuse.

In 2016, Papandrea left Pacific Standard to pursue other ventures, but she has carried on her mission with Made Up Stories — a development, production, and finance company she founded in January 2017. Just as with Pacific Standard, Papandrea has continued to feature female stories and adapt female-written books, as well as champion female filmmakers. Some of Made Up Stories' upcoming projects include the "genre-bending" zombie comedy Little Monsters, starring Lupita Nyong'o; The Undoing, an HBO miniseries with Nicole Kidman that will be directed by Bird Box's Susanne Bier; and the newly announced Netflix series Pieces of Her from the all-female production team of Papandrea, Lesli Linka Glatter (Homeland), and Charlotte Stoudt (House of Cards).

But Papandrea is also committed to inclusivity in less-acknowledged aspects of the industry, from advocating to hire women to lead a movie's transportation team and serve as gaffers on set to ensuring the projects she works on are marketed to all genders, not just whoever execs think they're made for. "All of these decisions are very conscious decisions that you need to make to try and shift the paradigm," Papandrea says. "Just because we have women at the center of our stories doesn't mean that we're just making content for women. We're making content for everyone and we shouldn't limit ourselves in that way."

Furthermore, she's in the process of creating a foundation through Made Up Stories that will give young women from low socioeconomic and diverse backgrounds access to business opportunities and support, per Australia Unlimited. This last endeavor is particularly important to Papandrea, who says, "The thing that I most would be proud of at the end of my life is to have made a difference in access to women who wouldn't have potentially had it otherwise."

Whether securing places for women in front of or behind the camera, Papandrea is well on her way to meeting that goal. She's not just asking to give women more space to tell their stories in Hollywood, she's making it happen herself.

More like this
Harry Lawtey Is Weighing Up The Price Of Success
By Olivia-Anne Cleary
Paul Mescal, Man Of Mystery
By Samantha Leach and Heather Hazzan
What’s New On Netflix: Ana De Armas’ 'Blonde' & A Nick Kroll Special
By Arya Roshanian
Here’s Everything Coming To & Leaving Netflix In October
By Jake Viswanath
Get Even More From Bustle — Sign Up For The Newsletter