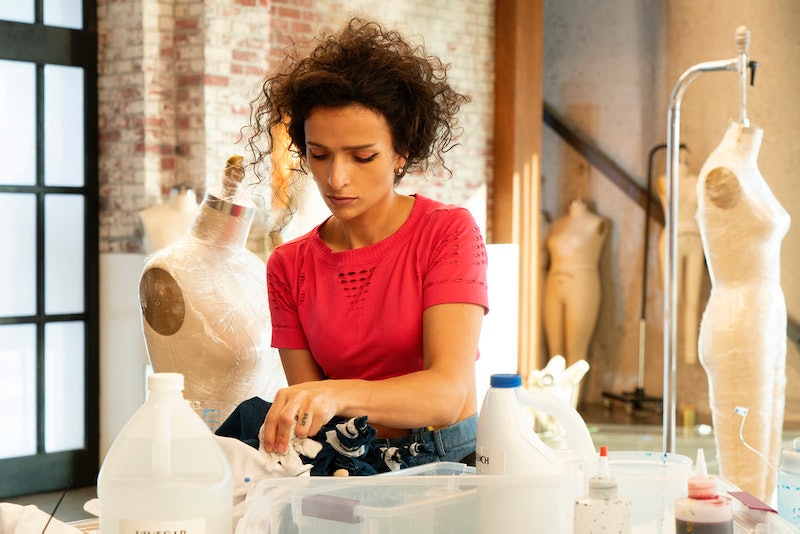 Victoria Cocieru is hoping her designs will make it past the final Project Runway test and into New York Fashion Week and then onto win the finale prize. But no matter how far she goes on the show, she's wracked up many fans who just want to get their hands on her unique designs ASAP. Victoria posted on Instagram that even some of her "haters" have purchased her clothes out of curiosity and ended up becoming regular clients and even friends. Currently, Project Runway fans wanting to buy Victoria's clothes will have to wait until she reopens her website, but that could be any day now.

According to her Bravo bio, Victoria has owned a ready-to-wear fashion brand called Kheops since 2011. She specializes in making "sophisticated, attention-grabbing looks for powerful women and incorporates bold colors and geometric patterns into her designs." That much has been obvious on her time on the show, and she even won the Goodwill upcycling challenge in Episode 4 with her asymmetrical '90s-esque but still modern power blazer. Unfortunately, Victoria never won any of the challenges where the prize was that the winning outfit would go into production with Ninteenth Amendment. So, fans can't buy any of her looks from the show at the moment like they can with a few of the other contestants.

There's also no set timeline for when her website will be back up. The landing page just says it's "coming soon... very soon! Get ready to change your style." The Internet Archive reports that Kheops was up and available for shopping in April of 2019, but seems to have been shut down during Victoria's time on Project Runway — perhaps in anticipation of a big post-finale relaunch. When it was last up, the site offered mostly jackets and dresses with Victoria's signature styles like big shoulders and cutouts. Prices ranged from around $140 to $200.

That's not necessarily an indication of what consumers can expect when her site reopens, though. Depending on how well she does in the finale, demand might be really high for her outfits, and they could sell for much higher than they used to and much more quickly. Fans who want to know the minute they can shop her site should sign up for her mailing list on her website. Also, keep an eye on her personal Instagram, where she has occasionally opened pre-orders for clothing items, like a crocheted baseball cap. Fans can also check out her brand's Instagram for a look at the kinds of items that may eventually become available on her website.

Victoria was in the ready-to-wear game for a long time before Project Runway began, so don't expect her site to be down for too long. She knows how to run a business and stock an online store. She's likely itching to get back to what she loves doing — making clothes for people around the world. And soon we'll all be able to shop her signature looks from the show or otherwise.