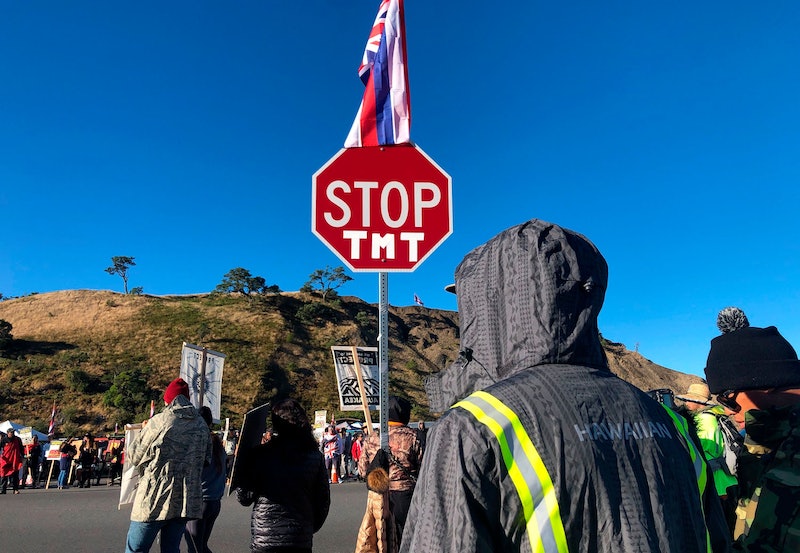 For days now, Native Hawaiians have been protesting the construction of a telescope on Maunakea, the Big Island's highest mountain and one of its most sacred sites to some Hawaiians. Actor Dwayne "The Rock" Johnson joined them on Wednesday, 10 days into the protests, which began after Hawaii Gov. David Ige said construction for the telescope would begin. Now, the mayor of Hawaii County is trying to reach a deal with protestors, who have halted all scientific operations on the mountain, while Native Hawaiians across the United States have launched solidarity protests.

During his visit, Johnson told protesters, “I stand with you.” Johnson is Samoan, but he spent some of his childhood in Honolulu, according to the Associated Press. “This is such a critical moment and a pivotal time," he said, as quoted by the AP. "Because the world is watching."

The protests on Maunakea started on July 15, and since then 35 elders, known as kūpuna, have been arrested, Trisha Kehaulani Watson-Sproat reported for Vox. Many are in their 70s and 80s, and they represent just how important Maunakea is to some Hawaiians.

Mauna a Wakea is the mountain's original name, with Wakea sometimes translated as "sky father," according to the mountain's visitor website. It is associated with three deities: Lilinoe and Waiau, and it is known as the place where the goddess Poli'ahu lives. The mountain also is home to precious natural resources and burial sites, according to Watson-Sproat.

Protests by the kūpuna and the protectors, known as kia’i, have been ongoing for a decade and are also steeped in repeated actions by the government that many say show its disregard of the Native people. TMT International Observatory, which is behind the project, called the Thirty Mile Telescope, has also said if protests continue, it may have to move the project to an alternate location in Spain, according to Vox.

Problems With Telescopes On Maunakea Have Been Ongoing

After a "rigorous five-year campaign spanning the entire globe," the TMT board decided in 2009 to build the telescope on Maunakea, according to the project's website. The telescope, which would become the largest in the northern hemisphere, is unprecedented in sensitivity and light-gathering power, and some have cited its ability to contribute to science as a justification for construction on land that's sacred to some Hawaiians.

Since then, protests from Native Hawaiians and lawsuits from environmental groups have been ongoing. In addition to sacredness, protesters and environmental groups cite negative impacts from the 13 telescopes already built on Maunakea over the years; for example, Vox reported that in 1995, the Sierra Club's pressure on the university led to a significant amount of accumulated waste being airlifted off the mountain.

Paulei Kawai, who grew up in Oahu and moved to North Carolina five years ago with her family, is now organizing a solidarity rally in Raleigh to support the protesters on Maunakea. She tells Bustle that many Native Hawaiians object not necessarily to the fact that the TMT is being built, but to how and where the government has gone about building it.

She says the government should "get together with the protectors of Maunakea and talk about other outcomes ... I think the government's just going about it the wrong way."

How The Telescope Is Tied To The U.S. Overthrowing Hawaii's Queen

The tensions between the government and Native Hawaiians are also deep-seeded, as Kawai notes, and they're tied to the beginning of the island's history, when businessmen and sugar planters overthrew Queen Lili’oukalani in 1893. Those men later ceded the land to the United States, starting what some Native Hawaiians believe was an illegal occupation.

"There's a lot of broken trust because of the history of Queen Lili’oukalani, and the people have just had enough," Kawai says.

Many Native Hawaiians think the government, which is aware of the sacredness of the land, should've talked to the people about the telescope's location before making a decision.

Jonathan Osorio, a native Hawaiian and a professor at University of Hawaii, told Inside Higher Ed that people painting the protesters as anti-science is inaccurate and misses what the protesters are really saying.

“I really object when people cynically employ the argument that it is all one sacredness to justify a project that offends so many people for so many reasons,” he told the publication. “The biggest problem with the TMT is that more than a decade ago, a number of state institutions decided that the telescope should be built and really brooked no opposition from anyone.”

Solidarity Protests Are Taking Place Across The U.S.

Kawai is one of many organizers who have planned solidarity protests in cities across the United States. Kawai's Raleigh rally will take place on July 28 at 5 p.m. ET. Protests have also taken place in San Francisco, and are planned in New York City on July 26.

Kawai says the point of the Raleigh rally is to stand with Hawaiians on Maunakea.

"We just want to let everyone know that we're here," she says. "Regardless of whether we're 5,000 miles away, Hawaiians are out here. We see what's going on. We're just disappointed and hurt."

On Thursday, Hawaii County Mayor Harry Kim made an offer to protesters that construction would not begin if they vacated their camp, according to Hawaii News Now. Protesters didn't seem immediately inclined to take his deal, which would require them to trust him — a difficult request after decades of tension.