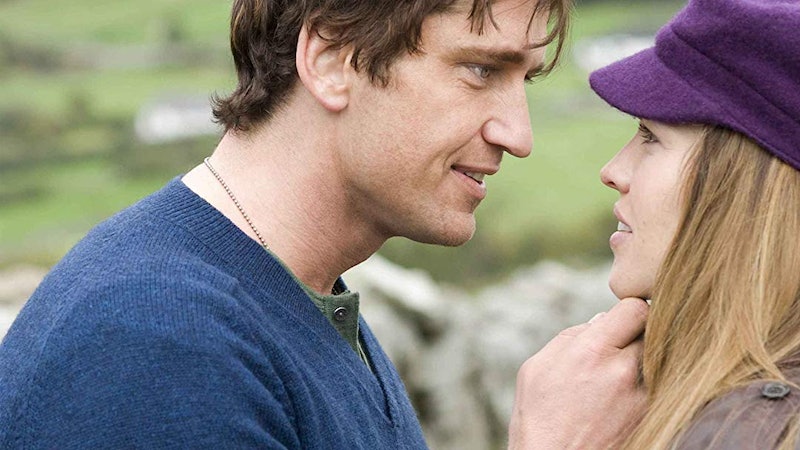 Cecelia Ahern's P.S. I Love You introduced readers to Holly Kennedy, a recently widowed woman who received a year's worth of letters from her late husband urging her to get back on her feet following his death. Now, thirteen years after Hilary Swank and Gerard Butler brought the book to life on the big screen, Ahern is back with a sequel.

Postscript finds Holly living a mostly content life with Gabriel, her new love. But when she's approached by fans of her story — who want her to share her famous letters on a podcast — she realizes she might not be done grieving her husband.

And for fans of the film, a Postscript film adaptation, with Hilary Swank reprising her role as Holly. But in the meantime, keep scrolling for exclusive excerpt of the long-awaited novel.

Tuesday morning. I hate Tuesdays because they’re worse than Mondays. I’ve already been through a Monday and the week still isn’t even half over. My school day begins with double math with Mr. Murphy, who hates me as much as I hate math, which is a lot of hate in one room on a Tuesday. I’ve been moved right up to the front row in front of Mr. Murphy’s desk so he can keep an eye on me. I’m quiet as a mouse, but I can’t keep up.

It’s lashing rain outside, my socks are still wet from the walk from the bus stop to school. I’m freezing cold and to add to it Mr. Murphy has opened all the windows to wake us up because one person yawned. The boys are lucky, they get to wear trousers, my legs are goose-pimpled and I can feel the hairs standing up. I shaved them up to my knee but cut my shin and it’s stinging through my gray woolen uniform sock. I probably shouldn’t have used Richard’s razor but last time I asked for my own razor, Mum said I’m too young to shave my legs and I can’t be bothered going through the mortification of asking her again.

I hate Tuesdays. I hate school. I hate math. I hate hairy legs.

The bell rings at the end of the first period and I should feel relief as the halls outside are flooded with students going to their next class, but I know we’ve another forty minutes to get through. Sharon is out sick and so the seat beside me is empty. I hate when she’s not beside me, it means I can’t copy her answers. She was moved beside me because she kept laughing, but she’s good at math so I can copy her. I can see the hallways through the glass panel beside the door. Denise waits until Mr. Murphy isn’t looking and she presses her face up against the glass, opening her mouth and pressing her nose up like a pig. I grin and look away. Some people in the class laugh, but by the time Mr. Murphy looks over, she’s gone.

Mr. Murphy leaves the classroom for ten minutes. We’ve to finish a problem he gave us. I know I won’t reach the solution because I don’t even understand the question. X and Y can kiss my arse. He’ll come back into the class stinking of smoke like he always does, and sit in front of me with a banana and a knife, looking at us all in a menacing way like he’s a badass. Someone slides into the seat beside me. John. I feel my face go red with embarrassment. Confused, I look over my right shoulder to the wall where he normally sits, with Gerry. Gerry looks away and down at his copybook.

“What are you doing?” I whisper, even though everybody else is talking, probably finished their work. Even if they’re not finished, it won’t matter, Mr. Murphy will always ask me.

“Me mate wants to know if you’ll go out with him,” John says.

My heart thuds and I feel my mouth dry up.

“Is this a joke?” I ask, annoyed and mortified at the same time.

I roll my eyes. Gerry is the most gorgeous guy in class — correction, in the year. He can have anyone he wants and this is most likely a joke.

I’m afraid to turn around and look at Gerry again. My face is full on flaming red. I much preferred sitting in the back row where I could always stare at Gerry whenever I wanted. Everyone likes him, and he’s gorgeous, even with his new train tracks, and he always smells nice. Of course I fancy Gerry, most girls — and Peter — do. But me and Gerry? I didn’t think he even knew I was here.

I swallow hard. If I say yes and it’s a joke then I’ll be mortified. But if I say no and it’s not a joke, I’ll never forgive myself.

“Yeah,” I say, and my voice comes out all funny.

“Cool,” John grins and hurries back to his seat.

I wait for jeering, for everyone to laugh and tell me it’s a joke. I wait to be humiliated, afraid to turn around, sure that everyone is silently laughing at me. There’s a bang on the open door and I jump with fright. Mr. Murphy is back, with his banana and his knife, stinking of smoke.

There’s a chorus of yeses.

“Then let’s go through it, shall we?”

I’m so self-conscious that everybody’s eyes are on me that I can’t even think. And Gerry, he must be thinking I’m an absolute dunce.

“OK, take the first part,” Mr. Murphy says, unpeeling the banana and slicing the tip. He never eats the tip, he hates the black pointy part. He cuts a thin slice of banana and eats it off the knife.

“John has thirty-two chocolate bars,” he says slowly, patronizingly, and a few people laugh. “He eats twenty-eight. What does he have now?”

“Diabetes, sir!” Gerry shouts out, and everybody cracks up laughing.

Even Mr. Murphy laughs. “Thank you for that, Gerry.”

“Since you think you’re so smart, finish this off for us.”

And he does. Easy as that. I’m saved. I’m grateful but too embarrassed to turn around. Something hits against my leg and lands at my feet. I look down and see a scrunched-up piece of paper. I pretend to be leaning down to get something from my bag and while Mr. Murphy has his back turned and is writing on the board, I open the ball of paper and smooth it open on my lap.

It wasn’t a joke. Promise. Wanted to ask you for ages.

I grin, my heart pounding, my stomach alive with butterflies. I shove the letter into my bag and as I do, I sneak a glance behind me. Gerry is watching me, big blue eyes, kind of nervous. I smile, and he smiles. Like a private joke only the two of us are in on.