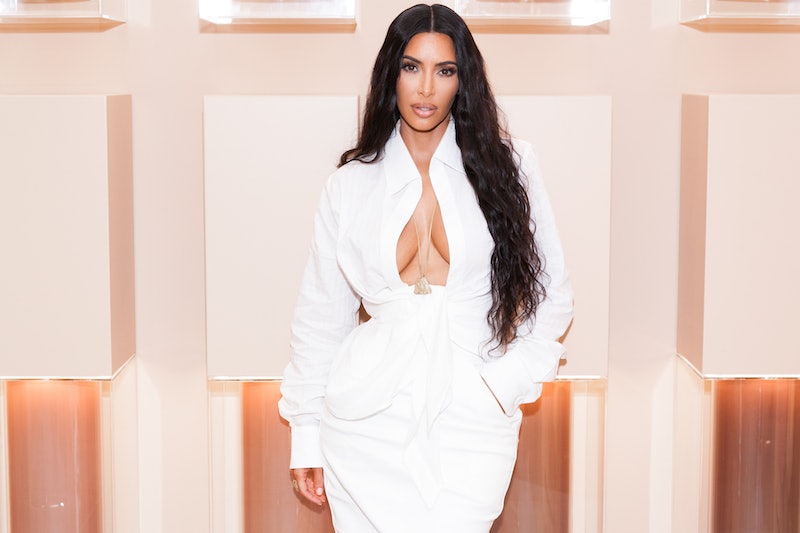 Fans of the Kardashian-Jenner family quickly responded when, on July 29, Kim, Khloe, and Kendall were heard commenting on Kim's weight on Instagram Stories. Kendall told her sister, "I don't think you're eating. You look so skinny," to which Kim responded, "What? Oh my god, thank you!" In a later video, Khloe reportedly said, "She’s anorexic here," referring to Kim's waist. People all over social media quickly voiced their concern that calling someone "anorexic" is never a compliment. And Bustle spoke with experts who agree that using the term casually can have really damaging effects.

“When the term anorexic is used casually, there is an association between the person who is being called anorexic and their thinness,” Dr. Danielle Forshee tells Bustle via email. Dr. Forshee points to the fact that a defining feature of anorexia is "a disturbance in the way you perceive the shape of your body or your weight," and that associating a particular body type with the disease can reinforce the dangerous and incorrect idea that anorexia can lead to that body type.

Part of the issue of using the term casually is that it distorts how dangerous eating disorders really are. According to the National Institute of Mental Health (NIMH), eating disorders are serious mental illnesses that have the potential to be fatal; the National Association of Anorexia Nervosa and Associated Disorders (ANAD) notes that anorexia is the most deadly mental illness, with one person dying as a direct result of the disease every 62 minutes. According to NIMH, symptoms include obsessiveness around food, weight, body shape, and extreme restrictions around how much food the person eats, and health risks associated with anorexia include bone loss, anemia, organ failure, and death from starvation.

Bonnie Brennan, Regional Managing Director-Clinical at Eating Recovery Center in Denver, Colorado, tells Bustle via email that the consequences of using this term lightly, or outside of a clinical context, can be huge. "Using the word 'anorexic' casually suggests that Anorexia Nervosa is something to strive for," she says. "Many persons with AN will tell you that it doesn't matter what the number on the scale says, they just never feel good enough, their lives feel hopeless and they feel trapped in a world in which food and their body is terrifying." Brennan further notes that using the word "anorexic" casually, or as a compliment, invalidates "the huge amounts of pain that persons with eating disorders, and their families and friends, go through, on a daily basis, trying to get out of the brutal consequences” of the illness.

For people in recovery from anorexia or other eating disorders, this usage of the term can be harmful, Dr. Forshee says. "If there is a celebrity [who] is being [described] as ‘anorexic’, despite the fact that that celebrity does not truly suffer from anorexia, it may lead that fan down a path of questioning their own weight or [body] shape," she tells Bustle.

Brennan says that the attention surrounding Kardashian-West's comments "speaks to the need for more public awareness about the dangers of AN and other eating disorders." Dr. Forshee suggests that, if you overhear this casual usage in your own life, it can be helpful to ask the person who used the term to clarify what they mean, and take it as an opportunity to educate them about the dangers of anorexia. "Gently let them know that while they likely didn’t mean any harm, they may be inadvertently supporting a disease they are unsure this individual may or may not have," she says.

And this can have important effects in how we talk about eating disorders in our daily lives. By being mindful of the ways in which language is used, and avoiding the minimization of others’ suffering, we can better support those living with eating disorders and in recovery.