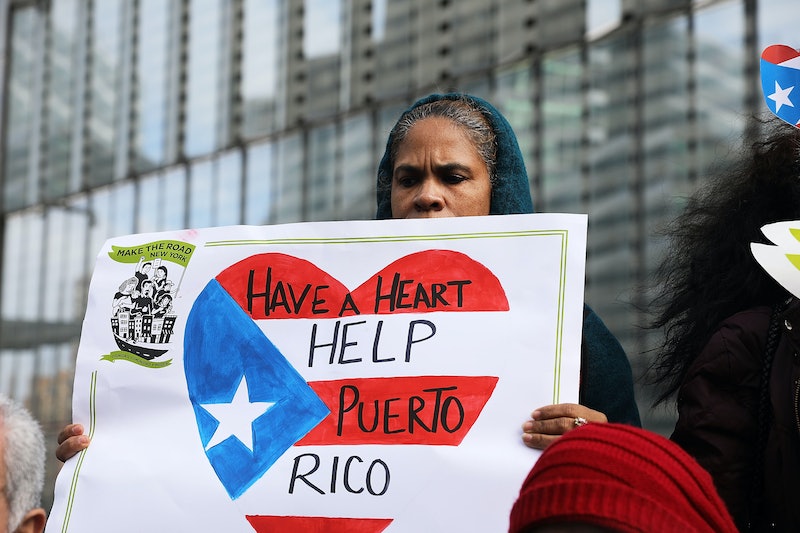 The same day the U.S. Senate declined to advance Green New Deal legislation, Puerto Rico passed the Energy Public Policy Act, which puts the U.S. territory on course to using 100 percent renewable energy by 2050. The bill passed the Puerto Rican Senate by a vote of 21-4, according to Forbes, and now heads to the desk of Gov. Ricardo Rosselló, who has already indicated his support for it.

The legislation bans coal plants on the island starting in 2028, limits the approval time for commercial and industrial projects using solar energy, removes taxes on solar equipment, and implements various other policies that will help Puerto Rico transition to 100 percent renewable energy in a little over three decades. Rosselló said on Twitter that the bill will help create "a more resilient, reliable and cleaner energy grid" for the island after the destruction the territory suffered during Hurricanes Irma and Maria in 2017.

"Before Hurricanes Irma and María destroyed our island in 2017, close to 50% of the island’s power generation came from oil-burning plants, and 17% came from coal," Rosselló wrote on Twitter on Monday. "Since then, we have set forth the foundations for the transformation of our energy grid."

But Puerto Rico's passage of the ambitious climate change bill came as the U.S. Senate rejected federal legislation to fight global warming. On Tuesday, the Senate declined to begin debate on the Green New Deal, the sweeping bill that would seek to alleviate the effects of climate change and help reduce economic inequality in one fell swoop. While speaking against the bill, Republican Sen. Mike Lee delivered a widely-mocked speech in which he displayed images of Ronald Reagan riding a dinosaur and Aquaman atop a sea horse, explaining that he was addressing the bill with "with the seriousness it deserves."

However, no Senate Democrats voted for the Green New Deal bill, either, with many characterizing it as publicity stunt by Majority Leader Mitch McConnell. Several Democrats pointed to the fact that McConnell put the bill up for a vote without holding any hearings on it, and Rep. Alexandria Ocasio-Cortez — who proposed the initial Green New Deal legislation in the House of Representatives — said on Twitter that she "encouraged [Democrats] to vote present" to protest the lack of hearings.

In Puerto Rico, by contrast, the Energy Public Policy Act faced comparatively little opposition. Despite some tussles between the territory's two chambers of Congress about the details of the bill, it ultimately passed by a margin of 18 votes in the 30-member Senate — far more than was needed to send it to the governor's desk.

The director of public policy in Puerto Rico for Sunrun, a solar company that consulted on the bill, told Fast Company that after Hurricane Maria devastated Puerto Rico's electric grid in 2017, public opinion surrounding the territory's energy use began to change.

“After Hurricane Maria, a new consensus was really built in Puerto Rico,” Javier Rua-Jovet said. “Everybody knew that a different system had to be built.”