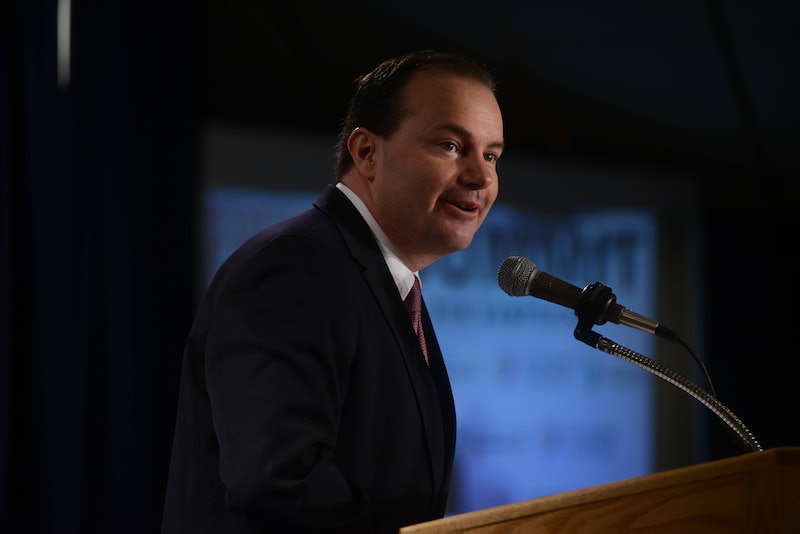 In a speech he claimed was "a joke," Sen. Mike Lee denounced the Green New Deal on the Senate floor Tuesday by claiming that it would force Hawaiians to ride seahorses, predicting that babies will save the world from global warming, and pretending that the events of Sharknado actually happened. The speech was met with widespread mockery, and Rep. Alexandria Ocasio-Cortez remarked later that "if this guy can be Senator, you can do anything."

"This is the real solution to climate change: Babies," Lee said at the end of the speech while displaying a picture of some babies. "More people mean bigger markets for innovation. More babies will mean more forward-looking adults — the sort we need to tackle long-term, large scale problems."

That wasn't the only visual aid Lee used. Over the course of his screed, he also presented the Senate with screenshots from Sharknado 4: The 4th Awkakens and Return of the Jedi, a picture of Aquaman riding a seahorse from the 1970s cartoon show Super Friends, and finally, an illustration of Ronald Reagan firing a machine gun while riding on the back of a dinosaur. He claimed that the last image has "as much to do with overcoming Soviet communism in the 20th century as the Green New Deal has to do with overcoming climate change in the 21st."

"It was only 2016 — as viewers of the Syfy Network will well remember — when climate change hit home in Utah, when our own state was struck not simply by a tornado, Mr. President, but by a tornado with sharks in it," Lee said while showing a screenshot from the fourth Sharknado film. "These images are from the indispensable documentary film, Sharknado 4." To be clear, neither Sharknado 4 nor any of its predecessors are documentaries.

At one point in the speech, Lee incorrectly claimed that "the Green New Deal calls for the elimination of all airplanes." It doesn't; as PolitiFact noted, the Green New Deal resolution introduced by Ocasio-Cortez doesn't use the word "airplane" once, although Lee isn't the first Republican senator to spread this falsehood. He went on to say that the elimination of airplanes (which again, isn't being proposed by anyone), would force Americans to ride seahorses, like Aquaman did in Super Friends, if they want to get to and from Hawaii.

"Now, I’m the first to admit that a massive fleet of giant, trained seahorses would be really, really awesome," Lee said. "But we have to consider a few things. We have no idea about scalability, domestic capacity in this sector. The last thing we want is to ban all airplanes and only then find out that China or Russia may have already established strategic hippocampus programs designed to cut the United States out of the global market."

Lee's speech also appeared under his byline in The Deseret News, and the headline claimed that it was "a joke." However, Lee truly does oppose the Green New Deal, so the overall point he was making — that the legislation proposed by Ocasio-Cortez wouldn't adequately halt global warming — is one that he sincerely believes.