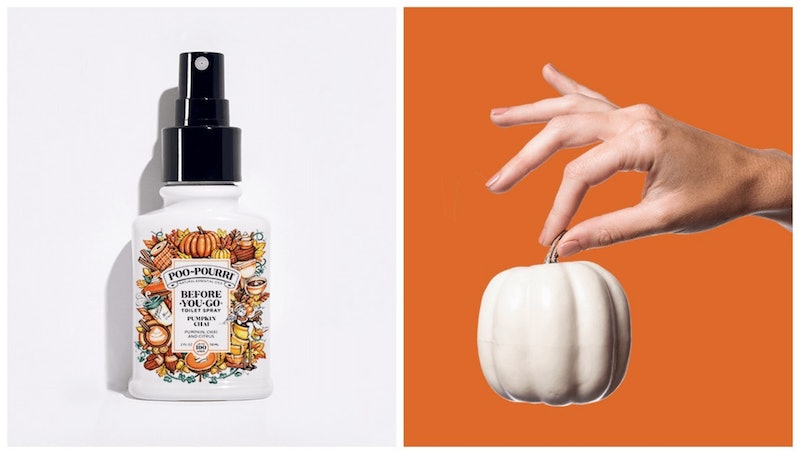 And today in things I did not ever imagine I would be saying, we have this: Pumpkin Chai Poo-Pourri is a thing now. You heard me: The pumpkin spice phenomenon has become so deeply tied up in the fall season that you can legit poop pumpkin spice-scented poops at this time. As much as I love both autumn and pumpkin spice, this is… A Lot to deal with, so please excuse me if I’m at less than my best during this difficult time.

Poo-Pourri — as you are probably already aware — is an essential oil-based spray meant to be applied to a toilet bowl before you use it in order to cut down on the smells that typically arise from pooping. The company was founded in 2007 and spread mainly by word of mouth for several years; then, in 2013, an exceedingly memorable YouTube video brought it into the mainstream. The original version of the product is a citrusy scent with notes of lemon, bergamot, and lemongrass — but in the years since its debut, Poo-Pourri’s scent range has expanded considerably, ranging from the fruity to the floral and everything in between.

Every so often, a limited-edition scent will arrive, as well; this past spring, for example, saw the launch of a seasonal spray called Honey Poo. Knowing this, it was really only a matter of time before Poo-Pourri hopped on the pumpkin spice bandwagon, and, well… here we are. As the video about Pumpkin Chai Poo-Pourri that just hit the Poo-Pourri YouTube channel puts it, pumpkin has officially peaked.

The Pumpkin Chai variety forgoes the typical coffee aroma that many pumpkin spice scents include (not for nothing do we credit Starbucks’ take on the Pumpkin Spice Latte with the rise in popularity of the pumpkin spice flavor and scent profile as a whole); interestingly, though, there isn’t any tea in the scent, either. Rather, Pumpkin Chai Poo-Pourri consists of “a seasonal blend of pumpkin, cinnamon, and citrus natural essential oils.” Available at a price of $9.95, the two fluid ounce bottle is good for around 100 sprays. If, as the instructions for Poo-Pourri state, you spritz three to five sprays in the bowl each time before you go, that means one bottle will last you between 20 and 33 trips to the bathroom.

Not a lot has been written about the science behind Poo-Pourri, so it’s tough to say whether the product itself actually works or whether it’s just good ad copy. Poo-Pourri’s How It Works page claims that, “when spritzed into the toilet bowl before-you-go, Poo-Pourri’s pure blend of natural essential oils creates a film on the surface of the water,” forming a “protective barrier [that] traps odor under the surface, before it ever begins”; however, as consumer research site HighYa points out, the website “doesn’t provide any references for this proof.” HighYa does also note, however, that although there aren’t any scientific studies readily available explaining the phenomenon, there’s a good deal of anecdotal evidence all over the internet extolling “the effectiveness of essential oils… for trapping (not just covering up) unwanted bathroom odors.”

The Beauty Brains, a website run by cosmetic scientists with the goal of helping consumers “cut through the confusing, misleading, and sometimes false information that beauty companies bombard you with,” agrees that, theoretically, this explanation could actually be the case, based on how fragrances actually work. “Applying a film on the water to seal in odors in theory could help reduce some of the scent problem,” the site explains. “And since the fragrance oils have a higher coefficient of diffusion than the ‘bad odors,’ they should lift up and fill the room, helping to mask those smells that do escape.” While the website didn’t run Poo-Pourri through any sort of rigorous testing governed by the scientific method, the writers “presume that Poo-Pourri has optimized their oil-to-fragrance ratio to get the right balance of the toilet bowl coverage and fragrance ‘bloom.’”

I will be perfectly honest: I have never totally been able to get behind the idea of Poo-Pourri or other similar products, largely because I can’t help but feel that it kind of… contributes to the whole “YOU SHOULD BE ASHAMED OF YOUR POOP” attitude humans have spent so long cultivating. We all poop. It’s necessary. And it doesn’t have to be embarrassing or a big deal. But we just treat it like it is because we’ve somehow evolved such that we really, really care about appearances — and apparently it is unacceptable from an appearances standpoint to acknowledge basic bodily functions. Poo-Pourri’s aim is literally to hide the fact that you’ve pooped, so it feels like it’s just another thing telling us that our bodies are bad and we should feel bad.

On the other hand, though, realistically speaking, most of us don’t like encountering poop — either it itself, or just the smell of it — which makes sense, too. Remember that whole thing where humans are hardwired to avoid things that could make us sick? That’s what’s going on here: We’re disgusted by poop and its smell because coming into contact with it could make us sick — that is, it’s a survival instinct. And since we find encounters with poop and its smell such an unpleasant experience, items that minimize the amount of time we have to spend around poop can be small mercies. That’s obviously where Poo-Pourri comes into play: It helps us manage our disgust reaction. Indeed, you could even argue that using Poo-Pourri is a courtesy extended to whoever uses the toilet after you — that is, you’re helping them manage their disgust reaction, too.

Heck, maybe that seeming contradiction is the whole point of Poo-Pourri — or at least, the point of its brand identity. Because despite the fact that the product is aimed at hiding poop smells, its marketing campaign has always been very straightforward about the fact that poop happens in the first place. So, y’know, there’s that.

Anyway, I have just spent far too long philosophizing about poop, so I’m going to wrap this up now. My point is that if you want the aftermath of your pooping activities to smell like Pumpkin Chai, you can. If that’s not for you, that’s OK, too.